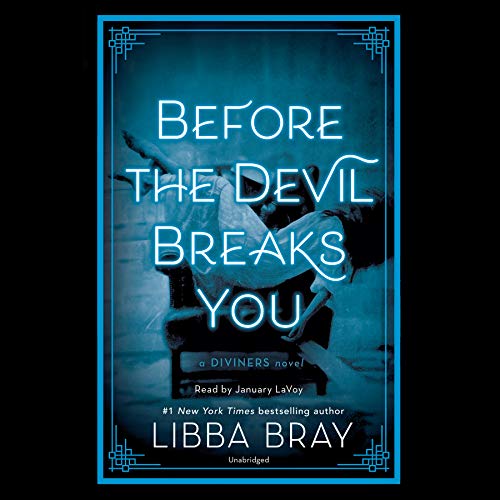 Before the Devil Breaks You

The Diviners are back in this thrilling and eerie third installment by number one New York Times best-selling author Libba Bray.

After battling a sleeping sickness, The Diviners are up against a group of new and malevolent foes - ghosts! Out in Ward's Island sits a mental hospital full of lost souls from people long forgotten. Ghosts who have unusual and dangerous ties to the Man in the Stovepipe Hat, also known as the King of Crows.

With terrible accounts of murder and possession flooding in from all over New York City, the Diviners must band together and brave the ghosts haunting the asylum to bring down the King of Crows.

Heart-pounding action and terrifying moments will leave you breathless in the third book of the four-book Diviners series by number one New York Times best-selling author Libba Bray.

"This story broke my heart and made me laugh and gave me hope - and really, what more can you ask of a book than that? I loved it, and I have a feeling you will too." (Jennifer E. Smith, author of Windfall and The Statistical Probability of Love at First Sight)

"Narrator January LaVoy shines in the third installment of The Diviners series.... Despite the considerable number of characters and their intersecting storylines, LaVoy never misses a beat, demonstrating a wide range of vocal dexterity and skill that creates the impression of an ensemble. Listeners are encouraged to begin at the beginning of this planned four-audiobook series and enjoy LaVoy's mastery." (AudioFile)

What listeners say about Before the Devil Breaks You

Listen it for the Narrater, January LaVoy.

Don’t get me wrong i love the diviners series. I am so invested in Evie, Geracao and Sam’s love triangle. Love Theta, Memphis and the darling Henry.

But January steals the show, she brings the story alive. Her voice modulation for each character is so unique.

Gripping Story and Narrator made it extremely enjoyable. The scary parts were not so scary as it's a YA and overall I enjoyed it. completed in one day....that's how engaging and fast paced it was.

Not Devil...This book broke me!!

Everything that was missing with the last book was highly compensated in this one. The last book was much slower in pace but it did provided alot of build-up for this book. This book was much more fast paced, more exciting, many things coming to the front. The characters in this book and the way the author writes them is amazing. We always get to learn more about each of them in every book. The complexity of each character, the storyline build-up, the writing everything is on point. Many things happened in this book that shocked me, made me grieve, made me laugh, frustrated me. You can't help but feel for these characters. That's how much i got invested in this story.
January LaVoy just gets better and better with each book.
Libba bray (the diviners) + January LaVoy = Deadly Perfection!!!
Can't wait for the next one.

I love this series so much. It's so well done. I can't wait to find out what happens in the final book. It's going to be an unbearable wait! And the narrator is fantastic, she really captures each character's personality.

I want the next book NOW!!!

I am having a hard time lately writing reviews but I wanted to tell you all to READ THIS SERIES!

I love this series so much, I honestly went into this book thinking it was going to be the last book in the series so was pleasantly surprised to get to the end and find out no it is not the end there will be more of these fabulous characters, which made me very happy!!

January LaVoy's narration of this series couldn't be more perfect every character has their own voice and inflection and you are never left wondering who is speaking. I will always listen to these on audio.

Can I have the next book NOW Please!!

Would you try another book from Libba Bray and/or January LaVoy?

debatable at this point!

What could Libba Bray have done to make this a more enjoyable book for you?

This was a filler book, nothing got accomplished. All this book did is set it up so you have to read the next one. Very disappointing.

when theda saved them all and revealed her powers.

If you could play editor, what scene or scenes would you have cut from Before the Devil Breaks You?

none, would have added a bunch instead of just leaving every storyline open.

Very disappointed in the way this turned out to be a filler book to lure you into the 4th book. Nothing was accomplished in this book, very unsatisfying.

Another part in the series, and it's divine!

Darker than previous books, but equally engaging and good. I was surprised to see few characters killed off, but it made the story that much more dramatic and grand.

Another amazing performance by January LaVoy.

Highly recommended if you liked the previous parts of The Diviners.

Why so much sex added in? It felt like author trying to fill quota. In previous books it was just the right amount. Sometimes subtle is so much better. Particularly subtle good when this is supposed to be a young persons novel. Really unnecessary.

Loved this mix of history, humor and supernatural storytelling. I highly recommend! Best of the books, so far, in this series.

This book is near perfection. It blows my mind what Libba has done with this story—from a writing perspective and a topical one. She somehow manages to balance a beautifully diverse, uniquely voiced ensemble cast of characters with a chilling storyline full of thrills, socio-political commentary on America in the 1920s, our treatment of mental health, political leanings, and how a person can be coaxed into extremism or passivity. She's not afraid to point out the gaping wounds of America's history and the subsequent ghosts we must not forget. It is a book—a series—SO necessary under today's leadership, and one I truly hope makes waves when it comes to an end.

On a story level, Libba is a master weaver. She highlights the colors of each character, creating their unique struggles, hopes, dreams, ambitions and then spins a whole tapestry in which they are worked seamlessly together without losing that which makes them unique. She shows their personalities vividly through their dialogue and responses to a situation, the way they cope with tragedy and victory, the way they interact with the world around them. She makes me die laughing in places (usually at Sam and Evie's tomfoolery), swoon and blush (again usually at Sam and Evie), weep profusely, and grit our teeth in anger. Her world is incredibly immersive, the 1920s grit of New York painted in a few simple words.

This narrator is by FAR my favorite of the entire pantheon. Her ability to spin unique voices for a myriad of characters—major and minor—and to hit the emotional beats every time is completely unmatched. Her renditions of Evie's voice in particular during this audiobook made me weep in places—from her brightest teases to a scene full of vulnerability after trauma. I look froward to listening to this again!

Started off reading the Emma Doyle series. Then I picked up the second book of these series. and then started reading book 1 and 3. Now Libbra Bray is my utmost favorite author. This book is completely suspenseful. I absolutely loved the ending. I did not expect it to end how it did and that is what I absolutely love about a good book. It keeps you wanting more. I was mad that it was over. It's also funny because I have the fourth book waiting in my library already but I still wanted to cry because I was upset this one was over too. I will definitely be reading the whole series over again after a while. I can't wait until I read the last book.

This book raises the stakes! It is very good!

There is a lot happening in this book, it is a perfect penultimate story, so excited for the ending!

The first half builds on the first two. I was engaged and felt like the characters were growing.

The second half feels like Libba Bray knew she was ahead and put in the backups. It quickly lost footing. There were "Romantic" parts that were cringe.

Overall the book was fine but honestly I'd only recommend this series as a duology.

The narator makes this book even better!

I'm in love with the story and with the characters! But oh my God, January LaVoy! How is she doing that? I always know who is talking before it's specified! And yes, there are many characters but still they each has their own distinct anf really well fitted voice, and only one person does all that!
It's mind-blowing!
I'm definitely going to search for more book read by LaVoy!

Have really been enjoying this series and January LaVoy is an amazing narrator her performance is excellent brings all the characters to life. Going onto the final book now

The skill of the reader is off the charts, listen to this book on that premise alone. Fun book series that is both light yet deep. Yes I know, a bit of a paradox. But true nevertheless. Highly recommend.

Absolutely thrilling from start to finish! The best in the series (so far!) I can't wait to dive into the final novel.

Better than the previous book in the series

At some points the anti-racism themes were a bit heavy-handed and preachy. This is a shame because the story was actually quite enjoyable.

Another amazing book.
I laughed and I cried.
There were parts where I was literally terrified and I am so happy as I didnt think Libba could continue her streak to thrill after the amazing last book.

best book in the series

this was a really good one. You could see it as a filler for the story but I thought it was more building up to the last book. It took up many important subjects like how mentally ill people were treated back in the day. Also I've waited for Libba Bray to do something BIG, cause I thought she was playing a bit safe (to the point where it was unrealistic) but damn did she deliver this time. I was that "F*CK GO BACK" button meme lol

Amazing in every way

The narration is still amazing and makes the already great writing even more enjoyable! The chracters were fleshed out even more in this book and I'm really looking forward to the next book!!

Thanks to Libba for another rip roaring Diviners adventure. I was hooked to the story, which had lots of surprises and cannot wait for the next adventure.

I love this rag tag group of misfits

I enjoyed this book very much. January LaVoy's array of voices makes the audiobook that much better. Sam and Evie Forever. How cute is Isaiah. I would recommend this book to YA lovers.