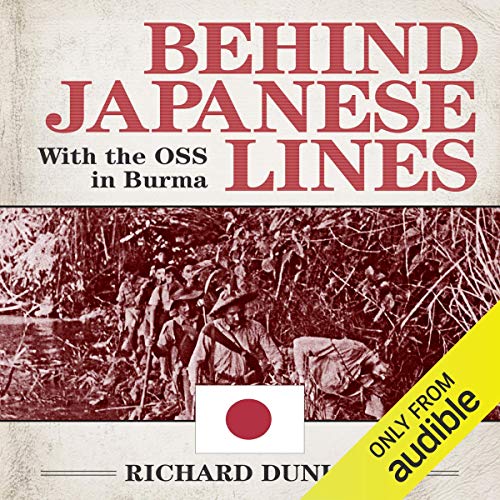 The extraordinary firsthand account of an American special forces unit in the jungles of southeast Asia and their guerilla operations against the Japanese during World War II!

In early 1942, with World War II going badly, President Roosevelt turned to General William "Wild Bill” Donovan, now known historically as the Father of Central Intelligence,” with orders to form a special unit whose primary mission was to prepare for the eventual reopening of the Burma Road linking Burma and China by performing guerilla operations behind the Japanese lines. Thus was born OSS Detachment 101, the first clandestine special force formed by Donovan and one that would play a highly dangerous but vital role in the reconquest of Burma by the Allies.

Behind Japanese Lines, originally published in 1979, is the exciting story of the men of Detachment 101, who, with their loyal native alliesthe Kachin headhunters fought a guerilla war for almost three years. It was a war not only against a tough and unyielding enemy, but against the jungle itself, one of the most difficult and dangerous patches of terrain in the world. Exposed to blistering heat and threatened by loathsome tropical diseases, the Western-raised OSS men also found themselves beset by unfriendly tribesmen and surrounded by the jungle’s unique perilsgiant leeches, cobras, and rogue tigers.

Not merely a war narrative, Behind Japanese Lines is an adventure story, the story of unconventional men with an almost impossible mission fighting an irregular war in supremely hostile territory.

Drawing upon the author’s own experiences as a member of Detachment 101, interviews with surviving 101 members, and classified documents, Dunlop’s tale unfolds with cinematic intensity, detailing the danger, tension, and drama of secret warfare. Never before have the activities of the OSS been recorded in such authentic firsthand detail.

What listeners say about Behind Japanese Lines

The OSS in Burma

Would you consider the audio edition of Behind Japanese Lines to be better than the print version?

Yes. The audio version is more exciting. The material lends itself to dramatic interpretation.

The ingenuity and steadfastness of the indigenous guerillas. What resourceful, brave, intelligent, loyal allies were they.

Which character – as performed by David Baker – was your favorite?

All of the characters are riveting.

Yes. The descriptions of torture are harrowing but also necessary to understand fully the barbarous ways of the Japanese military. Simply outrageous. They got what was coming to them.

Would make for a fabulous movie, if a very expensive one (given location, logistics, and the formidable environment/weather).

Weaves an Amazing Tapestry of History

I listened to this book entirely while preparing my classroom for the upcoming school year. From the very first chapter, I was hooked. The characters became so vivid to me that I cried when some of them passed away. My heart also celebrated with them at their victory feast and I felt angry at the unexpected cruelty of the Chinese upon their Allies. It is an amazing piece of history with narratives from multiple sources and perspectives woven together to make an amazing tapestry of this little known history which was vital to the overthrow of Imperial Japan.

The book was ok

The book was a little disjoined for me as it seems he keep going back and forth in the timeline. It was still interesting to hear about what happened to the unit.

Much better than expected

I learned a lot about a less popular side of WWII. Oh yes there are movies about Merrill's Marauders. This story is about the people and leaders who prepared the groundwork for Merrill to be successful.
This story should have its own movie and place in history. Sad what has become the current story of Burma

One of the best I have read since joining Audible. Well performed and full of detail, with interesting facts about the OSS in Burma.

Good book of the OSS behind Japanese lines in WW II. Hard to follow as the names of the villages and major characters are not familiar. But once past that the exploits of the OSS and their native allies is great.

The book is missing context of the overall campaign. The NCAC front was only a small part Burma campaign yet the author makes it seem like the Americans were the only nation attempting to liberate it from the Japanese.

Burma - Where the OSS Began

Before the CIA, there was the OSS. Working closely with Burma's native Kachin behind Japanese lines jungle warfare came of age.
This is well documented and brutally honest account of what happened in the western Pacific theater of WWII.

I learned something new from this book,that the OSS had fought the Japanese during WW2. I did not know we employed the native people from Burma to fight along side of the U.S. IS A very gripping story well told

I wish there were more books about CBI theater on Audible. This book is an amazing story that is almost hard to believe.

Interesting story, winning against the odds.

It's a slow read, but it's real, so I'm not surprised. It's an epic struggle. I guess you could say that, for the Japanese, this was their Vietnam.

The story is very interesting and the reader did justice to it.

A well written book and also interesting. It covers a period of world war ll which has very little written about.