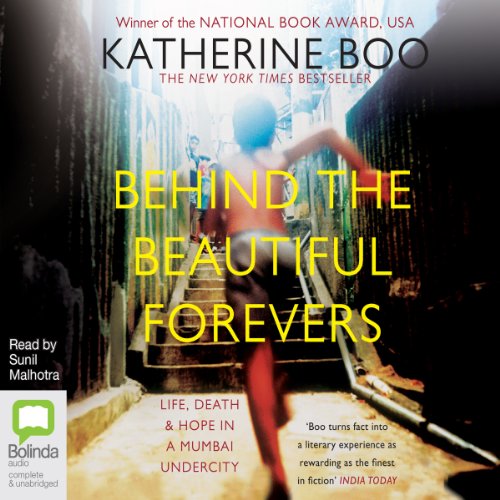 Annawadi is a makeshift settlement in the shadow of luxury hotels near the Mumbai airport, and as India starts to prosper, Annawadians are electric with hope. Abdul, a reflective and enterprising Muslim teenager, sees "a fortune beyond counting" in the recyclable garbage that richer people throw away. Asha, a woman of formidable wit and deep scars from a childhood in rural poverty, has identified an alternate route to the middle class: political corruption.

With a little luck, her sensitive, beautiful daughter - Annawadi’s "most-everything girl" - will soon become its first female college graduate. And even the poorest Annawadians, like Kalu, a 15-year-old scrap-metal thief, believe themselves inching closer to the good lives and good times they call "the full enjoy". But then Abdul the garbage sorter is falsely accused in a shocking tragedy; terror and a global recession rock the city; and suppressed tensions over religion, caste, sex, power, and economic envy turn brutal.

As the tenderest individual hopes intersect with the greatest global truths, the true contours of a competitive age are revealed. And so, too, are the imaginations and courage of the people of Annawadi.

"[An] exquisitely accomplished first book. Novelists dream of defining characters this swiftly and beautifully, but Ms. Boo is not a novelist. She is one of those rare, deep-digging journalists who can make truth surpass fiction, a documentarian with a superb sense of human drama. She makes it very easy to forget that this book is the work of a reporter…. Comparison to Dickens is not unwarranted." (Janet Maslin, The New York Times)
"The book plays out like a swift, richly plotted novel…. Boo gives even the broadest themes (the collateral damage of globalization, say) a human face. And there are half a dozen characters here so indelible - so swept up in impossible dreams and schemes - that they call Dickens and Austen to mind." ( Entertainment Weekly)
"Must read. Katherine Boo Behind the Beautiful Forevers. A Mumbai slum understood and imagined as never before in language of intense beauty." (Salman Rushdie)

What listeners say about Behind the Beautiful Forevers

Loved every line of this book. As a documentarian I would use this book as a guide to all my future works. Creative nonfiction is a niche genre and Boo is probably the best at it. I would love to inhabit her mind and her heart to understand how to do this kind of work.

Where does Behind the Beautiful Forevers rank among all the audiobooks you’ve listened to so far?

Highly rated but have listened to many exceptional books

Understanding what survival means in a Mumbai slum AND Katherine Boo's note at the end that contextualises so much.

Which character – as performed by Sunil Malhotra – was your favorite?

Abdul - who kept wanting a life that meant more

My first listen of Behind the Beautiful Forevers was from my local library. Once I'd read it, I read it through a second time immediately & then I bought my own copy here. Although I will never forget this story it is so compelling & so beautifully told I know I will read it many more times.

I hadn't read the description of this book when I first picked it up - I completed the book & it was only when I got to the epilogue that I discovered it was non-fiction. The narrative reads like a beautiful fiction but the story is true. The words of the characters are those told to the author during the 6 months she spent in the Indian slum where the story is set, or they are what she herself witnessed.

So now the authenticity I felt from the story is explained. It feels authentic because it is authentic.

The story gives insight into lives that people living in western cultures generally will not encounter. It is the story of deep poverty, deeper poverty & deepest poverty. And there are few ways to get out of the slum. The people in the story all want to improve their lives, but each has a different belief in how to do so. Hard work? Education? Corruption seems the surest method & it is not necessarily about having the most power - just about having more than the next person, and then being ruthless about using it.

While the stories of the people in this book are true, it is a book you will enjoy for the story itself and the way it has been told. Katherine Boo has deliberately chosen people who would not necessarily have shared their story with anyone else and therein lies the book's real gift.

This is another book that has gone to the top of my all time favourites.

Vibrant tale of life in a Mumbai shanty slum

What an unexpected delight! “Behind the Beautiful Forevers” is a tale of life in a slum shanty under the flight-path at Mumbai airport, a work of fiction but grounded in carefully researched real lives, such that it won a prize for non-fiction. I heard of it when I booked to see the play David Hare has written from the book, soon to be performed at the National Theatre.

The action takes place in a shanty originally started by Tamil workers brought to Mumbai as cheap construction workers for the burgeoning Mumbai airport. The desperate poverty is regarded as demeaning India’s image to the businesspeople flying into its financial capital, so it’s entrance is hidden behind a large hoarding, advertising ceramic tiles that will “stay beautiful forever.” The optimism and entrepreneurial spirit of the people wrestles with powerful currents of change – tensions between Moslem and Hindu, the continuing legacies of the caste system and of the British Raj, the effects of boom and bust. And even terrorism. The residents are under constant threat of eviction from their illegal slums, from violence and robbery from other slum-dwellers and from the corruption of politicians, police and the legal system. But their optimism still shines through, so the book is not just an education, but unexpectedly uplifting. Thoroughly recommended.

well researched and written account of life in a Mumbai slum very rare to see such reporting about this subject. quite brilliant

Great book, with interesting twist at the end.

What made the experience of listening to Behind the Beautiful Forevers the most enjoyable?

Characters overcoming, and succumbing to adversity. In a hard, but colorful world.

What other book might you compare Behind the Beautiful Forevers to, and why?

Last man in tower by Aravind Adiga. It is also set in India, and deals with human interactions, and the how relationships are distorted by money, greed, and jealousy.

This book is very well written. I could see, smell, and taste the slums. I felt like I knew the inhabitants personally by the end.

Great read. A big eye opener to the life of an Indian slum. definitely recommended

I lived in India in the mid 90's and had the pleasure of meeting many children of the streets. I would say to one "do you know where I can rent a truck to move my things?" The children would rally around and within half an hour my stuff would be on its way to my rented abode. As in Katherine's story I found the kids masters of their environments but I never saw the deapth of anguish her children suffered. The difference between living in a mega city is insurmountable. Tears for these children and their long suffering families.

I loved listening to this after actually
reading it. Very powerful book. Excellent narration. Katherine Boo has challenged my world view.