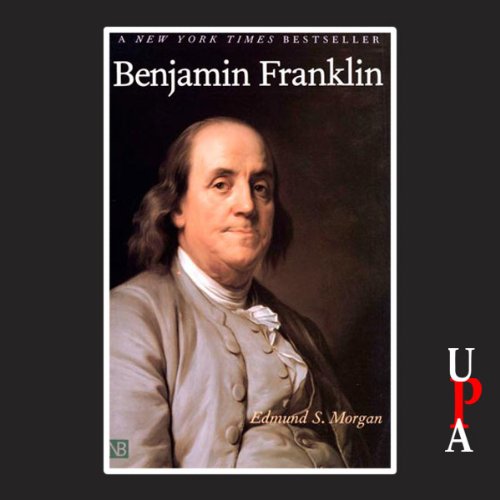 Benjamin Franklin is perhaps the most remarkable figure in American history: the greatest statesman of his age, he played a pivotal role in the formation of the American republic. He was also a pioneering scientist, a best-selling author, the country's first postmaster general, a printer, a bon vivant, a diplomat, a ladies' man, and a moralist - and the most prominent celebrity of the 18th century.

Franklin was, however, a man of vast contradictions, as Edmund Morgan demonstrates in this brilliant biography. A reluctant revolutionary, Franklin had desperately wished to preserve the British Empire, and he mourned the break, even as he led the fight for American independence. Despite his passion for sciences, Franklin viewed his groundbreaking experiments as secondary to his civic duties. And although he helped to draft both the Declaration of Independence and the American Constitution, he had personally hoped that the new American government would take a different shape. Unraveling the enigma of Franklin's character, Morgan shows that he was the rare individual who constantly placed the public interest before his own desires.

Written by one of our greatest historians, Benjamin Franklin offers a provocative portrait of America's most extraordinary patriot. The book is published by Yale University Press.

"Superb... The best short biography of Franklin ever written... [A] concise and beautifully written portrait of an American hero." (Gordon Wood, New York Review of Books)

What listeners say about Benjamin Franklin

I wish the book was read by a more dynamic narrator. The story of Benjamin Franklin is fascinating and rich and Mr. Adamson’s read is a bit flat.

Took a while to get into, but it was worth it.

Would you consider the audio edition of Benjamin Franklin to be better than the print version?

No. The narration was clear and well done though a bit dry and monotone. I fell asleep several times while I was listening. I'm not sure if narrators are aloud to act out parts when a person is actually speaking, but I'd personally enjoy it.

What other book might you compare Benjamin Franklin to and why?

Have already read Isaacson, Brands (currently) and Kidd. I like Brands prose the most but this book had lots of information and points of view not covered in other books, so I liked it very much.

The narration was clear and well done though a bit dry and monotone. I fell asleep several times while I was listening. I'm not sure if narrators are aloud to act out parts when a person is actually speaking, but I'd personally enjoy it.

After reading this book I felt a sense of inspiration to emulate what a virtues human being Ben Franklin was.

What disappointed you about Benjamin Franklin?

What was one of the most memorable moments of Benjamin Franklin?

The early chapters describing his youth provided most insight into his character. The rest of it is just sycophantic adulation.