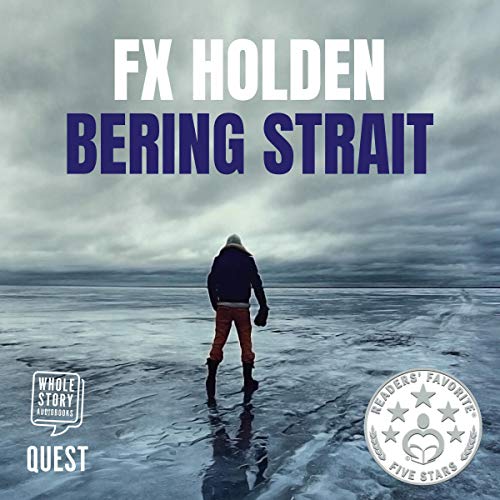 Without warning, Russia starts an operation to seize control of a vital arctic waterway off the Alaska coast. For hot-wired naval aviator Karen 'Bunny' O'Hare, it's about to be a bad day at the office. Not everyone takes impending nuclear Armageddon as calmly as O'Hare.

From an airfield in Russia, Major-General Bondarev is leading a war he doesn't understand against machines instead of men. Under the US embassy in Moscow, Ambassador Devlin McCarthy discovers she can follow her conscience or the orders of her Secretary of State, but not both. And staggering through the rubble of Saint Lawrence Island, teenager Perri Tungyan learns how far his country is willing to go to protect its national interests.

What listeners say about Bering Strait

Why are there not more audiobook from this Author?

Good Overall, but not as good as the last 2

This is a solid book, but it has a few glaring issues. First, the narration is.. well its not horrible but it also is not good. Then there is the simple stupidity of the American reaponse to everything. Your telling me that with enemy troops on american soil, we havent even sent in some Special Forces to observe? That would have happened immediatly. Canada isnt going to deny US operations in their land in an active conflict with Russia, so it would be easy to get sone guys in from accross tbe border to A) rescue those civillians, and B) observe the enemy operations. the fact that this never happens and they keep relying on some kid is just dumb.

Next there is the secret base thing, it was a cool idea but it gets ruined by unbelievability. i get it, you want these 2 ladies to be superheroes. cool, but it takes me out of the story when they are able to do things on their own that would take at least a handful of people. Why not have some volunteers stay behind with them? At least then it becomes more believable, then you can also have an epic gun fight with some Spetznaz at the end that makes a little more sense. Why is a Russian General going into a hostile enemy base with Spetznaz troops to begin with? thats stupid. Why is a US supercarrier completely disabled by a cyber attack? stupid. why is the Russian spetznaz guy on the ground determined to assault an enemy position before he has reinforcements that he could totally call in? stupid.

Also, there is some discontinuity with this book and the last 2, which were far more realistic and overall just better.

actually, i initially had this at 4 stars but im taking it down to 3 the more i think about it. im still going to read the next one, but i have to get it on Kindle instead of audible because only 2 of the 5 book series are actually narrated. wtf is up with that?

i would say overall its an ok story, but its filled with holes that your going to have to work pretty hard to overlook.

This book was very well thought out, and very well written.
Audible definitely needs more from this author.

I couldn't put this one down. Great characters balanced with great tech, juxtaposed in a captivating plot. In the Navy I flew missions during the Cold War in that area of the world. I couldn't put it down :) Bravo Zulu!

The Russians want to take over most of Alaska, but a small island helps block their plans. A good listen but a bit unbelievable for now. It’s still a good listen. And I say this Not Liking female narators.

So we are supposed to believe that Russia could occupy parts of Alaska and the US would pretty much just dither? Or that Russian jets could be shooting down American planes and Canada world refuse to allow US military access to its bases and airspace? And such a huge geopolitical event can only be solved by eight people working on their own without Federal support? Preposterous.

A huge blunder and affront to the author were made by selecting a narrator who enjoys voicing "comedy, children, the elderly, and sci-fi" for a military-action story. Military officers (which this story mostly centers around), whether on battlefields or in F-22 fighter jets, learn to speak with commanding voices that carry appropriate projection, inflection, and "snap". Unfortunately, this narrator's vocal style is slow and appropriate for children and the elderly, but at no point did she convey any of the needed vocal characteristics for the subject matter of this entire audiobook.

Kept my attention throughout the book. Excellent Storyline and finish. Totally believable. I recommend it completely.

Clearly written with well thought out plot lines and interesting subplots and people. I will read more FX books. Recommend this title.

Only criticism is the narrator used no accents for the characters she was portraying and that left something to be desired.

I truly enjoyed this book. I listened to it on a car ride from Utah back to Reno. I got to my house in Reno and kept listening until it was over!

Great story! I don’t usually listen to futuristic type of books, but this one was unique. It seemed as if it was happening today, but it did have some weapon systems that are not available... Yet!

I didn’t think that I would enjoy a female narrator for a war story, but Lyssa Browne did a great job! I highly recommend this book!

Holden in There for Techno-War-Thriller-Goodness!

This is an author channelling Clancy and his Cold War thrillers while giving them a thoroughly modern overhaul with fascinating technology in an intriguing near-future scenario which made quite chilling sense as the motivations for the key actors were revealed. Set in the 2030s it's full of action, contains lots of details about weapons especially missiles and drones and some strong characters, with females taking very powerful leads. I see that another reviewer was not so impressed and I definitely understand where that view is coming from because there is a fair amount of tactical, political and technical description. I certainly wasn't gripped immediately but Holden seems to be a patient author and those characters do come shining through as things develop.

Narration of course is vital for any audiobook, many will feel that this kind of book would be crying out for someone like RC Bray but with so many important characters being women Lyssa Brown makes a decent choice. Clear, eloquent and with good turns of emphasis and slight changes of pace she carries the story well though I chose just to give her a bit of pep and played this at 1.05x speed. However, there are also a broad range of accents required for this story and this isn't a strong point. I'm a normally tolerant reader, as long as I can tell who is talking that's most of what I need either through text or the actor's voices. But if you do like authentic sounding accents you could well have some issues listening to this but with the Audible refund options it's worth giving it a try, you should pick up quickly whether it will be an issue or not. Unfortunately I checked and the sample doesn't contain any examples.

Having gone through it though, I'm a happy customer. An exciting book with plenty of action that marries technical detail with one or two original, to me at least, political ideas. 20 hours of very good listening that completes a full story arc while hinting at more to come, I'll be donning my earphones to enjoy the next instalment.

I love adventure but this book has none!

This was a really bad choice and I am disappointed . Suffered to end chapter 3 and it still sounds like the shipping report all numbers and coordinates. Sorry really boring and impersonal who is it actually about? I give up!