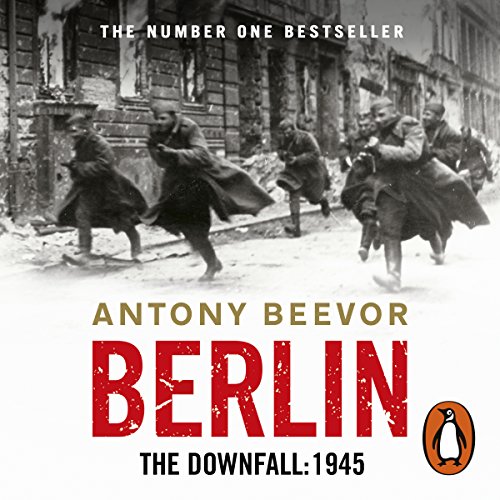 Berlin: The Downfall: 1945 is Antony Beevor's brilliant account of the fall of the Third Reich.

The Red Army had much to avenge when it finally reached the frontiers of the Reich in January 1945. Political instructors rammed home the message of Wehrmacht and SS brutality. The result was the most terrifying example of fire and sword ever known, with tanks crushing refugee columns under their tracks, mass rape, pillage and destruction.

Hundreds of thousands of women and children froze to death or were massacred because Nazi Party chiefs, refusing to face defeat, had forbidden the evacuation of civilians. Over seven million fled westwards from the terror of the Red Army.

Antony Beevor reconstructs the experiences of those millions caught up in the nightmare of the Third Reich's final collapse, telling a terrible story of pride, stupidity, fanaticism, revenge and savagery, but also one of astonishing endurance, self-sacrifice and survival against all odds.

What listeners say about Berlin

If only there could have been more

I was absolutely hooked from start to finish. The detail was, in my opinion, perfectly balanced. Tough listening in places but the reality of war shouldn't be avoided. Particularly poignant listening, as I now live in the former East Berlin and work within 5 minutes of the Führerbunker.

It's on par with the other books written by Antony Beevor, but this one seems to emphasise the civilian blight of germans once the Soviet Union crossed the reich's borders.

Really full of small anecdotes that make the war feel more &quot;human&quot; instead of the book being just a chronological catalogue of who did what, when and why.

An easy listen, I would recommend for any WWII enthusiast. Some horrific images portrayed throughout.

For those with a sensitive disposition towards the brutal realities of war, this isn't a book for you. It covers some very controversial topics that history should not forget, but in a gritty way that comes across harsher than fiction. Very good book all together - non biased and very relevent to those interested.

Harrowing stuff. An eye opener on the suffering of the German civilians.
4 stars because I felt a bit overwhelmed by the military and geographic detail. That problem probably doesn't arise in the printed version with it maps.

The speed and strength of the narration greatly adds to the sense of an unfolding catastrophe . Compelling book..

Journey to self destruction.

Very well researched and narrated. found the detail fascinating and description of suffering at times hard to hear. The futility of the destruction wrought on Germany is almost beyond belief.

Many years ago and decided to revisit it, still as good as I remember, so would recommend

Brilliant insight into the battle of Berlin, fully recommend this to anyone interested in the subject

Macabre, disturbing while listening in Berlin but incredibly gripping.
The reading is very well performed.

This well researched book is full of horrendous detail. It is very well read. A must if interested in WWII.

very comprehensive and terribly vivid. narrated really well. Would recommend highly if u like social and war history

Superbly written and the narration does it justice. Graphic detail presents the true horror of war but provide such an interesting insight into the downfall or Hitler and the Reich. Excellent book

excellnt story i highly reccomend this story to al

excellnt story i highly reccomend this story to all. do.yourself a favour and get in to this