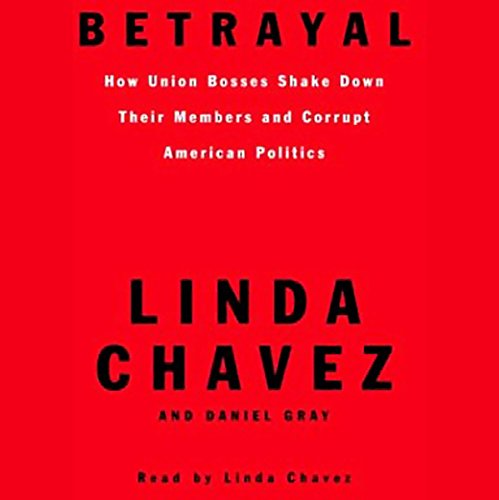 Committed to a far-left political agenda, and to enhancing their own power, union bosses funnel at least half a billion dollars into Democratic coffers every year. And they do it, illegally, by using dues money that workers are forced to pay as a condition of their employment, dues that each year bring the unions $17 billion, all of it tax-free.

What do labor bosses get in return? The power to call the shots in Democratic campaigns and on party policy, extraordinary influence at all levels of government, billions of dollars in taxpayer-funded federal grants, and special legal privileges that leave them free to act as they please, no matter the consequences for the American people. The cycle of corruption is seemingly endless.

Chavez and Gray name names, exposing the many politicians who are in Big Labor's pocket, including the leading lights of the Democratic Party.

All of us foot the bill for this corrupt system. Now it's up to us to do something about it.

Fascinating -- but get the abridged version

This book is a fascinating look at corruption in labor unions, and the way that labor's leadership is able to use mandatory union dues to maintain power and exert political influence. Some of the examples given are downright terrifying (e.g. the terrorist acts done in the name of labor solidarity during the New York Daily News strike). The fact that labor is willing to do these things is bad enough... but then the media and politicians "look the other way" in an effort to "not take sides". Scary stuff.

The only complaint is that I wish the book were less partisan in its approach. Of course, any book criticising labor will be critical of the Democrats who support labor. But at times it goes overboard with its Democrat-bashing. The material works just fine on its own, and it would be a more powerful statement if it were less partisan.

One other note: the unabridged version is extremely repetitive at times. Some points are repeated over and over again throughout the book. It's almost as if the book is a loose collection of essays with overlapping themes. It could definitely use a comprehensive edit. I'd get the abridged version over this one.