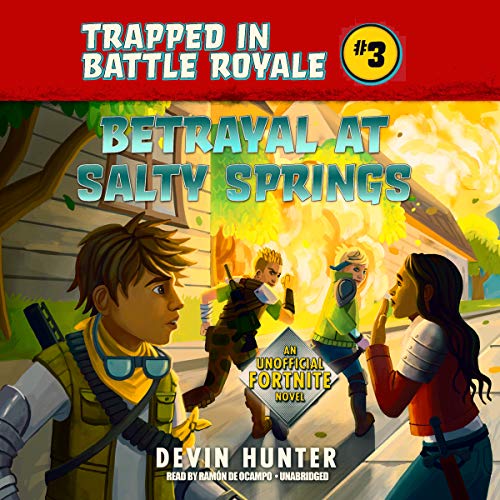 Grey has improved a ton with the help of his friends, and he's closing in on the top tier of players. But then his closest friend announces that he's been asked to join a new squad on the top tier and leaves them in hopes of making the top five with his new squad.

Grey is devastated, and his team struggles. He falls back several ranks and begins to wonder if it's even possible to escape the game this season. Some players have been there for many seasons...some aren't even trying to leave because they like it so much. Maybe he should just accept it as his life.

A former rival tells him to snap out of it - he's too good to slide back so far. They end up in a squad and do well enough to scale the ranks again. Grey has a chance to screw over his old ally/friend by taking his place on the Top Tier team, but will he?

What listeners say about Betrayal at Salty Springs: An Unofficial Fortnite Adventure Novel

I love this book, this is the second time I have read it and every time I read it I keep coming back to it, where is the sec

This book is awesome because I like playing Fortnite and it is my favorite game, also it makes me feel like family is very important.

Good book would listen to again

Can't wait to listen to the next book loved this would recommend it. Cool Characters I like Grey the main character he is really cool

Bad made my mommy breke my pone