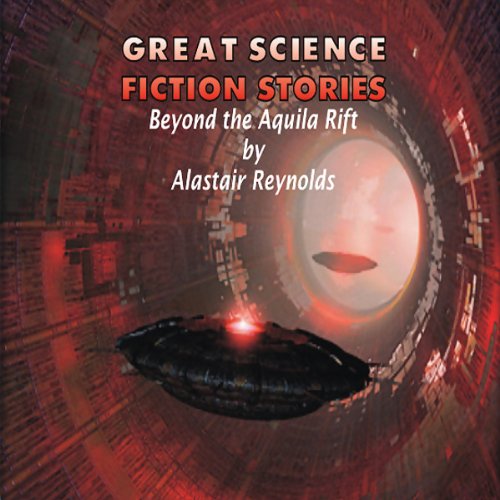 Beyond the Aquila Rift: It's shorthand for the trip no one ever hopes to make by accident. The one that will screw up the rest of your life, the one that creates the ghosts you see haunting the shadows of company bars across the whole Bubble. Men and women ripped out of time, cut adrift from families and lovers by an accident of an alien technology we use but rarely comprehend.
©2005 Alastair Reynolds (P)2008 AudioText

What listeners say about Beyond the Aquila Rift

I love the universes that Alastair Reynolds creates, and the stories he weaves in them so I was a little disappointed to see how short this story was (it's only an hour long, take note of the price as it's probably worth purchasing it rather than wasting a credit). Length complaints aside, this is a great story and I really enjoyed it. It vaguely echoes some of his other work but it's definitely new and interesting material, telling the story of some off-track astronauts, shuttling between brief vignettes of "now" and "not too long ago" with a nice psychological twist at the end to keep you wondering for a while.

That said, this audio version of it verges on terrible. I don't know if it's because I now unconsciously relate John Lee with Alistair Reynolds but the narrator (Tom Dheere) just didn't work for me. He sounded like he'd been challenged to read through the story as fast as possible and, to draw a traffic analogy, treated sentence ending punctuation much like a speedhump or chicane rather than stop signs or red lights. Additionally, the vignettes are separated by 15 seconds of music. WHY??? It's an audio version of a book, it doesn't need extra music or sounds effects, it just needs someone to read the words! If it's imperative to draw a distinction between separate passages then leave 2 seconds of silence to indicate it or something, don't start introducing lengthy chunks of foreign material where the author never intended them to be!

The story was good, and what I'd expect from this author. The narrator, however, seemed to be rushing through it as fast as he could, sounding almost breathless at points, which seemed generally inappropriate for the story.

the narrator is in a rush to finish.

extremely low quality narration. very frustrating with out color, as he was trying to finish the story. this listening was stressful.

just as good as the episode for love death and robots. was so much fun to read

the story was great but I thought the performance was a little to fast paced.

Kind of a weird book

I have to say, until the last 10 minutes of the book, it wasn't very interesting.

this book was really well read, the narrator was good and the story was phenomenal.

Grate story. The narrator read a bit too fast for my liking, but overall a good book. this needs a sequel

I forgive you Alastair Reynolds

i wanted to like this. but the experimenting with this form of narrative didn't work for more.

This is an acceptable re-telling of an ages-old tale of woe. The SF is a backdrop, which is a good thing; but the story itself was far easier than most of Reynolds's other work

The reading was also OK. I might have given it a 4 if not for the musical breaks between sections.

I bought this audiobook on Amazon, linking through from the paperback version of the “Beyond the Aquila Rift” short story collection. However, even though this has the same title as that collection, it is just a single story! I’m contacting Amazon to ask for a refund. Ripoff.

I downloaded this book after having watched the Love, Death and Robots episode inspired by it. It's an excellent story, though, part of me wishes that I'd heard it before watching the episode, as is always the case.

One slight problem I had with this audiobook was the reading pace. There's a lot to take in in a pretty small amount of time and I think the author read too quickly and it didn't really give you a chance to dwell on what was happening. My solution to this was to change it to 80% speed, though, and that seemed to do the trick.

I listened to this whilst on a walk and it firmly held my attention throughout. Highly recommend particularly if you've *not* seen the Love, Death and Robots episode yet.

The orator does NOT understand pacing.

I decided to give this book a go as I recently watched the Love Death and Robots episode that is based on this short story. The story itself is in my opinion a tad less interesting than the animation, however my main annoyance stems from Tom Dheere. He reads this story like he had too much coffee and decided to speed run it. It's honestly quite jarring. A secondary complaint would be that he seems to struggle to clearly change voices for different characters. Often times I couldn't tell who was actually talking. All told, I wouldn't recommend this audiobook to people, I would instead recommend just watching the LD&R episode.

Good story but a rushed narration

Narrator sounded like he was late for a lunch. Great story though! Worth the price of admission.