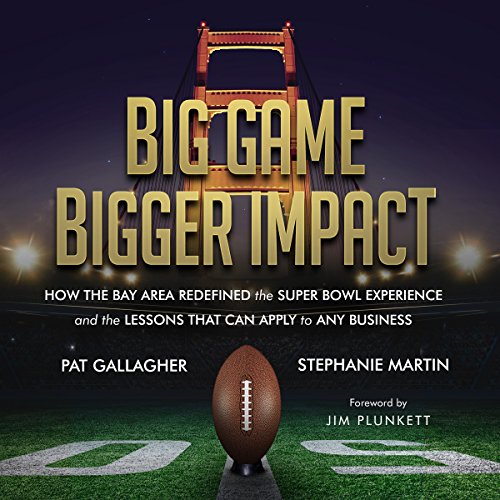 How the Bay Area Redefined the Super Bowl Experience and the Lessons That Can Apply to Any Business
Written by: Stephanie Martin, Pat Gallagher
Narrated by: Pat Gallagher
Length: 5 hrs and 5 mins
Categories: Business & Money, Leadership

In 2014, a small team of San Francisco Bay Area residents was assembled to work on what would be the biggest Super Bowl the NFL had ever staged - the milestone Super Bowl 50. The first Super Bowl in the Bay Area in more than 30 years, there was no municipal purse to tap, nor any roadmap to follow: this group had to develop its own playbook.

In Big Game Bigger Impact authors Pat Gallagher and Stephanie Martin chronicle how the members of the San Francisco Bay Area Super Bowl 50 Host Committee came together with the region to not only host a Super Bowl, but also redefine the experience in the process. After the final whistle was blown, Super Bowl 50 was the most giving, most shared and most participatory Big Game to date. Former Host Committee colleagues Gallagher and Martin provide an insider's look into lessons learned during the Host Committee's two-year run-up - lessons that could benefit any business - and how their culture helped to achieve a record-setting Super Bowl, both on and off the field.

"I know from experience greatness can be achieved through hard work, determination and coming together as a team, and that's how the Bay Area community approached Super Bowl 50. Pat Gallagher and Stephanie Martin's book recounts the amazing story of how it all happened, and at the same time offers valuable insight that can help any company build a championship team. You don't have to love football to love this book." (Jerry Rice, Pro Football Hall of Famer and 3-Time Super Bowl Champion)