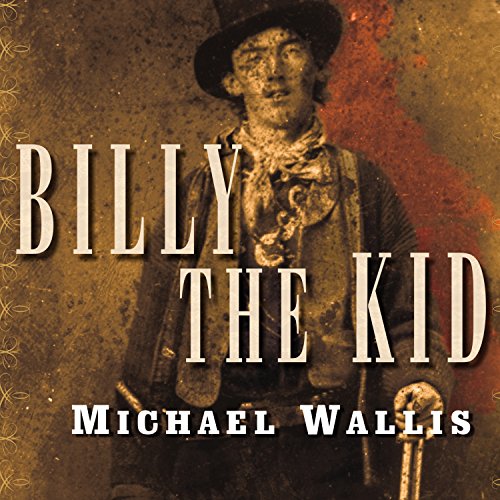 From the best-selling author of Route 66 comes this long-awaited biography of one of America's most legendary folk heroes.

Award-winning historian Michael Wallis has spent several years re-creating the rich, anecdotal saga of Billy the Kid (1859-1881), a deeply mythologized young man who became a legend in his own time and yet remains an enigma to this day. With the Gilded Age in full swing and the Industrial Revolution reshaping the American landscape, "the Kid", who was gunned down by Sheriff Pat Garrett in the New Mexico Territory at the age of 21, became a new breed of celebrity outlaw. He arose amid the mystery and myth of the swiftly vanishing frontier and, sensationalized beyond recognition by the tabloids and dime-store romances of the day, emerged as one of the most enduring icons of the American West: not to mention one of Hollywood's most misrepresented characters.

This new biography separates myth from reality and presents an unforgettable portrait of this brief and violent life.

"Wallis writes clean prose, occasionally enlivened by a particularly lovely turn of phrase....[C]ountless books have been written about the infamous outlaw, and this is surely one of the best." ( Publishers Weekly)

What listeners say about Billy the Kid

An exceptional writer, a larger than life historical subject, and a capable narrator should have all of the ingredients for a great audiobook. But somehow the work just did not work for me. It seemed to lack the focus and detail that could keep my interest.

narrative was good. interesting tale of Billy the kid. I would recommend this book. yeah

One of the more believable books on Billy

So many boots on Billy on nothing more than fantasy. This one stuck with the known facts. Loved It...

While I appreciate the artists rendition of Billy the Kids life, it is not what I thought it was going to be. This book was very hard to follow listening to it. I think this is more of a book that I'd have to read in person than to listen to it as I could never keep track of where it was going as it often dove off into stories of other people. You can tell this writer is very passionate on ensuring, fact and fiction, rumors and hear say and all such were very clear and that he did a great deal of research but I felt as if he just used stories of people that Billy knew to fill voids and prolong the length of the book. Which isn't an overall bad thing but I regret spending a credit on this regardless.

A lot of filler

Although I like the way the author was able to make me see the kid as a kid, I still feel this book had a lot of filler and useless information. The facts that were told, were different from how I once believed, which makes me think no one really knows anything about Billy the Kid. I'm going to listen to it again before I make my final judgment but right now it's just this author's version of a story told a thousand times.

This collects all the info known about the kid, even comparing conflicting stories. It also includes a history of the people and the places surrounding The Kid to give you more detail into the tumultuous environment he grew up in. The narrator does a great job of switching voicing for quotes, to give life to the people interviewed.

I little too much back story on stuff that doesn't really have to do with Billy the kid. Kind of seemed like filler, but helped setup the origin of the wild west,prior to Billy's arrival.

this book held our interest. great factual story. we learned a lot of very interesting facts about the time that we would not have known. highly recommend

This book is well written and historically based. i enjoyed it very much. Told about the 1800s new Mexico revolving around an interesting character.

The narrator has a friendly, easygoing voice, and delivers the account in an interesting, listenable manner. We all know the story, if only from films or folk songs. Here the author tries to distinguish between fact and fiction, but bearing in mind the circumstances surrounding Billy's life, and the unverifiable integrity of the accounts available, by the end we are still none the wiser. We may be swayed by compelling cross-referencing, and impressed by certain "reliable" detail, but we will never really know the truth. If Billy the Kid fascinates you, then you will enjoy trying to decide what is, and what is not, likely to be true.

So much filler. The performance is good but 80% of this book has little if anything to do with Billy the Kid.

Too much guess work

Goes into too much detail which is not possible have been know. Therefore casts doubt on what is factual and what is speculation.

I’ve read a number of books on the kid and this is as good an insight as any I’ve enjoyed. Detailed, honest and thorough. Good book!