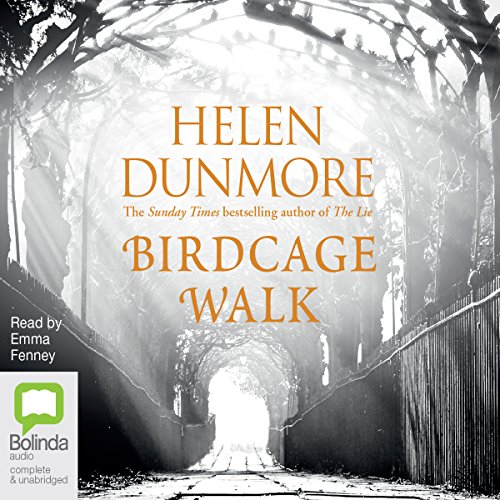 It is 1792 and Europe is seized by political turmoil and violence. Lizzie Fawkes has grown up in radical circles where each step of the French Revolution is followed with eager idealism. But she has recently married John Diner Tredevant, a property developer who is heavily invested in Bristol's housing boom, and he has everything to lose from social upheaval and the prospect of war. Soon his plans for a magnificent terrace built above the 200-foot drop of the gorge come under threat. Diner believes that Lizzie's independent, questioning spirit must be coerced and subdued. She belongs to him: law and custom confirm it, and she must live as he wants. In a tense drama of public and private violence, resistance and terror, Diner's passion for Lizzie darkens until she finds herself dangerously alone.

"Hers are expert hands at turning history into gripping fiction." ( The Times)
"Helen Dunmore...is a poet as well as a novelist, who is celebrated for her delicate language and acute observations." ( Sunday Times)

What listeners say about Birdcage Walk

Oh my gosh...I loved this so much! Beautifully written and narrated. I will definitely be either listening or reading more from this author.

Enjoyed this book very much. Set during an interesting time historically, I learned a lot and it really made me think about how people's achievements etc. can disappear after they die... this became particularly poignant after I'd finished the book and discovered that the author died recently and was seriously ill while writing the book (even though she didn't know at the time).
I really warmed to the characters and was worried sick throughout that something terrible would happen to Lizzie.. The depiction of what nowadays would probably have been considered gaslightling was very well done and I found it quite menacing.
The performance overall was good, however there were moments where I found the reading slightly grating - usually when reading the name 'Lizzie' in a slightly over-exasperated tone. Could just be me though!
A recommended read for sure.

Compelling glimpse of a turbulent time

I began listening to this story not long after the sad news of the author's death. This I think did play a part in my listening experience and reflection on the shortness and unpredictability of life. Another reading of this novel might be as a thriller, at times it was unputdownable or unturnoffable would be more exact. Another reading is a reimagining of an historical time where changes impacted in different ways on people's lives both here and in France. In this reading I would compare Helen Dunmore to Hillary Mantel as having the ability to get inside the skin of her characters and help us understand that time better, to feel it. Finally Helen Dunmore is a poet and sometimes her choice of phrase or image catches the breathe. I loved this book. The narrator did an excellent job because I wasn't aware of her, only the words.

I enjoyed Helen Dunmore's last novel very much. As with all her work, it's well crafted and a great storyline. However, I found the narrator irritating. She has a way of gabbling her words, and then pausing... so you are dragged along in a stop start manner. She also has the modern pronunciation of saying 'diddunt' (for didn't) as a child would pronounce the word. Yes I'm being picky, but it spoiled it for me, I should have bought the paperback.

'Her words remain our inheritance'

These are the words on a gravestone in Birdcage Walk, the hauntingly beautiful partially ruined cemetery in Bristol which triggers the story of the fictional Lizzie Fawkes that follows.

This brilliant historical novel opens in 1789 with an un-named man burying a body in woodland on the wild side of the Avon Gorge in Clifton, Bristol - a scene of both menace and beauty - and it is not until the very end of the book that we have the last piece of the jig-saw which makes full sense of it. Lizzie Fawkes, the daughter of the woman in the Birdcage Walk cemetery, has married the building speculator John Diner Tredevant, a dynamic visionary with great plans for building prestigious houses above the Avon gorge. Lizzie's adored mother Julia is a sort of Mary Wollstonecraft radical author married to her second husband Augustus, but her life changes when she becomes pregnant twenty years after giving birth to Lizzie. The birth scene is so detailed and visual that it makes for difficult listening - enough to say that Lizzie is left utterly bereft.

The French Revolution is the vividly created historical background with accounts of the bliss-to-be-alive days longed for by Lizzie's mother and friends developing as time passes into the fearful Terror and the guillotine. The news from the unfolding catastrophe in France parallels Lizzie's life falling apart as she looks after her newborn baby brother, and comes to fear (with good reason) her increasingly controlling and menacing husband who is threatened with bankruptcy as his fabulous plans for building elegant houses on borrowed money disintegrate.

To give more of the story would spoil the tense plot and the final denouement, but there are some outstandingly intense dramatic scenes, such as Julia's confinement and a desperate boat crossing of the turbulent Avon river. But it's not just these scenes: it is the mass of unobtrusive contemporary detail which makes this thoroughly convincing and tactile historical reality, and also the delicacy of the language. (Helen Dunmore is also a poet and her ability to choose words which sing is evident throughout.)

The author's afterword which ends the recording is extremely moving and gives an extra dimension to the words on the gravestone. Emma Fenney makes a good job of presenting this complex work.

It is one to look out for and treasure. I loved it.

I enjoyed it after struggling with the very rapid (and grating) start. Thankfully it slowed a little which allowed me to a absorb and enjoy the great writing.

listen to the narrator first

the narrator's voice was awful when in character, incredibly distracting. story is ok but without great surprise or depth.

A very detailed gripping story, that made the seventeen hundreds come vividly to life. I also loved Helen's journey finding and creating the characters and times.

Glad when it was over.

I have read and enjoyed Helen Dunmore before but this one felt like 3 books in 1 which made for a confusing storyline. Also didn’t much care for the main characters, all of whom, apart from Liz, the narrator made to sound stupid
or ridiculously overbearing and what’s with the speeding up at the end of each sentence? It’s almost stressful to listen to. Sorry but I was relieved when I finished it. Obviously one better to have read in book form.

Just couldn't put this book down, clever and interesting plot with real history. It was beautifully read and I could not have enjoyed it more. Thank you.

Not as good as other books by the author

Although I don’t think this book is as good as the author’s previous books, Siege or Betrayal, it is worth listening to. My misgivings are over the separate themes that run through the narrative and that don’t satisfactorily gel together. We learn of the controlling and abusive marriage between Lizzie Fawkes and her husband, John Diner, Tredevant a Bristol building speculator with a dark past; of Lizzie’s radical, feminist mother and the latter’s second marriage to a English supporter of the French revolution. Simmering in the background is the ever increasing violence of the French revolution and the execution of the King. It’s a book full of descriptions and side issues that slows the narrative. I had heard a much abridged version of the book on the BBC’s Book at Bedtime which, by trimming much of the details, ended up with a more coherent and pacy story.

The narrator is very good.

A disappointing, long winded start but storyline improves 5 or 6 hours from the end.