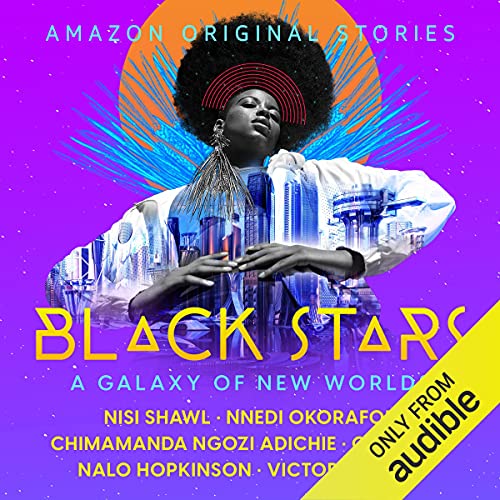 The sky is not the limit. From an alley in New York to an interstellar wormhole, the path to the future looks different for everyone. These cosmic short stories from some of today’s most influential Black authors reveal a universe of possibilities.

African-descended USians are finally obtaining reparations - underwater. Take a deep breath and enjoy this politically sharp short story that dives into fantastic new territory. Plunge into the action of a visionary future by the award-winning author of Everfair, with narration by LeVar Burton (Star Trek: The Next Generation).

The Black Pages by Nnedi Okorafor

By fate and fire, a being four millennia old is reborn in Mali in a short story of contemporary African life and ancient secrets by the Hugo and Nebula Award-winning author of the Binti trilogy.

The Visit by Chimamanda Ngozi Adichie

As a powerful matriarchy reshapes the world, two men - old friends - confront the past and future in a bracing speculative short story by Chimamanda Ngozi Adichie, author of Americanah.

These Alien Skies by C.T. Rwizi

Accidents happen in the strange realms of the African Union system. One of them sends two humans to the far side of a star gate in a thrilling short story of hope, survival, and new dimensions.

Clap Back by Nalo Hopkinson

A past struggle for racial equity could achieve a profound future victory in this audacious short story about technology, hoodoo, and hope by a Nebula Award-winning author.

We Travel the Spaceways by Victor LaValle

Otherworldly interference in real-world New York City? Or delusions? For the answer, follow two loving strangers in an astonishing short story of faith and hope by a World Fantasy Award winner.

“An outstanding assembly of authors is matched by a stellar set of narrators, including both well-versed veterans and fresh talents. Of particular note are LeVar Burton's jovially menacing turn in a story about underwater reparations and the cost of freedom, Naomi Ackie as a djinn-like creature reemerging in a time of conflict, and Brian Tyree Henry's vocal range as an unhoused man and the collection of soda cans that might be telling him the secrets of the universe.”–AudioFile Magazine

What listeners say about Black Stars

I was fortunate to stumble across this collection of stories, I’m not even aware what possessed me to check them out but I am glad I did. I enjoy any author that can help broaden my perspective especially in a cultural sense. I don’t know that this kind of writing would have been so readily available even 20 years ago and that’s a shame but I’m grateful it is available now. I encourage anyone with an open mind or someone willing to open their mind to different ways of thinking and alternative perspectives to the traditional to listen to these stories and appreciate them for the art that they are.

Amazing! full books from each please?!

I loved every one of these stories, but Black Pages and the last one set in NYC were my favorite. I cried so many times, laughed as well, the intrigue kept me listening late into multiple nights! Excellent performances, delicious stories, given the opportunity I'd jump on full books from each!!

I want more of this format and from authors like these!

how they just end like that, though, aliens in the sky or the alien story honey, that one had me in tears from start to finish, I loved every piece of it and I wanted to know what happened when they got back to humanity, I need more please an hour was not enough, it was too many cliffhangers, I need to know what was going on. It was to are 3 stories that was just really good and the one where she was contemplating whether or not to format everybody together was number one in my book I'm trying not to give away spoilers, so that's as much as I will say, but these stories was good as hell.

Each story begins like a walk in the park and ends atop Mount Everest.
Poetry, every word.

Every story in the collection is well written.

The merman story stated out well, but fell into the post apocalyptic nightmare category. I don't read that genre.

The other stories were engaging. And creative. And left me wanting to know more about the characters.

my heart is full with these works. I have joy, and thoughts, and tears, and hope for the world's these characters live in and the one we live in. hope that we can shape each other for the better. love love love!

Transported to the Stars

The stories in this recording were captivating. I was transported to the stars, to new worlds and behind the curtains veiling parts of this world. These stories left me wanting more. I have already downloaded my next book by one of these great authors.

Through our speculative pasts, present, and future. I hope that more will come pretty soon.