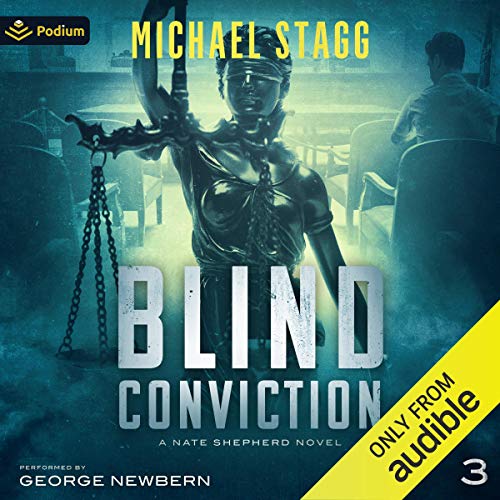 A vicious attack leaves a woman near death. The evidence points to one man. Only Nate Shepherd stands in the way of a conviction.

Attorney Nate Shepherd doesn’t want to take on an attempted murder case. But when people he trusts ask him to get involved, Nate agrees to represent the hard-working farmer who’s been accused of trying to kill his brother’s fiancée.

By the time Nate steps in, law enforcement has already gathered a mass of evidence to bury his client. With the help of a diligent associate, a dogged investigator, and a dangerous bail bondsman, Nate unearths a web of money and motives that only raises more questions. But while Nate digs deeper to prove his client’s innocence, a zealous prosecutor steamrolls on toward a conviction, relentlessly building a case to put Nate’s client away for life.

As Nate fights for his client, a family fractures, friends are endangered, and a farm-tough victim struggles to recover. And all the while, a hard truth gnaws at Nate: If his client didn’t do it, then who did?

What listeners say about Blind Conviction

As a lawyer for 40 years, I've listened to just about all of the legal thrillers on Audible, and can say that Mr. Stagg's are among the best, and keep getting better. The writing is excellent, the plots at least plausible, and the courtroom drama as realistic as anything written by the well-known authors. The protagonist and his hometown are appealing, and the narration stupendous. Highly recommended.

I am a big fan of Michael Stagg,and this book is another book that will surprise you . I found the narrator to be pleasant and expressive.

I enjoyed the series

The first book of the series was Lethal Defense which was a free audible read. I enjoyed that one so much it prompted me to buy the other three in the series. The remaining three were still pretty good but I had to suspend belief that the prosecution could charge a suspect based on such lame evidence. Still, I like all the recurring characters and the closeness of Nates family. Nate's use of the word "troll" made me laugh.

New discovery for me

one thing I enjoy about this author is that he doesn't over explain. He respects the reader/listener enough to let you figure out some things on your own. That was especially true for the previous book but also for certain elements here too.

That said, I was definitely a few steps ahead of the story each time. This was my 3rd in the series and I hope to follow them all in order. Another way to put it is, you don't have to give it your full attention, you can drive hike etc and not really miss anything.

A small gripe: Everyone speaks alike. This especially true for the courtroom scenes when every witness almost always responds to questions with "I did." "I would, " etc regardless of their education levels or when a simple"yes" would sound more natural. He can be excellent at bringing out a character's personality thru dialog but then he goes all lazy on the question /answer sequences.

Nate Shepherd is a likable lawyer

Having listened to all three Nate Shepherd novels, I'm looking forward to the fourth due out this November 2022. No doubt the odds will be well stacked against this guy and his one lawyer small town firm. But he and a few of his helpers manage to find a way to provide a proper defense for their clients. Newbern the narrator has the perfect voice for this laid back lawyer. It's moderate and gentle...makes for a likable listen. Cheers, Ken

Great narration. Great story. Listen to all three of his books. Can’t wait for the next.

Loved this trilogy. Sorry to see it end. Narrator was perfectly cast. Characters were developed so you cared about each one.

I loved this series by Michael Stagg! I listened to them on audible and they kept me captivated from start to finish. As a farmer, I could relate to the third book, Blind Conviction. The reader was excellent and really enjoyable to listen to. The stories make you feel like Nate Shepherd is someone you might know and really like and respect. He takes cases that seem to be impossible to win and the stories take on twists and turns that are quite unexpected. Definitely worth a read or listen, whichever you prefer. I will look for his books in the future!

Book three in the "Nate Shepherd Legal Thriller" series by author Michael Stagg was entertaining, enjoyable, and exciting. The series continues to be one of my favorites. The characters are solid and unique. George Newbern's narration was spot-on.

I have listened to the first three books in the Nate Shepard series. I like the plots. I always try to guess who is guilty and the author always has something up his sleeves. The characters are great. Mostly nice people who I am very fond of now I feel like I’m transported in every story. No bad language which I really appreciate No sex scenes. Michael Stagg is talented George Newbern is a good solid narrator and I never want the books to end. So off to the next offering from Mr Stagg!

Best of the first three

I've enjoyed the first three Nate books (will be starting four soon) and found this the most likeable of what I've heard so far. Main characters are developing nicely and the third act revelation was a nice touch that lead to a satisfactory ending. Voice performance was excellent again and am looking forward to book four.

Ok I have in and downloaded the third book even though I said I wouldn’t! It is such easy listening, and the narrator is excellent. I think this story was better, it had a satisfactory twist!