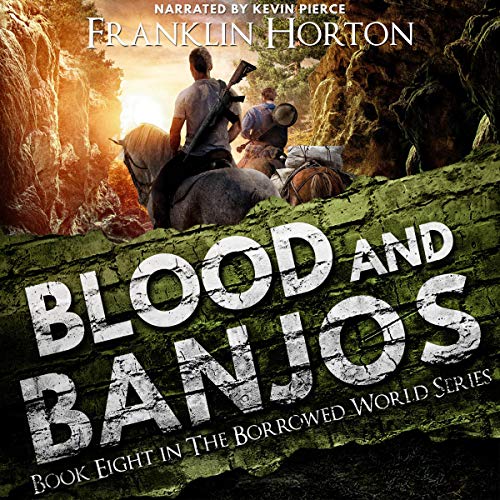 In this eighth installment in the best-selling Borrowed World series, Jim Powell is convinced that his presence in the valley is putting his friends and family in danger. Hoping to buy them some time, he increases the security at his home, then sets off on a trip to allow the situation in his community to cool off. As much as he hates the idea, he also intends to scout out a location to fall back to if his people get driven from their homes.

Frustrated by the constant tension and violence, his best friend, Lloyd, joins him. Though Jim initially welcomes the company, Lloyd spends his day writing folk ballads about his friend’s body count and bad decisions.

Both men struggle with how best to confront their changing world. Both are desperate for a solution that will give them peace. Jim ultimately wants control of his surroundings, but doesn’t want the responsibility. Lloyd wants to lay down his gun and return to the life of a performing musician. In his own way, each man will find that some truths are inescapable. While their collapsed world still allows them free will, there will be no peace, and there is no escape from the violence.

What listeners say about Blood And Banjos

Did not meet my expectations

This is one of my all time favorite series, but sadly this book did not deliver like the others have. The series has been a favorite with me because of the villains and the action coming from the conflict arising from the group's struggles.

No action occurred until a third of the way through the story and then very little subsequently. The focus was more on Lloyd, a character we know well from previous books. Problem is, Lloyd was always a filler character who was good in small doses. Making his antics the focus of the story was a deal breaker for me.

One very interesting thing happened in the story setting up an interesting next book. I won't reveal spoiler details.

This book could have been the first quarter of a more involved story with deeper plot and more action.

not what i was expecting but good listen regardles

Just when you thought it was over.

I was certain this series was done. Then this pops out an blows me away. Seriously glad the story is continuing. Love the little nod to the Mad Mick.

Not my favorite in the series

Loved the other books in the series but this one was a little slow and dragged on at times. Im still looking forward to the next one.

Not his best work.

he did an awesome job with this book.

I loved the personal dilemmas that each character went through and how he solved them.

Your books have been amazing and Kevin makes this audible experience amazing. Thank you for your books!

A brilliant addition to the story

I really loved this book!! Although I have read the whole series this book could stand by itself and catches you up nicely.
As always, Kevin Pierce’s performance brings the characters to life.
On point!

Folks Do Some Growing Up

Jim leaves the Valley so others in his group get to step up and do some growing up, taking responsibility to make "hard" decisions. Soooo glad to see Lloyd finally growing up too. I'm the oldest in my family so I often had to make decisions that though keeping others safe, didn't allow me to win popularity contests. My becoming disabled made my readymade critics have to grow up too. Jim gets a necessary breather and we get to meet some fantastic new characters. Kevin Pierce does his regular stellar job. Enjoyed it!

I loved the Mad Mick tie in.. Keep them coming very enjoyable series. Looking forward to what happens next in Joms Valley..