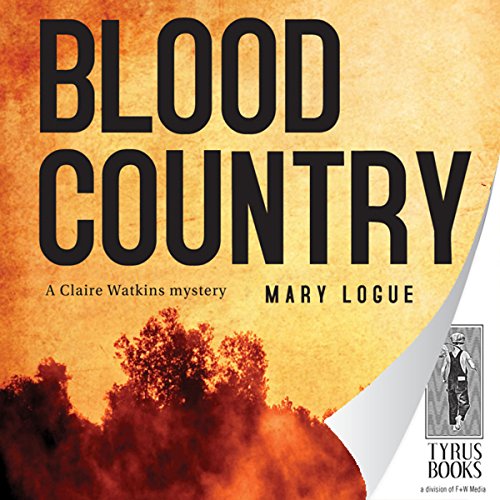 Police officer Clare Watkins moves with her young daughter to Wisconsin to get away from the past and its bad memories. But Clare doesn't know that her 10-year-old daughter Meg not only witnessed the hit-and-run accident that killed her father, she had also seen the man who was driving...and had been seen by him.

Was looking for a new series to follow and came across this one that sounded interesting. I have not read any Mary Logue book before but do like Joyce Bean narration. I was not disappointed in the first book of the series, it sets the scene for the series. Claire Watkins husband is killed in a hit and run in front of her house and the accident was witness by the daughter Meg. Claire resigns her job with the St Paul homicide squad and moves to a small town in Wisconsin to be near her sister and raise her daughter in a safer environment. Needless to say the action begins with the killer coming after Meg and Claire's sister. Claire's neighbor is murdered. Lots of detention work, action, suspense and humor. Time is taken by Logue to build characters which is why I sometime enjoy a series over a stand-alone book. Shall try the next book in the series before I decide to continue the series or not.

This book tells the story of a woman who has relocated with her daughter, following the shooting of her husband, which the child has witnessed. Clare is a deputy now living and working in a smaller county, but her policeman husband's murder still goes unsolved. Her former partner is helping work on that and also hopes for some romance with her.

Meanwhile a second murder has occurred where she now lives. Her gentle neighbor has been killed in his garden. There are some other characters who figure prominently in the book: of course the daughter, but also a concerned friend who raises pheasants, her sister, and relatives of the neighbor who is killed. They are pretty well-developed as characters and play a large role in what ensues. One or two characters are incompletely developed, and left me feeling I did not understand them--or their exact roles--as parts of the book, well enough.

At first I found either the writing or the reading rather off-putting. Hard to keep my attention focused. Then every now and again, some of the writing became unexpectedly good, reading more like an experienced author who handles the material very well. Then it would fade away, and so would my attention. But around the second half of the book, the writing picked up pace, was not so hum-drum, in fact was actually quite excellent in places, and I found myself not wanting to turn it off till the end.

Thus I found it to be an unusual listening experience. From about the midway point on, there was no question in my mind that the story was good, and I was hooked on listening. I don't feel that the narrator added much, if anything; probably detracted to be honest. I gave the story 4 stars because the second half was very engaging. But I would have given fewer to the first half. Felt like the author just couldn't get going in a way that held my attention for a very long while. And then suddenly, it turned very good. At one point I wondered if it had been written by two people. Nevertheless, I recommend it, because knowing that it becomes very engaging, even if not a mystery that would have needed Sherlock Holmes to solve it, will make it easier to get into with interest I think.

Would you recommend Blood Country to your friends? Why or why not?

The story told by Mary Logue in Blood Country is interesting and decently written. There are some technical points that she got wrong, but they were few and far between enough that I could overlook them. The sense of place is strong and the plot twists are not broadcast ahead of time. I would consider reading another book in this series, but not with this narrator.

Would you be willing to try another one of Joyce Bean’s performances?

It seemed to me like the narrator was trying to read a children's novel instead of a mystery novel. The voices of male characters were poorly done and not in keeping with the presentation of the characters in the story. The female characters weren't voiced much better. In places, one of the characters who is supposed to be a 30 year old pharmacist comes off sounding like an adolescent little girl. Often I found myself wondering what character was supposed to be speaking. Joyce Bean may be a good narrator for some works, but this was not one of them.

Decent set up for a series.

This is the beginning of a series. Characters, setting, and basic history are introduced. The move to a new, safe, laid back setting does not provide all that Claire Watkins hoped for. She is quickly drawn into the "mystery" surrounding the demise of a neighbor. She thinks it's murder while many others believe it's a natural death.

The story is somewhat predictable, but it's easy to listen to. I often pick this type of mystery when I am overloaded with adrenaline fueled or psychological thrillers.

What made the experience of listening to Blood Country the most enjoyable?

It's a good story well told. Not great literature, but perfect for my use, listening while I work in my art studio. Kind of a mystery with a touch of romannce. LIkeable characters. It is somewhat easy to guess how the overall mystery might come out, but there were a few unexpected twists along the way.

What was one of the most memorable moments of Blood Country?

The ending was neatly resolved, with no remaining loose ends.

Just a collection of characters that just don't feel real....a bachelor that seems to raise pheasants for a living, and an old man who gets off strangling the birds? and has an estranged son who is a transvestite?? maybe pheasants are common in some parts of the country, but not from my region. All the characters seemed to be childlike in their responses to each other and predicaments.
The story opens post murder, and while the author reminisces about the victim and their relationship (he was her husband) I never really got a strong feeling for him or that she cared that deeply, other than the fact that she is consumed (preoccupied?) with justice. The daughter just feels a little too sweet and predictable, being the plucky, 'knowing", little girl, that we would imagine for this fatherless family. The sister and the relationship with her husband just felt sort of awkward, as if to give the story a more "real" look at the complexities of relationships. The kidnap (and attempted) just seemed to come from a need to create some level of drama, and then eventually create the elements needed to close the story. But maybe all these various random characters needed to be introduced and drawn out to set up the series....the story just felt disjointed, with more work on establishing a collection of different character types with a small plot thrown in to help give them some context.

Might try another, only because I listen as I commute and it is does not take much effort to follow....Claire's actions at the end actually seemed the most real, and I started thinking I might like her in a future book. Just not sure I will try again or not.