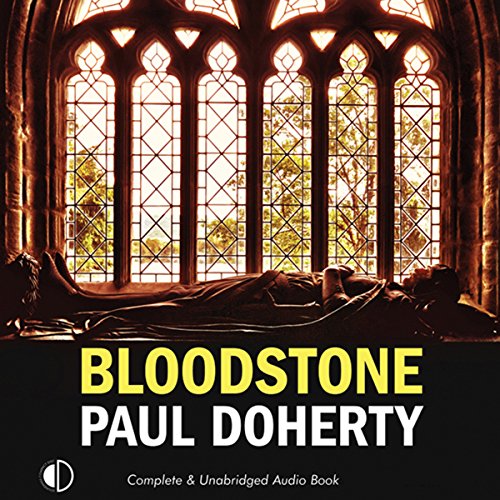 December, 1380. When the corpse of Sir Robert Kilverby is discovered in a locked room, Brother Athelstan accompanies the King’s coronor to investigate. For the late Sir Robert had in his possession a sacred bloodstone which he was planning to donate to the Abbey of St Fulcher-on-Thames.

The bloodstone has disappeared and the Regent is taking an uncomfortably close interest in the case. Athelstan is sceptical of rumours of a curse hanging over Kilverby and his comrades of the Wyvern Company. But then it is discovered that a second old soldier has been slain on the same night. As Athelstan begins to uncover the dark secrets surrounding the Abbey of St Fulcher, the bloodstone curse seems all too real.

What listeners say about Bloodstone

Would you listen to Bloodstone again? Why?

this is a book which needs listening to more than once as it is easy to miss things. to me it seemed quite complex and clever but i found it hard to follow in places so had to rewind a few times so i didnt miss the plot. however i did persevere and was pleased to get more absorbed in it as it progressed. it is a book you really need to listen to every word and the first few chapters are very descriptive, giving a lot of background to the story which emerges after the fist few chapters

What other book might you compare Bloodstone to, and why?

Bloodstone is comparable with Bernard Knights (Crowner Series) and Ellis Peters (Cadfael) with a bit of added mystery. It is not quite as easy to listen to as these but I would still recommend it

The narrator has a lovely story telling voice and sounds quite like John Hurt. I think this made the listening experience well worth while and he has been chosen well for this story

Was so pleased to see a Paul Doherty title that I made the mistake of not listening to the sample. The narrator is unbelievably abysmal and 30 seconds in had me reaching for the stop button! Such a shame but he rendered it un-listenable!!

Book is a but long winded and the narrator average, which means it's taken 3 attempts over last couple of years to get through this book but finally managed and found it reasonably enjoyable.

Paul Doherty at his best!

Once again, Paul Doherty weaves his tale of murder and mystery and keeps us guessing all the way through. Set against the backdrop of medieval London - a terrifying place (!) with historical accuracy that brings it all to life. The narration and characterisations by Terry Wale are just superb.

Love the books but the narrator terrible

I've read every single one of the series and was disappointed with the narration , the narrator doesn't seem to get the characters , the Coroner is a big bold man , with a booming voice but kind heart. Athelstan is a youngish friar but sounds like an old man in fact I couldn't really tell one character from the rest . Which is a bit confusing when listening to an audible book !