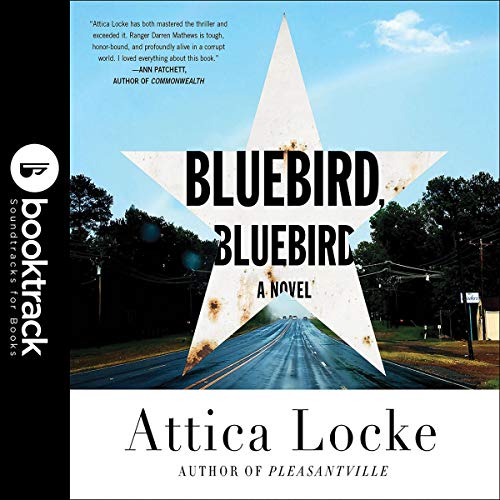 Winner of the 2018 Edgar Award for Best Novel

When it comes to law and order, East Texas plays by its own rules - a fact that Darren Mathews, a black Texas Ranger, knows all too well. Deeply ambivalent about growing up black in the lone star state, he was the first in his family to get as far away from Texas as he could. Until duty called him home.

When his allegiance to his roots puts his job in jeopardy, he travels up Highway 59 to the small town of Lark, where two murders - a black lawyer from Chicago and a local white woman - have stirred up a hornet's nest of resentment. Darren must solve the crimes--and save himself in the process--before Lark's long-simmering racial fault lines erupt. From a writer and producer of the Emmy winning Fox TV show Empire, Bluebird, Bluebird is a rural noir suffused with the unique music, color, and nuance of East Texas.

*Booktrack is an immersive format that pairs traditional audiobook narration to complementary music. The tempo and rhythm of the score are in perfect harmony with the action and characters throughout the audiobook. Gently playing in the background, the music never overpowers or distracts from the narration, so listeners can enjoy every minute. When you purchase this Booktrack edition, you receive the exact narration as the traditional audiobook available, with the addition of music throughout.

"Locke creates a town that breathes blues and beats with familiar warmth between those whose lives have been intertwined for generations." (Las Vegas Weekly)

"Lyrical, elemental, and pulls no punches, exposing racial tensions past and present while a killer blues soundtrack plays perpetually in the background." (Boston Globe)

"[Locke's] mystery novels are top notch...the book's hero, a black Texas Ranger, and his fight for justice make this a page-turner that brings Texas into sharp focus." (Bustle)

What listeners say about Bluebird, Bluebird

I probably won’t recommend it.

The ending was less than satisfying. Also I had a lot of trouble with the names of the character Randii and Wendy Not ones I associate with deep East Texas or the many, many black folk I know from my days in Spring, Texas.