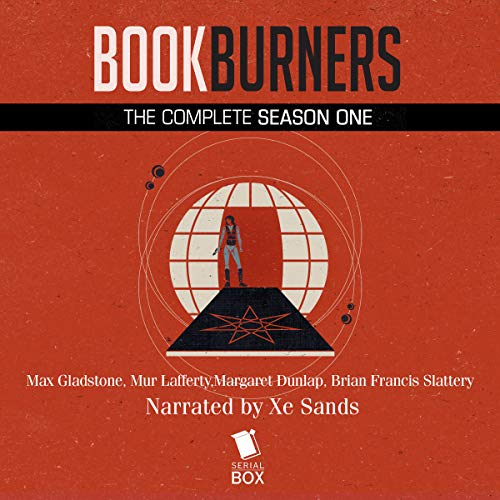 Magic is real, and hungry. It’s trapped in ancient texts and artifacts, and only a few who discover it survive to fight back. Detective Sal Brooks is a survivor. She joins a Vatican-backed black-ops anti-magic squad - Team Three of the Societas Librorum Occultorum - and together they stand between humanity and the magical apocalypse. Some call them the Bookburners. They don’t like the label.

Supernatural meets The Da Vinci Code in a fast-paced, kickass character driven novel chock-full of magic, mystery, and mayhem, written collaboratively by a team of some of the best writers working in fantasy.

Originally presented serially in 16 episodes, this omnibus collects all installments of Bookburners Season One into one edition. This audio edition is narrated by Xe Sands.

"As much fun as binge-watching a full season of a Showtime series." (Publishers Weekly)

"Recommended for those looking for a breezy, entertaining and exciting fantasy read." (Booklist)

What listeners say about Bookburners: The Complete Season 1

On Average, it's decent.

Overall, this isn't bad, but it is very inconsistent. The best episodes come in at around four stars, while the worst can only be given two. Each episode is around an hour long, so even if one doesn't jive with you, it'll be over before you know it.

First, the good: With only five main characters, there is a nice focus throughout. The setup itself is a lot of fun, what with a ragtag group hunting demon-possessed books. Finally, all of the long and/or short storylines move along at a speedy click.

The bad: The first two episodes are a bit hard to follow. There is a long stretch of three or four episodes where I wanted to drop the book because characters were acting so counter to how they were originally set up - it felt like the series had lost its way. And last, a good number of the episode resolutions seemed like they came out of nowhere.

So in conclusion, it's entertaining without many dull moments. However the lack of consistency in quality detracts too much from the final product. I suppose I’d recommend this to fans of Supernatural.

I didn't get get very far. The quavering voice of the narrator was too distracting. The dialog wasn't strong enough to overcome it.