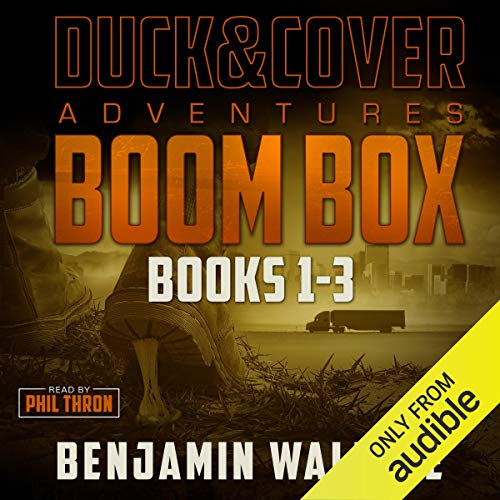 It’s the end of the world as you've never known it.

Join the Librarian as he does his best to make the post-apocalyptic world a better place by protecting the weak, fighting injustice, squaring off against a group of former renaissance fair workers who have established a kingdom in the Rocky Mountains, and so on. Can one man make a difference in the face of such murderous cannibals and super smart bears? Probably not.

An army of savage raiders have their sights set on the peaceful town of New Hope and the people are going to need help. When two nomads offer their assistance, one is hired and the other is sent back into the wasteland. Did they choose the right man for the job?

Knights of the Apocalypse (Book 2)

A price on their heads has driven the Librarian, Erica, and their loyal mastiff west in search of a new beginning. But when their truck breaks down in what was once southern Colorado they are swept into an epic quest at the behest of King Elias, ruler of the Kingdom of the Five Peaks and former turkey leg magnate.

Pursuit of the Apocalypse (Book 3)

A bounty hunter has kidnapped Erica and the Librarian and his dog, Chewy, are desperate to get her back. The chase will take them from the deserts of west Texas to the town of Tolerance and beyond. Be a part of the greatest chase the apocalypse has ever known.

What listeners say about Boom Box

The Post-Apocalypic story we all deserve!!!

Absolutely amazing! The mutants, raiders, bounty hunters, plants, the very wasteland itself is out to claim the Librarian. With a determination to do what's right, Jerry fights a death truck, journeys to rescue a princess, and fights a P.C. saftey zone gone wrong. With a helping paw from Chewie, the Post-Apocalypic Nomadic Warrior gives us a tale like none other. War, humor and slap stick comedy are only the start of how to describe this. I can't wait for what is to follow!

To Whom It May Concern,
This three book series, The Duck and Cover Adventures, is by far the most entertaining and compelling post apocalyptic group of books I have ever listened to. I just downloaded book number four and am going to start it today. I could not recommend this series any more highly, a combination of excellent writing with humor that does not feel inappropriate or out of place, coupled with what I consider perfect narration of the material. The three book combo for one credit is an exceptional value.
With Regards,
Sam Thompson

From the humble beginnings to the storied end. I absolutely cannot wait for the next volume. The intense and detailed action mixes perfectly with the author's ability to twist bits of the real world into a characature of itself.

Really enjoyed this series, I hope there will be more installments in the near future

The absurdity of our modern society so poetically exposed!

I laughed at this Authors depiction of each various outlandish conclave of human habitats in the new post apocalyptic world. He is able to capture exactly the reality of what would actually be left of humanity. My favorite part was his depiction of the “snowflakes” conclave called “Tolerance” on what was a university campus, that was anything but tolerant.
I completely understand that it would be human nature to want to survive with like minded humans. This series takes it one step further and shows how it truly could be; that we’d preferably want to join a conclave society we would fit in with. Well, there’s several to choose from here.
This Author had done a fabulous job building a post apocalyptic world, characters you’d laugh at, would really fear if real, or cheer for. If you have ever been coast to coast across this great nation than I’m sure you’d realize you’d prolly met a few of the less than harmless characters in real life. I know I have.

If you like your apocalypse with a bit of humor...

...then this series is for you. Good action comedies don't come along everyday. They're even harder to find with a post apocalyptic bent.
These books are short however, and maybe a bit steeply priced. As a rule, I wouldn't pay $14 for under 7 hrs of story. But as a bundle it's not so bad. Always something to keep in mind when selecting a series to buy into.

I'm a big Apocalyptic book fan but I went into this series with a fair amount of trepidation, Having heard the series described as "Comedic", I wasn't sure I would enjoy what's usually a serious genre that was written as a comedy. However, within the first few chapters I was hooked. The narration was outstanding and the story was fun, humorous and touching. All the characters were unique and well written for the mind's eye. Now, while it is very humorous, it is also everything a normal Apocalypse you would expect. I highly recommend it.

The only con for me was the fact they were relatively short books.

clever and funny. a total riot action packed and peppered with just the right amount of humor.

Im an immense fan of Phil Thron's dulcet tones but I kept waffling about getting these books. What a fool I am. This series and Benjamin Wallace's style is another perfect fit for Phil's vocal ministrations. What a perfect blend of humour, action and suspense. This value packed bundle would be a deal at three times the price.

I really hope there is more to this, I feel so empty after having finished it. The books are great and I loved that i got all three for one credit! This is a great post apoc series

Got this book because there was a lot of adds for it on Facebook and when it came up with all three books for one credit i thought "Heck. why not." The books were ok but didn't seem to live up to the hype. Good take on the apocalypse.
Will defiantly give it another listen in a while.

More a collection of short stories with absolutely zero character development. Funny in places, but I just didn't care about the people at all.

Each "book" lasts 6 hours, and the boom box contains the first 3 "books". The performance was good, he was clear and concise, but it was a shame.

Yet another book heavily advertised on Facebook, that just wasn't worth it.

first book didn't live up tp the hype. Nothing wrong with it, just had super high expectations. second book was OK. Third book was great. i'll probably listen to the reat of the series.

love this whole series.
would make a good film, but probably Hollywood would fook it up.
As ever,well read

I really enjoyed this book, and thought Phil Thron read it very well (dead-pan). It was funny but also clever, with just the right amount of romance and gore thrown-in. Well worth a credit for three books in one.

a funny, sarcastic look at the End Times

A great series, funny and irreverent, with believably insane characters (imagine if Jeff from accounting went feral, or your dentist decides to lead a biker gang). Very entertaining, can't wait to get Wallace's other works!

I have tried to avoid spoilers but please exercise your discretion when reading ahead. I would also raise a content warning for the second novel.

I bought this on the strength of Dads Vs Zombies, which I found very funny and entertaining, however, having listened to over 15hours, this trilogy is a huge disappointment. I dislike abandoning books but there were just too many flaws for me to enjoy listening to the end and I feel I have listened to enough to be able to give credence to my review. The most significant problem is the appalling writing regarding the main female protagonist - she seems to exist solely in relation to her sex rather than as a three dimensional character. The endless leering at her breasts, sexist slurs, and the two, yes two, attempted rapes in the second book undermined any potential the novels may have. She appears to have little agency of her own and is there merely to look pretty and be rescued. The male protagonist by contrast is virtually invincible and subject to no such degrading treatment. I don't expect every novel to match my world view but there appears to be an underlying bias against anything progressive in these tales that just does not sit well with me.

In the wider view, the characterisation across the board is somewhat shallow; three books in and we still know virtually nothing of the Librarian (which wouldn't matter so much if his personality was more fleshed out rather than just being a 'hero'), the villains are obvious verging on panto, and the plotting is thin. The author can't seem to decide whether the books are to be humorous or serious and as a result they end up working as neither. The first book has potential as a spin on the Mad Max trope but the second and third do not build on this rather they wander off into fantasy territory and become disconnected.

Phil Thron puts in a good performance as you would expect; not his best (so far I think his work on the Dan Deadman books takes that prize), however, a good narrator is not enough to save this trilogy from its problems and as such I am unable to recommend it and will not be purchasing any other work by the author.

must read for preppers

Not your average apocalypse.

I thoroughly enjoyed this trilogy. Was very impressed by it, and excited to hear how the story progressed. I was sad when it ended and I think it is one I will definitely listen to again.
It's a fresh view on a post apocalyptic theme. Amusing. Insightful. Crazy. Some memorable, interesting characters. Some just as memorable towns (particularly the town of Tolerance). The story is chock full of new and old myths, legends and madcap adventures. With the added bonus of including incisive, witty and at times thoughtful insights into the random nature of humanity.
Plus it's brilliantly narrated by the amazing Phil Thron.

This is one of the best appocaliptic story's I've heard with great characters and plot twists.