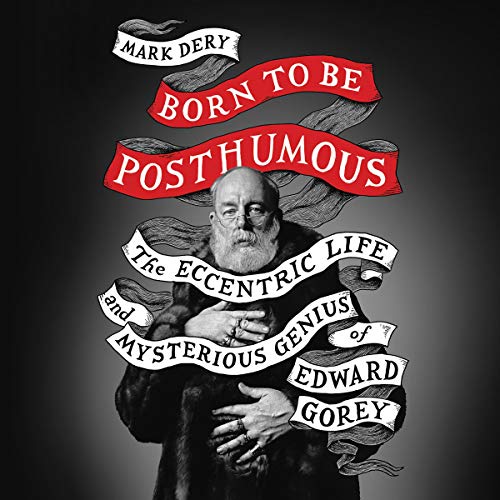 Born to Be Posthumous

The definitive biography of Edward Gorey, the eccentric master of macabre nonsense.

From The Gashlycrumb Tinies to The Doubtful Guest, Edward Gorey's wickedly funny and deliciously sinister little books have influenced our culture in innumerable ways, from the works of Tim Burton and Neil Gaiman to Lemony Snicket. Some even call him the Grandfather of Goth.

But who was this man, who lived with more than 20,000 books and six cats, who roomed with Frank O'Hara at Harvard, and was known - in the late 1940s, no less - to traipse around in full-length fur coats, clanking bracelets, and an Edwardian beard? An eccentric, a gregarious recluse, an enigmatic auteur of whimsically morbid masterpieces, yes - but who was the real Edward Gorey behind the Oscar Wildean pose?

At the same time, he was a deeply complicated and conflicted individual, a man whose art reflected his obsessions with the disquieting and the darkly hilarious.

Based on newly uncovered correspondence and interviews with personalities as diverse as John Ashbery, Donald Hall, Lemony Snicket, Neil Gaiman, and Anna Sui, Born to Be Posthumous draws back the curtain on the eccentric genius and mysterious life of Edward Gorey.

Gorey is amazing but...

But he really didn't need the longest wikipedia in history about him, obsessively repetitive about his sexuality to a creepy degree.
It was a very enjoyable read at first... well written, interesting facts and interviews. Then it drags forever and repeats constantly, as if the author wanted to dig some secret trauma from Gorey's sexuality privacy.

Tedious read to the very end.

lovely book about the reader mispronounced a lot

this was a lovely book but the reader mispronounced many words. for example the word m o r e s and the word t a o. I'm surprised that the producer did not catch this.

I completely enjoyed this book. Narrators performance had just the right crispness and irreverence. What a wonderful experience that we can enjoy Gorey and contextualize him in LGBTQ atheistics and culture and at the same time allow him his fabulous mysteries of identity. Highly recommend both the book and the actor ,

More a disappointing editorial than a biography

Two things seem to sidetrack the author from what should have been a great read. 1) Mr. Dery is pretty obsessed with proving that Gorey was actually gay, in spite of what Gorey said himself on the matter. Sure it's fine to muse for a moment on whether Gorey was actually keeping some aspect of himself private but Dery brings it up over and over and over again. Where was the editor? 2) In an attempt to avenge the gay culture for being mistreated for many years, Mr. Dery wields his own bigotry, venom and stereotyping against various swaths of people including the working and middle class, traditionalists, anti-communists, families, Christians and others in the mainstream culture. All of this is a real bummer in that there's no doubt that Mr. Dery spent a great deal of time researching his subject but in the end has produced a product that just belittles the existence of many of those eager to enjoy it. Wish I could get my money back so spend it on a future better bio of Gorey.

I guess I don’t really care what sexual orientation an author or artist is. I have always appreciated his creative output regardless of his sexuality. The reason I gave the story a four star rating instead of five stars is that some areas of the book seemed to obsessively reiterate Edward Gorey’s s.o.