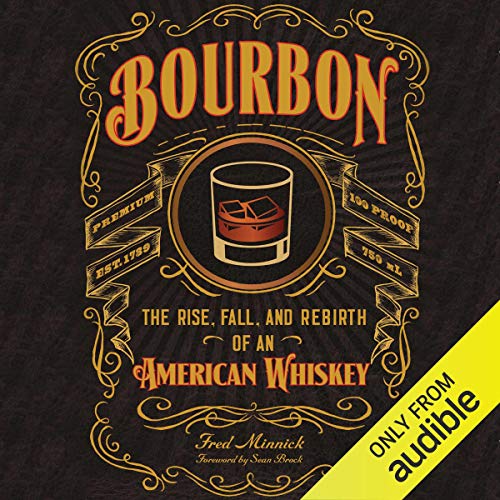 Once and for all, America learns the likely inventor of its beloved bourbon.

Bourbon is not just alcohol - this amber-colored drink is deeply ingrained in American culture and tangled in American history. From the early days of raw corn liquor to the myriad distilleries that have proliferated around the country today, bourbon has come to symbolize America. In Bourbon: The Rise, Fall, and Rebirth of an American Whiskey, award-winning whiskey author Fred Minnick traces bourbon's entire history, from the 1700s with Irish, Scottish, and French settlers setting up stills and making distilled spirits in the New World through today's booming resurgence. He also lays out in expert detail the critical role this spirit has played throughout the cultural and even political history of the nation - from Congress passing whiskey-protection laws to consumers standing in long lines just for a glimpse of a rare bottle of Pappy Van Winkle. And most importantly, Minnick explores the mystery of who most likely created the sweet corn liquor we now know as bourbon. He studies the men who've been championed as its inventors over time - from Daniel Boone's cousin to Baptist minister Elijah Craig - and, based on new research and never-before-seen documentation, answers the question of who deserves the credit.

What listeners say about Bourbon

I was interested to learn more about bourbon, as it is uniquely an American spirit. This book certainly provided the detailed and expansive history I was looking for. The narrator spoke clearly and at a good pace, but it was a little tough to discern when it was narration and when it was a quote.
Though, be warned, the book itself is very visual. I decided to get a hard copy in order to flip through it a bit easier and review the facts. It was only then that I found out the physical book is loaded with pictures of old whiskey bottles, vintage ads, whiskey stills, and other cool photos. So, if you’re on the fence about the audiobook vs. a physical copy, I would definitely advise going with the hard copy.

The beginning was fascinating with the stories and research around who is credited with inventing bourbon. One small nit pick from a Kentucky native is that certain location names and words were mispronounced. Otherwise a great way to pass time on a long drive.

For the bourbon connoisseur

Great book on the history of bourbon, excellent performance from the narrator. If you really like bourbon and history, this was made for you.

it was well read by the narrator.

I not only love whisky and bourbon, but also love books about drinks and history. This is a good one, but more a group journalistic piece than a book. Compared to books as ‘The Search for God and Guinness” and “Shadows in the Vineyard”, about Bourgogne, this one lacks more people and brand history in favor of dates and regulatory aspects. Anyhow, it is a good book for those who love the drink, in special because of its beautiful edition with photos and poster.

I found the beginning and end to be very interesting. The middle was not so much.

Medicinal Whiskey, is it for you?

It was a fascinating history, however, like most history it had it's slow parts. If you like Bourbon or just spirits in general, I highly recommend this book. I worked with Bourbon and spirit barrels in the beer industry for many years and it was great to learn the origin stories of some of the brands of barrels I worked with.

a fascinating history of bourbon

what is bourbon? Is it a whiskey or uniquely American Spirit? This book gives you 250 years of history about America's whiskey. Enjoy listening to this book while sipping your favorite bourbon

Excellent book that was well researched and presented a balanced look into Bourbon's history. Must read.