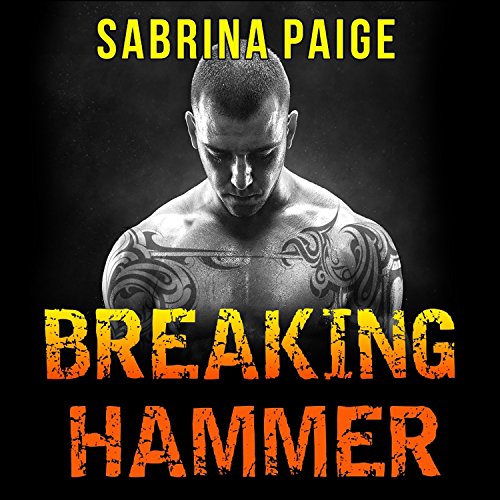 Betrayed by the MC he once loved, mourning the brutal murder of his wife, Joe "Hammer" Holder is just trying to hang on to the pieces of his life. He swore he would never fall in love again--until Meia. Meia belongs to another man--a human trafficker with unlimited political connections and power, who ensures her loyalty by holding someone she loves in his grasp. Love is not part of Meia's destiny--until Hammer.

Can love blossom in the midst of unspeakable pain and loss? And when Meia disappears without a trace, will Hammer's love be enough to help her survive?

What listeners say about Breaking Hammer

UM, WELL I REALLY TRIED.. BUT IT WAS SO DAMN DARK

Sorry, but this was way way too dark and depressing for me and it hardly featured the Inferno MC at all so can't be classified as an MC listen in any way. Joe was still mourning the loss of his wife and now, 2 years on, his daughter is starting to be a problem too. Meia has had a tough life so far - captured, taken into slavery and taught to become a high priced whore and, with her unusual Asian looks, she was a very lucrative asset. But her handler was abusive, jealous, very greedy and held something over Meia's head to make her amenable to all his wishes.

This listen was dark and disturbing and was full of depression, despair, anguish, depravity, suffering, hate, rage, mourning and suicidal thoughts. By the time the romance eventually kicked in (about chapter 22) I too was feeling the despair, depression and anguish. I never felt any chemistry between the H/H and the author could have included some happy scenes towards the end like Meia being introduced to his daughter, the daughter seeing her horse for the first time, the proposal, their marriage, the children's first meeting etc etc etc but no, zilch, nada, nothing.... just overlooked and glossed over. 85% pain and suffering, 5% romance, 5% action and 5% of an Epilogue which whipped through 2 years of what happened after the rescue.

Dual POV's, but even the great narration couldn't warm me to this listen.

Worth a credit? No way, and at the end of this book it rounds up the news from other couples from the series so I think this may be the last one which is handy because I wouldn't buy/use a credit on another one.

A little too much angst..

I have to say what I liked best was a predictable HEA. What I liked least was way too much drama. The chemistry between Hammer and Meia seemed rushed and "off".

Would you ever listen to anything by Sabrina Paige again?

Do you think Breaking Hammer needs a follow-up book? Why or why not?

No,,i think it ended when it should have.

I loved this series!! Each book had me wanting more
I laughed, and felt every emotion.

This book, in this series, addresses the single most tragic topic in the world today, in my opinion; Human Trafficking. I think so many of us can’t fathom the type of evil required to buy and sell a human being and, therefore, we try to pretend that this problem is rare and only happens in third world countries, wrong. I live smack in the middle of Bible Belt, USA and I have heard of two human trafficking organizations within three hundred miles of where I live. In the past 5 years there have been Trafficking rings discovered in Kansas and Oklahoma. I think that this is the single most appalling thing that one human can do to another. IDK how to abolish the world of this tragedy but, I think it starts with awareness, and frankly, overprotectiveness. The Heroine, in this book, was taken as a teenager and trained and prepped to be sold as a sex slave. This book does highlight some of the experiences and abuse that she has/had in her lifetime.The Hero, who’s wife was murdered in the last book, meets the Heroine in the presence of her purchaser. The Hero, now referred to as Hammer, has spent the last three years sinking into despair and darkness; he even contemplates suicide. His observations of the Heroine’s mysterious existence is what leads him to discover the Heroine’s slave status. Hammer wasn’t available to save his wife and the guilt of this has slowly destroyed him. He see’s rescuing the Heroine as a way to redeem himself for failing his wife.
After listening to this book it made me think about what an everyday person can do to help eliminate the buying and selling of human beings. My conclusion is that we can be observant and proactive. If someone’s actions make you feel like something fishy is going on, then observe, note and report what you see and suspect to the authorities. I think that we too often think, “it’s none of my business,” and that’s exactly what Traffickers count on. Please excuse my soapbox but, after listening to this book, I felt I had to put my two cents in. Is this book worth the credit and your time? In my opinion, yes!
-V from Kansas

This will mend your hear it’s fantastic

MC story . Book 3 in the series . Hero is Hammer . Heroine is Meia . At the end of Book 2 (saving Axe ) you read about Hammer (his name at the time was Crunch about April (hammers wife ) being murdered . This is his story . Hammer is fighting the rage and the darkness . He doesn't know how to be a dad to Mackenzie


Love love the narrators. They brought sunshine to the story