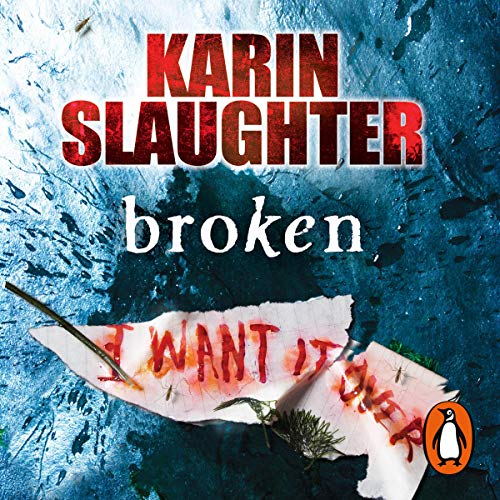 When the body of a young woman is discovered deep beneath the icy waters of Lake Grant, a note left under a rock by the shore points to suicide. But within minutes, it becomes clear that this is no suicide. It’s a brutal, cold-blooded murder. All too soon, former Grant County medical examiner Sara Linton – home for Thanksgiving after a long absence – finds herself unwittingly drawn into the case.

The chief suspect is desperate to see her but when she arrives at the local police station she is met with a horrifying sight – he lies dead in his cell, the words ‘Not me’ scrawled across the walls. Something about his confession doesn’t add up and deeply suspicious of the detective in charge, Lena Adams, Sara immediately calls the Georgia Bureau of Investigation.

Shortly afterwards, Special Agent Will Trent is brought in from his vacation to investigate. But he is immediately confronted with a wall of silence. Grant County is a close-knit community with loyalties and ties that run deep. And the only person who can tell the truth about what really happened is dead….

What listeners say about Broken

Karin Slaughter keep me bound to my chair the whole time I really appreciate her style of writing. Hope to see some more of the other character on their own. She is GOOD!.

Yes I would. This story is engaging, fast paced and has excellent characters​. Karin Slaughter knows how to keep you gripped

I like it when Will and Sarah are together

For all you crime fan's I would definitely recommend. The individual books are good by themselves but the characters do have back story's which follow on through out all her books so I would recommend starting from book 1

Slightly biased as I am now going through the whole series, but this is another excellent instalment, well written and just as importantly, well performed too

Great development of Will and Sarah. And a good story,, right up to the reveal at the end which was a bit weak. will forgive because overall a good story in the series.

Hope the next story is better than this one.

A little disappointed by this story. It seemed drawn out with a less than explosive end. I'm not saying it's awful but Genesis was better for me personally.

Loved it as always

Love it couldn't put it down, kept me grip as with the other karen slaughter books

This was a good listen, even though a bit gory. Well structured and fitted well together. Jennifer Woodward did a good job as narrator. Quite exciting actually

I had really enjoyed pretty girls but I must say disappointed with this story.The listener was encouraged to emphasize and relate to one of the central characters in the book, who is the brunt of unfair accusations.However in the last few lines it is implied that the character is dishonest and the accusations coukd be correct. I had wanted some Justice for this character.I also feel the character of sarah is so sickly Ott although hopelessly floored she ends up assisting a defective with a crime,totally unlikely. Also why have so many random references to rape in a book.

Will Trent continue to develop

This is the fourth Will Trent novel and they are going from strength to strength.

Sara Linton (former Grant County medical examiner) is home for Thanksgiving after a long absence. She finds herself unwittingly drawn into a case where someone dies in police custody and the body of a young woman is discovered in a local lake.

Sara's hatred for Lena Adams, leads her to suspect Lena is somehow responsible (or accountable) for the death in custody.
Sara immediately calls in the Georgia Bureau of Investigation and Special Agent Will Trent is assigned the case.

First book I’ve read like this. I loved it thoroughly but boy did it push the boundaries. The gore and horror was so descriptive and repulsive I had to take a break here and there just to process that this shit can actually happen! Being a complete empath, this book will remain embedded in my brain. Three sisters, younger one goes missing, one of the sisters loses her husband many years later and the story that unfolds after that is so tormenting and quite unbelievable.

this one had me. I also loved seeing the relationships between characters develope. I was not expecting this outcome at all. really enjoyed it. Now on to the next!

Captivating story and the narrator brings life to each character with subtle and effective voice changes.

loved this, another winner. exciting and thrilling. a great story and presentation. excellent series again.

Not nearly as much action as some of the author's other books. It was just a slow steady series of detective work..without any of the dramatic outcomes to accompany it. Very good narrator.