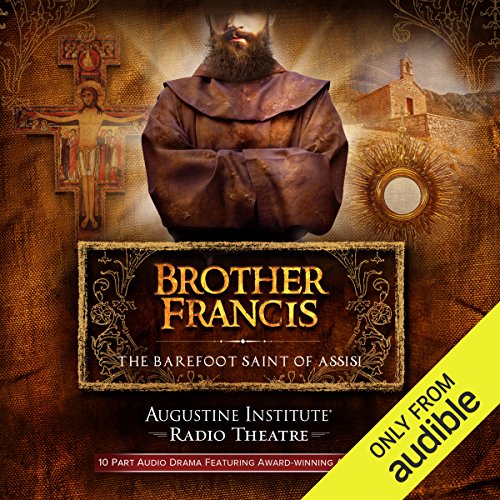 If you think you know Francis of Assisi, you're in for a surprise.

Discover the astonishing life of Brother Francis, the fun-loving son of wealth and privilege who gave up everything for the sake of Christ.

As a young soldier, he encountered suffering. As a victim of war, he began a search for inner-meaning that would redirect his life. As a holy beggar, he embraced lepers, shook hands with the Pope, debated a sultan, and touched the lives of millions.

Now the power and passion of one of the world's most popular saints is captured in Brother Francis: The Barefoot Saint of Assisi, an exciting 10-part audio drama from the Augustine Institute Radio Theatre. Dozens of accomplished, award-winning actors bring characters to life, and cinematic sound and music will quicken the imagination. An unforgettable experience that will inspire your heart and stir your soul.

What listeners say about Brother Francis: The Barefoot Saint of Assisi

This audiobook is incredible! A full cast theatre that really brings you into the life of Saint Francis of Assisi. I laughed, I cried and really got totally engrossed in the storytelling. It left me wanting to learn more about Saint Francis and wishing that the audiobook did not have to end. I think Radio Theatre really is the best term to describe this masterpiece because it is unlike any other audiobook I have listened too.

This was one of the best productions I have ever come across in my life. The voice actors combined with the sound effects and excellent writing make this drama captivating. It was incredibly awe-inspiring!!! The voices were authentic and the story made me want to sell all my belongings and live with the poor like the real Francis. I hope this company makes many more productions like this. It was superior to a movie and/or a book in many ways - the imagination really got to play along with story. BRAVO.

Christian or not, this audio drama will move you and bring you to vibrant imagination of the extraordinary life of one of the greatest men to ever live.

A wonderful encounter with the life of St Francis

Well written, and well produced. We are invited to join Francis in the sounds and conversations at the highlights of his life. It's a journey well worth taking.

Great story of a remarkable man whose love for God reveals so much to all. Awesome performances and delightful musical arrangements. A masterpiece!

I found myself hoping this performance would go on and on. Brilliant and inspiring. A true work of spiritual mercy.

this book gives great insight of brother Francis. this is a great book and is highly recommended.

Would you listen to Brother Francis: The Barefoot Saint of Assisi again? Why?

Don't think so, once was enough.

This audiobook is unlike anything I've ever listened to before. It was like a radio play, with background sounds, music, and a large cast.

Good actors, narrator, sound effects, that I could almost see them like watching a movie ! Truly enjoyed!

My first time learning about Saint Francis of Assisi.
What an incredible figure!
From his day's of revelling as "The King of the Feast" to being blessed with The Stigmata. Brilliantly portrayed by the cast, I felt like I was there every minute of this book. Highly recommended!!!

Well written and produced. Helped me paint a clear picture of St Francis and his life.

Just wow! Severely moving and true to other books about the life of St. Francis.

A wonderful narrated story of the life of Said by Francis

Quite simply it is a must listen , it brings the life of one of the most referred Saints to life in a truly outstanding production , it tells of his life through family hardship and rejection to becoming devoted disciple of Christ

this is a fascinating performance about the life of Francis of Assisi. great cast, informative

A Great Production Telling The Story of Francis of Assisi

I wanted to understand the life of St Francis and came across this audible presentation. It’s much more than an audible book, more of a full theatre production with multiple voices and characters. It made the story very interesting to listen to.