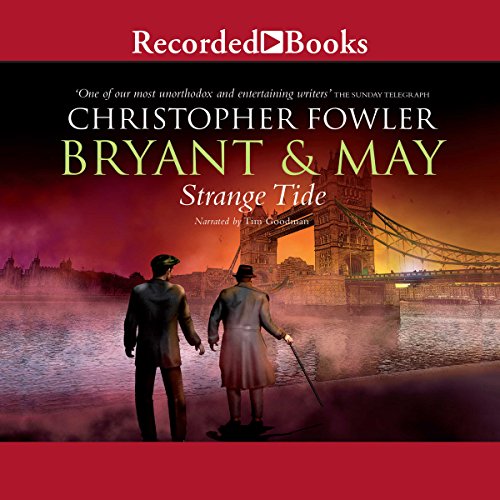 London's most brilliant but unconventional detectives, Arthur Bryant and John May, must plumb the depths of a particularly murky mystery.

The Peculiar Crimes Unit faces its most baffling case yet - and if Bryant and May can't rise to the challenge, the entire unit may go under. Near the Tower of London, along the River Thames, the body of a woman has been discovered chained to a stone post and left to drown. Curiously, only one set of footprints leads to the tragic spot. "The Bride in the Tide", as the London press gleefully dubs her, has the PCU stumped. Why wouldn't the killer simply dump her body in the river - as so many do?

Arthur Bryant wonders if the answer lies in the mythology of the Thames itself. Unfortunately, the normally wobbly funhouse corridors of Bryant's mind have become, of late, even more labyrinthine. The venerable detective seems to be losing his grip on reality. May fears the worst, as Bryant rapidly descends from merely muddled to one stop short of Barking, hallucinating that he's traveled back in time to solve the case. There had better be a method to Bryant's madness - because, as more bodies are pulled from the river's depths, his partner and the rest of the PCU find themselves in over their heads.

Fiendishly fun and rich in London lore, Bryant and May: Strange Tide is Christopher Fowler at his best, delivering more twists and turns than the Thames itself.

What listeners say about Bryant & May

Another reviewer wrote that bringing back Bryant to his right mind showed some writing muscle and I agree. Chelation was a well conceived device.

The story was a little convoluted at the end, but I liked the themes throughout the book. I am a "sap" for all the PCU characters and easily visualize the rickety raucous environment.

This book says it was released on 12/13/16, but I bought the same book in on 3/31/16. I forgot and ordered it thinking it was a new book, but realized when I started listening that I'd already heard it. Of course I returned it, but what's the story? I feel that this is dishonesty on the part of audible.

what a wonderful series

As usual a great story from Mr Fowler and read brilliantly by Tim zGoodman who always manages to interpret the characters so well.