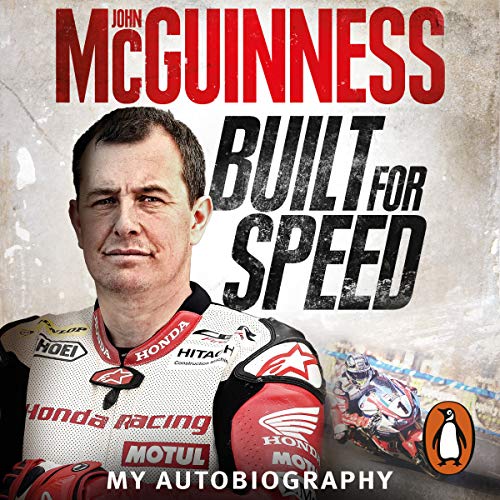 'Then I was there myself, just another face in the crowd, watching the bikes fly by. The smells, the noise and the speed were all there for me to experience. It was like a massive injection in my head and it just blew my mind. I knew within seconds that I was going to be a TT racer. I didn't know how or what I was going to have to do to achieve this, and my dad wasn't going to be keen. Everyone around me was aware of the dangers, but from that moment I knew I had to do it.'

John McGuinness is one of the all-time giants of road racing, with a huge host of victories to his name. But his easy humour and down-to-earth attitude off the bike have always kept people guessing: what's the truth about the man inside the helmet that has kept him at the top of such a sport for over 20 years?

His autobiography tells the whole story, from his humble beginnings in Morecambe and getting his first bike at the age of three, to working as a bricklayer and cockle fisherman before deciding to follow his dream, and finally to his many victories in the most dangerous sporting event on the planet. He tells of what it takes to be a champion in such an exacting sport and to keep winning even though all logic tells you to stop - and when so many of your fellow racers are paying the ultimate price for doing it. This thrilling autobiography gets into the head of the man who stares death in the face and doesn't even flinch.

What listeners say about Built for Speed

quality. true living legend. and all round top man

loved hearing how he became the living legend he is today. going to listen to it again today

Been a fan for many years. John tells his story humbly and with passion.

One of the best bios I’ve listened to for many a year if your a bike fan or TT fan this is for you to enjoy.

Enjoyed every minute of this book. I'd highly recommend it. I had to go out to my garage and fire up my bike after I finished it. 😄 Hopefully he'll write another one.

A great genuine guy who just loves everything about motorcycles, from a kid who scratched about to keep his bikes running to being a world name

Coming from Morecambe this is close to my heart and understanding Johns career after listening to the book helped me come to the conclusion he’s a bloody fantastic bloke , with a lot of skill . I also ride a bike and live in Morecambe! But that’s where the story ends for me ! Unlike John .

what a great read John has portrayed his life and sport brilliantly well worth a read.

a great insight into a great rider. well documented and funny in places. great to hear about DJ and Joey obviously both loved in the memories of the author. loved this book recommended.

A good read whether you're a biker or not.

It helps to know some of the names of the racers but not essential. I met John on 2 occasions and can relate closer to him now knowing his incredible story.

Great read, fantastic book. For the motorcycle track enthusiast a must read !!
A really good insight in British racing scene

Speed In The Blood

Fantastic listen with a great story and the narration fits in perfectly with the book's theme.