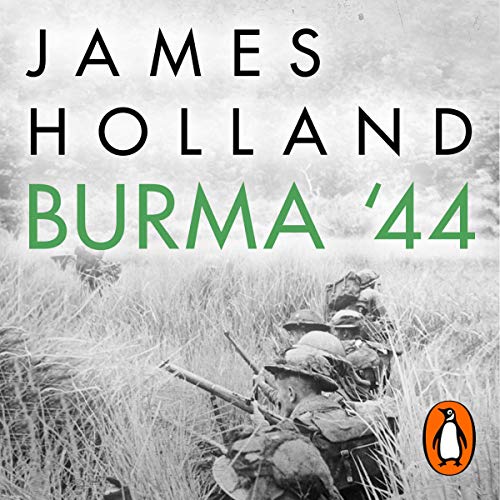 This audio edition includes an exclusive Q&A between James Holland and Al Murray.

In February 1944, a rag-tag collection of clerks, drivers, doctors, muleteers and other base troops, stiffened by a few dogged Yorkshiremen and a handful of tank crews managed to hold out against some of the finest infantry in the Japanese Army and then defeat them in what was one of the most astonishing battles of the Second World War.

What became known as the Defence of the Admin Box, fought amongst the paddy fields and jungle of Northern Arakan over a 15-day period, turned the battle for Burma. Not only was it the first decisive victory for British troops against the Japanese, more significantly, it demonstrated how the Japanese could be defeated. The lessons learned in this tiny and otherwise insignificant corner of the Far East, set up the campaign in Burma that would follow, as General Slim’s Fourteenth Army finally turned defeat into victory.

Burma '44 is a tale of incredible drama. As gripping as the story of Rorke's drift, as momentous as the battle for the Ardennes, the Admin Box was a triumph of human grit and heroism and remains one of the most significant yet undervalued conflicts of World War Two.

What listeners say about Burma '44

History of an often overlooked aspect of WW2.

This book gives details of the fighting during the pivotal battle of "The Admin Box" in which the Allied armies under General Slim for the first time stopped the advance of the Japanese. The book gives an insight into the strategic and tactical changes first introduced by the 14th Army that gave the Allied armies a much needed victory but also gives first hand accounts of soldiers, predominantly British, who fought the battle.
I do like Al Murray's voice but I don't think the post production work is as slick as it could be. (The same could be said for his reading of James Holland's Battle of Britain.)
I enjoyed listening to this book and hope that James Holland will continue the narrative to the end of the war.

a story to hear

The book tells in detail the story of how the dispirited British Army regrouped and stood firm against a determined attack by the Imperial Japanese Army. It speaks of good leadership and careful planning on the part of the British with the support of the Americans. While sad and savage in parts, the book speaks of courage and bravery and fortitude. It provides invaluable lessons about outstanding leadership and how it deals with adversity and set backs.
The story should be told more widely. It compares to other noble stories in British military history.

Little known story of the Battle of the Admin Box

if your a fan of the We have ways podcast and interested in aspects of WW2. This is the audiobook for you. Burma is one of the campaigns of the war and is largely forgotten. This audio book is an excellent narrative that brings the battle of the admin box to light and how it was a turning point for the allies on this forgotten front.

Yet another detailed description of what to me was a little known battle. James has a special talent for painting a picture like very few military historians can.

I have learned a tonne from this, most importantly that I would not have wanted to be there.

A most enjoyable listen, and I learnt a lot about an interesting episode of ‘the forgotten army’s’ war. It was thoroughly researched by James Holland and the singular tales of individual courage and hardship that he unearthed gave the narrative an interesting personal touch, and made it seem more real. I felt like I was there!
I enjoyed the narration by Al Murray too, his tone, inflection and pronunciation of some difficult Burmese and Japanese names was surprisingly good!
I’m glad I listened to the book, and I have to admit I was apprehensive, because the last WW2 book I listened to, ‘On A Knifes Edge’ was do dreadful I couldn’t finish it.
So well done James and Al.

Superbly written and superbly narrated. A great insight into men at war. A vicious environment, incredible sacrifice, courage beyond belief. These men, of various nationalities, gave their lives not just for Empire but to prevent the spread of Fascism/Imperialism. To those men, of all ranks and to those who fought and survived, thank you.

Just like all of the James Holland books this does not disappoint! Lookinf forward to many more of these.
His depth into details is remarkable and makes quite an addictive listen!

This is a really easy listen that still packs a lot of info. The writer is able to take you from the strategies being discussed by generals then going right to the front line to see how that affects the battles and lower ranks. Its absolutely packed with eyewitness accounts that are put into context by the authors description of unfolding events. Obviously every history book should do this but I've never seen it done as skillfully as here. This is my second James Holland / Al Murray book in a month (Sicily '43) and I'll definitely get more.

I can’t get through this.

I can’t get through this. Al Murray is an amusing comedian but his narration is dreadful.

I just loved the story and the narrator's brilliant narration, good job to both of them