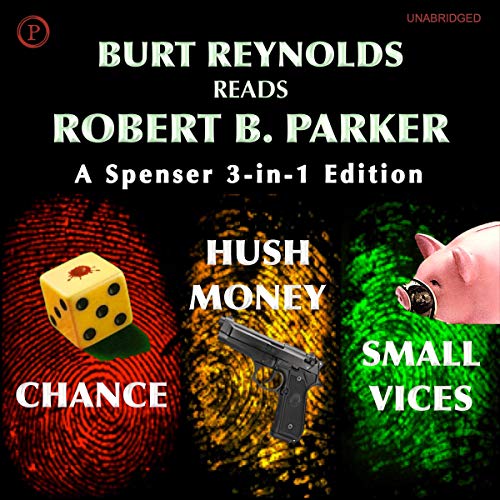 Chance - Big-time Boston hoodlum Julius Ventura wants to find his only daughter's missing husband - at least that's how he puts it to Spenser and Hawk, even though it's pretty clear Julius isn't telling the whole truth. Or maybe not any part of the truth. Something about the case appeals to Spenser's passion for justice, and he launches an odyssey into the netherworld of organized crime.

Hush Money - When Robin Nevins is denied acceptance at an exclusive university, Spenser is eager to investigate. It seems the denial is tied to the suicide of a young gay activist, and as Spenser digs deeper, he is nearly drowned in a multicultural swamp of politics: black, gay, academic, and feminist. Meanwhile, Spenser's inamorata, Susan, asks him to come to the aid of an old college friend, K.C. Roth, the victim of a stalker. Spenser solves the problem a bit too effectively when K.C. turns the tables and begins to stalk him.

Small Vices - Ellis Alves is no angel. But when his lawyer says he was framed for the murder of college student Melissa Henderson, Alves looks to Spenser for help. From Boston's back streets to Manhattan's elite, Spenser and Hawk search for suspects, including Melissa's rich-kid tennis-star boyfriend. But when a man with a .22 puts Spenser in a coma, is the chance for justice dead?

I've been a huge Parker and Reynolds fans for years and was excited to see this option. Reynolds famous sarcasm seemed perfect for Spenser. but this was a huge rushed mistake.
The biggest single problem with this is the editing. The chapters are out of order, making the whole process unbearable. It just seems like it was rushed out in order to capitalize on Reynolds death.

Beyond that, I still enjoyed spending time on a trip with an old friend like Spense with a familiar voice. Reynolds performance was not all bad, but at times it sounded like he was reading the material for the first time, with odd pauses that reminded me of Christopher Walken. I do't know when this was recorded, but would assume it was not long before his death.

Due to the poor editing making the flow so bad, I believe Audible owes me a refund. The first chapter is not the first in the book. It comes in four to five chapters late. And there is even one of the chapters of Chance that shows up in the middle of Hush Money. Just sloppy.

Mr. Reynolds is a fine actor onscreen and onstage, but he is a very, very bad reader. These 3 performances are so cursory and badly produced that they're an embarassment to the company that originally snagged the "name" reader, and should be to Audible, who passes them along without comment.

Reynolds is obviously reading these books for the first time as he's recording them, amateurishly pausing and catching up at odd times where the line breaks on the page. He attempts to give some sort of life to the performance by giving extremely slow and over-articulated readings to certain words that have no relation to to the sense of the sentence or the paragraph. It makes him sould like a drunk.

Plus, he's so close to the microphone that you can hear every lip-smack and breath.

Burt Reynolds does a passable job as narrator. He is not as smooth as Mr. Prichard, the usual narrator. He does a good job with differentiating voices. The stories are good as always. I have said previously that I would think twice about buying a Spenser book if it wasn't done by Mr. Prichard; I was right but the bargain of three books for the price of one was too much to pass up.

I have all of these titles on the original audio tapes. Robert B. Parker was one of my absolute favorite authors especially the Spenser/Hawk series. Wonderful use of language and well-developed character and stories. What a mind!. Burt Reynolds did a fantastic job bringing the characters and the stories to life. Thank you for resurrecting these books and putting them on audio.

It was a bonus to hear Burt R. read the books.

I will admit that it took a beat to get used to Burt Reynolds’ different character voices. That is only because I’ve read all the books and hear them differently. Also, Avery B. who performed as Hawk on the tv show owns that character. It would be awesome to hear him read the entire Spenser series. I can imagine everyone wanting to hear Hawk read Spenser’s exploits aloud.

early spenser books are the best. burt
t
should read them all . for me he is spenser

the music which fades in and out throughout the story is both distracting and overblown for the simple reading of a robber bee Parker tail. it distracts from the story makes it almost impossible to hear at times and changes the ambiance of the book. plus which I thought this was three books not just one?

The narration was a crime!

Tried to get past it, but couldn't. Where the hell was the production team, jeez.

Audio is unclear at times. Even slowing down the audio it was not clear. Various accents were not very good.

Three of the very best Spenser novels with a compelling and masterful reading by Burt Reynolds, These were before Robert B. Parker started writing garbage imitations of his better works. The only multi-title Spenser audiobook that I know of..

As a great fan of Robert B Parker this is just wonderful to hear Burt Reynolds narrate his style so well. Got it just right.

Never listened to the Spencer book before and have to say enjoyed them, however the sound quality is pretty darn awfull at the beginning of Chance, it got better but still had to turn the volume up, missed the first two to three chapters due to bad sound quality.

However did enjoy them albeit a wee bit predictable, (but that maybe as I read to many detective stories) they are funny and nice enough stories. Mr Reynolds has a pleasant enough voice, for audible, but I think to soft this maybe the reason for the sound quality. (but this is not something I am used to with audible, it feels the books are rushed to put together as a previous revieuw says)

Due to sound quality I have taken 2 stars off as it really does not help the books. I will listen to another but due to the number of the book can not start at the beginning really, maybe listeners advice on this.