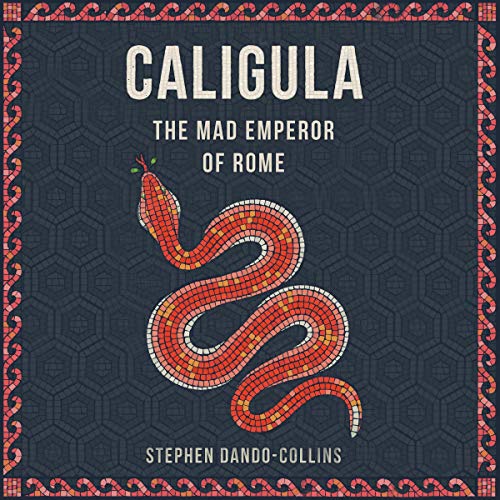 Explore all of the murder, madness and mayhem in Ancient Rome during the reign of the mad emperor, Caligula.

In this book about Rome’s most infamous emperor, expert author, Stephen Dando-Collins chronicles all the palace intrigues and murders that led to Caligula becoming emperor, and details the horrors of his manic reign and the murderous consequences brought about at the hand of his sister Agrippina the Younger, his uncle Claudius and his nephew Nero.

Skillfully researched, Dando-Collins puts the jigsaw pieces together to form an accurate picture of Caligula’s life and influences. Dando-Collins’ precise and thorough examination of the emperor’s life puts Caligula’s paranoid reign into perspective, examining the betrayals and deaths he experienced prior to his time in power and the onset of a near-fatal illness believed to have affected his mental-health.

Enjoyable history. Discounting to have it ruined with an idiot’s politics chapter on comparing Trump to Caligula. Seriously? Grow up.

The narrative is fine but the book is awful. If I could give this book zero stars it would be a generous rating. Horrible

Book was great minus the addition of personal politics into the mix, made it seem immature and amateurish, time and place and sadly this wasn’t the time or place, I thought I hit a button and another book was playing, do better, thank you

I like the narrator James Anderson Foster on all his readings however this is clearly written with spite and misleading quotes that serve the democratic mind of utopia rather than our Presidents heroic actions to stand up to dictators whom seek to exploit our constitution and the greatest President this world as seen ... history as will prove the knives were out early even by his own party , as for this book , history will forget it and see it for what it is , propaganda all is phony ( Bob Dylan ) and ( We'll See ) to quote President Donald J Trump ... ( a waste of a credit )

Another immersive book by Stephen Dando-Collins

I've always greatly enjoyed the books by Stephen Dando-Collins for their sheer immersiveness and have listened to nearly all of them here at Audible. My favorites are probably "Caesar's Legion: The Epic Saga of Julius Caesar's Elite Tenth Legion and the Armies of Rome" and "Rise of an Empire:How One Man United Greece to Defeat Xerxes's Persians.

Although not as much of an emotional journey or action-packed as the above two titles, you are soon immersed in the era and intrigued by the figure of Caligula. The book starts with an interesting introduction where the author dispels some common myths, considers a few hypotheses and mentions his sources used. After that sources are also referred to occasionally but not without breaking the pace of the book. After that it's a smooth ride from start to finish. As can be expected, there are quite a few names and family relations that are not always as easy to keep track of but with a bit foreknowledge it should not be overwhelming.

There was the occasional (although brief) annoyance when the narrator completely mispronounced French and Latin (place)names. For example the famous general "Lucullus" was pronouned as "Lusullus". The French town of "Beane" as "Bee-own" and "Nîmes" as "Knees-mes". Also in expressons like "Pièce de résistance" the word "pièce" is pronounced as "peace". The name "Vercingetorix" ended up as "Ver-Sin-Gay-TOH-ricks". In short: how an American tourist would pronounce it - but from a professional narrator you expect more. After all, with some minor research this could easily have been avoided.

All in all, definitely listen to this book if you want to have a brief foray into the life of Caligula!

A Fantastic Biography of a Notorious Emperor

This a fascinating biography of one of Rome’s most notorious Emperors. Well researched but also not too dry as many biographies/history books tend to be. It tells the story of the Emperor Gaius (Caligula) from birth to the aftermath after his death. It provides an interesting picture of Caligula while also disproving many myths surrounding him.

What other reviewers have pointed out is that this book also compared Caligula and Donald Trump, this is not the first time this has been done nor will it be the last. I personally think the comparison is an insult...to Caligula. Donald Trump is an idiot and megalomaniac but at least Caligula had the excuse of mental illness.

If this comparison bothers you then simply skip the last chapter. It is only discussed there. Otherwise I would encourage anyone who is interested in the Emperor or his family members to check out this book, I promise you won’t be disappointed.