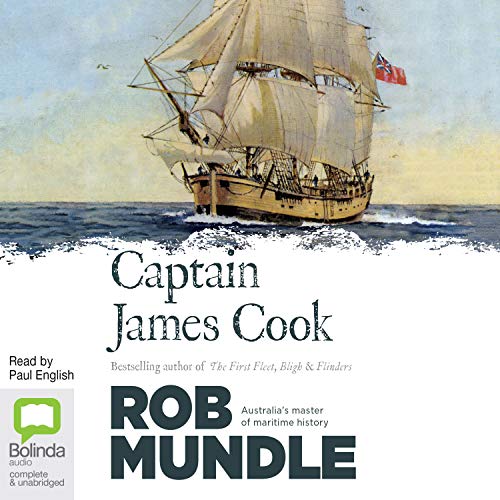 From Sailor to Legend - the story of Captain James Cook.

Captain James Cook is one of the greatest maritime explorers of all time. Over three remarkable voyages of discovery into the Pacific in the latter part of the 18th century, Cook unravelled the oldest mystery surrounding the existence of Terra Australis Incognita - the Great South Land. He became the first explorer to circumnavigate New Zealand and establish that it was two main islands; discover the Hawaiian Islands for the British Empire; and left an enduring legacy.

Rob Mundle introduces us to an unlikely sailor in a teenage Cook, who through the combination of hard-won skills as a seafarer, the talents of a self-taught navigator and surveyor, and an exceptional ability to lead and care for his men, climbed the ranks of the Royal Navy to achieve legendary status among all who sailed and mapped the world.

Slow start but once the sailing starts the background comes in handy.
superb book.
great narrator.

This book has been put together extremely well. The story of Captain Cook is very interesting.

The book is very thorough and informative. It was an enjoyable read. I learned a lot.

Very well researched, written, and narrated. very educational.. great fun. Captain Cook circumnavigates the world and discovers new lands and cultures. Life aboard his ships is skillfully described. its almost like being there.

A little slow in pace, but all in all, very informative. I enjoyed the story.

I loved this book, it is a very well researched account of Captain Cooks life, it describes his sea fairing journeys, encounters and rise to world acclaim with a perfect balance of detail without reciting his logbooks verbatim. It is very well narrated. I only wish I had been able to read this before I traveled around Australia and south east Asia as it would have greatly enhanced my trip.

Very engaging narrative which is very descriptive and this lends itself to a great listen.

Thoroughly enjoyed the book. Just to be a bit pedantic, I'm pretty sure the word is Longitude, not Longditude as the narrator repeatedy says in the reading.

What an amazing book. Perfect narration.

Really loved this book. I'd not read any books about Captain Cook before and this has made me want to read even more about his voyages and life.

What a life he had. A true British hero. Very well written. Kept my interest throughout. The narrator was also outstanding.

I thought I knew the story of Captain Cook’s voyages when in fact I had only heard of them.
An amazing life. A tremendous achievement. A terribly tragic end. Thank you to everyone involved in bringing this work into being.

great novel based on the great captain James Cook. well read . interesting and a historical account. just love the history involved . the frank honest view of the world.

incredible, noone knows what they went through

Amazing and interesting book, totally absorbed from beginning to end. love this book . brilliantly narrated by the author.

Excellent story but some irritating pronunciation

An excellent, fascinating history and very good narration other than some mispronounced naval terms. These really are 'sand in the oyster ' moments that do more than irritate. They imply a lack of care and also diminish the credibility of the narrator. It's curious that, in so many audio books, these errors are missed by editors.

A joy to listen to

I read the book a while back and to listen to the audio version has been a joy.