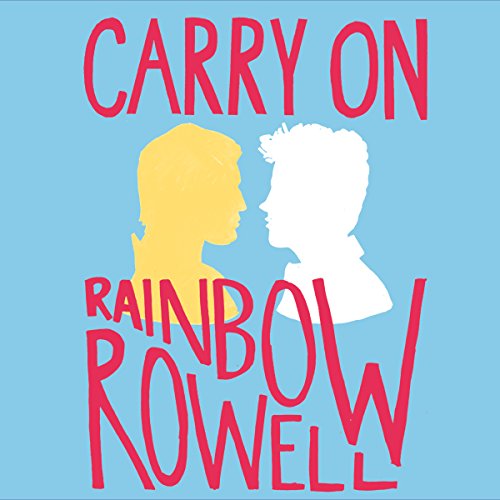 Simon Snow just wants to relax and savour his last year at the Watford School of Magicks, but no one will let him. His girlfriend broke up with him, his best friend is a pest and his mentor keeps trying to hide him away in the mountains, where maybe he'll be safe.

Simon can't even enjoy the fact that his roommate and longtime nemesis is missing, because he can't stop worrying about the evil git. Plus there are ghosts. And vampires. And actual evil things trying to shut Simon down. When you're the most powerful magician the world has ever known, you never get to relax and savour anything.

Based on the characters Simon and Baz who featured in Rainbow Rowell's best-selling Fangirl, Carry On is a ghost story, a love story, a mystery and a melodrama. It has just as much kissing and talking as you'd expect from a Rainbow Rowell story - but far, far more monsters.

What listeners say about Carry On

This book was a lot of fun. The twists and turns if the plot were a little *too* foregrounded, removing the element of surprise. But the characters were endearing and very well fleshed out, and I bought the romance wholesale. The re-imagining of chosen one narratives was fresh and enjoyable.

The brilliant narrator really gave each character a unique voice, which I wouldn't necessarily have done in my head if I read the text.

usually narrators make things a tad awkward with these kinda book but this 1 was gr8, im sure it helped that the book was already a fun n interesting read.

I'm a middle-aged woman, but I regularly enjoy audio books that are written for children and young adults. This time, however, I wasn't impressed. There are lots of mentions of incidents that happened in the years before this book, and there is an awful lot of tortured (and torturous) teen romance. The story itself seems to be told in between comments about past incidents and mooning over other students.

I loved it. The voicing was perfect. Characterization (changes for the women and other men and all) was on point.

And I wish that there was more of Baz and Simon to read.

The poetry in the mundane everyday. Witty & powerful in her telling of a story about life & things that happen to be.

I'd recommend this book to any Harry Potter fan or follower of Mike Carey's Unwritten series. Funny from start to finish, a really interesting take on the fictional physics of magic, the collective unconscious and the evolution of language. Some brilliant and obvious plot staples that hide in plain sight all the big twists and, cannot overstate by refreshing an LGBT+ fantasy novel. 10/10 will absolutely listen again.

It took a bit of time to hook me in. The writing left something to be desired and the voices for Simon and Baz were sometimes hard to distinguish. But all in all it was a good listen.

I really really like 'Carry On' (all of Rainbow Rowell's books work well for me, but this is the perfect combination of plot, characters and romance - plus, it's gay, they're roommates, and Baz is a vampire). As a book, it's not perfect - which is why I've given it only 4 stars out of a possible 5 (but an overall score of 5/5 because I just love it).

That said, actually some of the things that I sort of like but I think people would quibble with in the text (like all the many many line breaks and broken sentences) are completely hidden in this version. And it's clear what Rowell is doing with her writing, in that it sounds completely natural read out.

The first time I listened to it, I thought the performance was only OK. I sort of wished that they'd cast two actors as Simon and Baz (I know there are other voices but these are the main two), and there are a few moments where big action is happening and the character voices are still quite flat, as though they're still bantering with each other. I do still think more could be done with these scenes from a direction point of view, but this is massively suppassed by the vast number of things that Euan Morton gets right (practically everything, all the voices are amazingly distinct - and the narration is as interesting as the dialogue, which is also delivered really well even though he's talking to himself). I could and have listened to him for hours.

I very much recommend getting this book - although I'd probably try Fangirl first.

As much fun as reading the book. Really enjoyed it. Took a while to adjust to Simon's voice as it was gruffer than what I'd had in my head. But still excellent.

I absolutely love this book!!! The plot is exciting and we'll thought out, but my favourite thing was the characters and their relationships, especially Simon and Baz

Loved it so well done. As a Harry Potter and Fangirl fan I was a little scared I would be disappointed but I was not at all . It was great and I really liked Simon and Baz.

When's the next one coming out?

I'm so obsessed with Carry On, (it's my third time reading it, first two times were with the paperback) and I was pretty iffy with listening to it in case it might change it too much for me, but Euan Morton did a fantastic job recreating it and I crave more of Rainbows magickal world than I have before, honestly. Reading it and listening to it gave me two entirely different perspectives and I was not dissapointed.

Full of love and fun

Loved it! Naration was okay, character voices where pretty consistant, only one scene that was a little harder to follow. Not deep or meaningfull but a sweet story with a lot of love.

I loved this book. Simon and Baz are adorable. My favourite book by Rainbow yet.

I enjoyed the performance greatly and the story was definitely interesting and engaging. The author has quite obviously written fanfiction (I would hazard a guess that this is a heavily reworked fanfiction, in fact) and does fall into some of its traps which bring down the quality of the writing. The biggest issue I had was perspective changes occurring too often, which makes things hard to follow in an audio book.

I don’t know why it took me so long to start reading this book but I'm also glad I didn’t when it was standalone. More Simon and Baz (and Penelope) please!

Would've only been perfected with multiple voice actors for the different main characters. The different perspectives are perfect, definitely listen to twice.

I struggled to put this book down. Once you get past the obvious HP parallels, you start to admire how charming and modern Rowell's magical world really is. The world is so appealing to lovers of literature, where a magician has to be well-read in popular culture to fully harness their powers.

This book was fantastic, had me hooked from the start. Recommend to anyone that enjoys fantasy stories

but I feel like everyone must or how else would you stomach how annoying simon is...

After reading Fan Girl, I didn't think this author could write a book better designed to be adored by me. How wrong I was. For fanfiction lovers, this is what we've always been waiting for, and what everyone told us wasn't worth wanting.
It's genre defining because it is a brave and new step into blended fiction genres. And now that this book exists, it seems so obvious that it needed to exist.
I don't know what reading this book is like for "normals" who aren't familiar with the tropes and conventions of quality fanfiction (of which there is much). I can only say so gobsmacked I am that this book exists and it is canon.
Performance was killer, spot on.