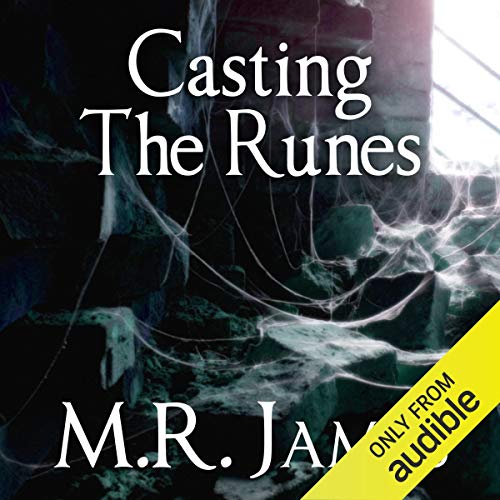 The tale of a man who unwittingly angers a sorcerer, who is assumed by some Monty scholars to be based on the self-styled 'Great Beast,' occultist Aleister Crowley.

Montague Rhodes James was a noted British mediaeval scholar and provost of King's College, Cambridge (1905–1918) and of Eton College (1918–1936). He is best remembered for his ghost stories which are widely regarded as among the finest in English literature.

One of James's most important achievements was to redefine the ghost story for the new century by dispensing with many of the formal Gothic trappings of his predecessors, and replacing them with more realistic contemporary settings.

'Montague Rhodes James has an intelligent and scientific knowledge of human nerves and feelings; and knows just how to apportion statement, imagery, and subtle suggestions in order to secure the best results with his readers.' HP Lovecraft.

Actor David Suchet is best known for his definitive portrayal of Hercule Poirot, the Belgian detective created by the legendary mystery author Agatha Christie, in a number of international television productions. He narrates his story in Poirot and Me.

What listeners say about Casting the Runes

Short, not graphic, mildly creepy, great narrator. For fans of English Goths or Victorian atmosphere. Fun! Made cleaning kitchen cabinets entertaining, and you can't beat that!

This is my favorite story and the first that introduced me to MR James the author. I had an audio drama from the BBC called the Conception of Terror, tales based on MR James. It was a collection of some of tales updated for the modern era. Casting the Runes was the first and my favorite. It was a treat to read and listen to the original, superbly performed by thespian David Suchet. Still packs a punch.

Suchet does M.R. James so well

I think i have five different versions of M.R. James stories, each with a different read. I love Derek Jacobi. But David Suchet really nailed this and the other James stories on Audible. I heard things in the stories i had not heard before.

This story was the basis of the excellent B horror flick from the 1950s, Curse of the Demon (Night of the Demon) with Dana Andrews. Really suspenseful film with decent effects for the time. Love the short story more. Has an academic air. I guess James was an Oxford (?) don. Comes thru. But he is a master of psychological horror. Can see how he might have influenced Lovecraft.

Excellent narration. I don't think the story is one of James' best. towards the end it was a little hard to follow. and the ending didn't seem to flow well with the beginning.

performance was great and lovely to listen to... but after literally just finishing this 5 minutes ago... I don't remember the story. I don't remember character names or the plot or why any of the action was so important...which is not what you want in a story. The narrator was excellent, but absolutely nothing about the story itself stayed with me. I'm glad this was one I got for free.

Good solid little story. Very entertaining!
Narration was very nice! It was a lovely way to spend my time.

Once I looked up the word "runes", I was able to get the gist of this enigmatic story. Not the easiest plot to follow, but David Suchet excels in conveying the darkness and suspense of the tale.

David Suchet is an INCREDIBLE narrator, and I was so excited to see he did a couple of MR James stories! As classic horror short stories go, this one has a more clear arc and sense of closure than most. Definitely recommend checking it out.

not my cup of tea. not much of a review but it wasn't much of a story.

Found this book a bit confusing. Just my opinion. The audio need more details so the mind did not wandered.

An encounter with evil

Yet another brilliant tale from M R James and told with perfection by David Suchet. This is about an encounter with an evil man hell bent on revenge. It is also fascinating to hear that the character is based on one of M R James's contemporaries. This must have ruffled a few feathers in its day!

I like the work of MR James immensely. Often, however, his work is slightly spoilt by a poor narrator. In this particular case David Suchet is an utterly brilliant reader of the tale. I would happily award 6 stars if it were possible. A rare treat.

James's stories were written to be read aloud - by himself. It's lovely to have Suchet read them to us.

.....as are all of Mr Suchets readings of M.R. James. such a pity there aren't more.

A great atmospheric, spooky story. It's in the trees,it's coming! It was made into a British film, "Night of the Demon".

m r james at his best read superbly by David suchet. having read all of m r james ghost stories it is a real pleasure to listen to this rendition

A decent ghost story, enhanced by the reader. Definitely worth a try at the price.

A tale of occult curses

A ghostly tale about runic curses. The superb writing and narration makes it atmospheric. A perfect tale to listen by the fireside or a campfire.

I really enjoyed this. An intelligently written story. The narration was excellent and brought the story to life.

Excellent narration of a ghostly tale

M.R. James' ghost stories are wonderfully atmospheric and creepy and David Suchet's narration brings them wonderfully (horribly!) to life. The characters are well defined with different voices / tones and when put together with D.S.'s lovely voice made the whole listening experience great. I will be listening to this again but I will also be hunting out more books/ stories narrated by David Suchet as his voice is lovely and his narration very skilful and engaging; even without seeing his expression, the feelings of the characters came through brilliantly. Loved it.