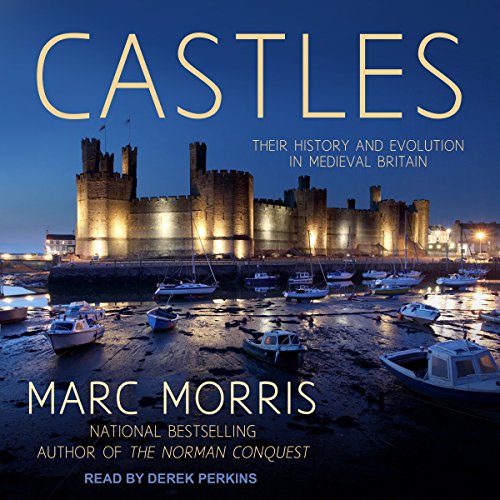 Beginning with their introduction in the 11th century, and ending with their widespread abandonment in the 17th, Marc Morris explores many of the country's most famous castles, as well as some spectacular lesser-known examples.

At times this is an epic tale, driven by characters like William the Conqueror, King John, and Edward I, full of sieges and conquest on an awesome scale. But it is also by turns an intimate story of less eminent individuals, whose adventures, struggles, and ambitions were reflected in the fortified residences they constructed. Be it ever so grand or ever so humble, a castle was first and foremost a home.

To understand castles - who built them, who lived in them, and why - is to understand the forces that shaped medieval Britain.

"Captivating and entertaining. More than just a study of architecture, weaponry, and personalities, Castles pieces together a comprehensive overview that gives a fresh take on medieval and early modern Britain and the forces that shaped it." ( BBC History Magazine)

This is a terrific book and well narrated. I’ve listened twice and probably will again. It’s about so much more than castles. There’s a lot of history associated with the castles that I found very interesting.

Covers the fact a castle is part home part defensive structure from origins through to the end of the Civil War. Very enjoyable.

Absolutely loved this book. Marc is incredibly informed but also funny and down to Earth; it’s a great combination!

Narration got a lower score just because of his pronunciation of the word ‘trebuchet’; I found it very grating! Aside from that one detail it was very well narrated and captured the tone and humour well.

Having a love of history, this book was very interesting and informative. Will easily listen again.

Telling the history of British castles. The book is both authorative without being too academic and the narration is very good too.

I don’t have a particular genre I like, all I ask is that the author is knowledgeable about a subject and can write in an engaging style and that is exactly what thus book delivers. I can finish very few books even ones that are very highly regarded but I could probably even listen to this one again