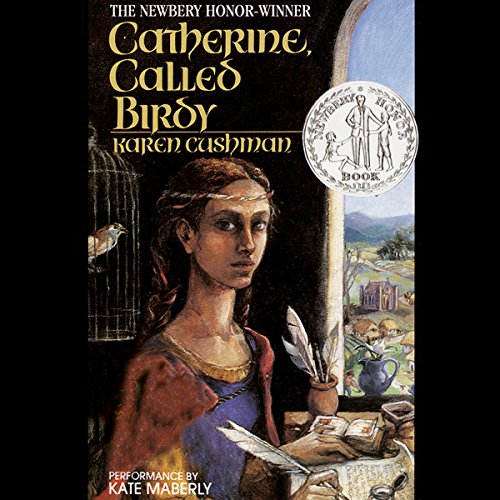 Karen Cushman's Newbery Honor-winning book tells the story of a medieval girl who works to avoid the marriage her father has arranged for her during her 14th year.

Contained in this program is Catherine's diary - Catherine, called Little Bird or Birdy, daughter of Rollo and the lady Aislinn, sister to Thomas, Edward, and the abominable Robert.

'Begun this 12th day of September in the year of Our Lord 1290... I am commanded to write an account of my days. I am bit by fleas and plagued by family... Tangled my spinning again. Corpus bones, what a torture... Spent two hours embroidering a cloth for the church and three hours picking out the stitches after my mother saw it... Picked off twenty-nine fleas today.'

Catherine's mother wants to teach her the skills of the lady of the manor and to prepare her to be a gentle and patient wife. Her father wants only to see her married off, and profitably. Catherine fancies herself a painter, a Crusader, a maker of songs, a peddler, a minstrel, a monk, a wart charmer... Of all the possibilities, she has ruled out only one: being sold like cheese to the highest bidder.

Against a vivid backdrop of everyday life on a medieval English manor, Catherine's earthy, spirited account of her 14th year is a richly entertaining story with an utterly unforgettable heroine.

My daughter and I enjoyed this immensely. This is historical fiction at its finest. Would listen to again.

I was reading along from the book version on archive.org and it must be a newer version because the one i found online to read along with at times has many more parts, this version has a lot cut out. The narrator fits her personality very perfectly though, I like her much more than the other. This is my preference. She has a much younger voice and it suits her, and she gets the tone well too.

I really enjoyed listening to this book and learning about all the saints for each day of the calendar year.