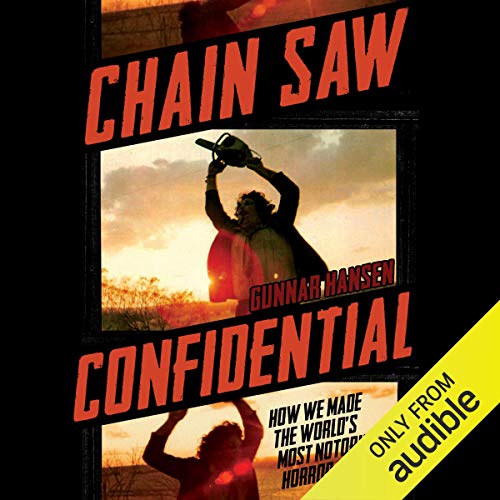 The original 1974 film The Texas Chain Saw Massacre seized the imaginations of audiences and critics, going from controversial cult sensation to being ranked by Total Film as the greatest horror movie ever made. It's been shown at Cannes, briefly banned in England, and included in the permanent collection of New York's MoMA. This fascinating literary memoir of the making of the film comes from the unique perspective of Gunnar Hansen, the actor who played the chain saw-wielding Leatherface. A critically acclaimed poet and author, Hansen tells the real story of the film, debunking myths, giving behind-the-scenes details, and offering insights on the film's reception and our enduring fascination with the horror genre today.

Gunnar Hansen sets out to give us the real dope—and an eye-opening lesson in film-making along the way.

It’s just as juicy and pop-cult-crazed as it sounds—the heightened tension on the set, the unending brutal heat, blown takes, and the pot brownies, everyone just barely holding it together—it gets a little visceral.

Not to mention the horrific truth about the radical financial and physical exploitation of the cast and crew.

Chain Saw Confidential, is a remarkable film history document, that covers everything from scene-to-scene breakdowns, to the philosophical and aesthetic debates over the nature of horror itself.

Gunnar Hansen himself reads his work with aplomb.

The Only True Story of The Texas Chainsaw Massacre

Gunnar Hansen's book provides an intriguing insight into arguably the world's most controversial horror film. He dispels all the rumors and sheds light on how the mystique of the film garnered it the reputation it still has to this day.
His narration is excellent and engaging. How could this mild-mannered writer go on to be such a notorious film icon? I really enjoyed his retelling of the events surrounding the film but also liked his personal background and stories of the hardships everyone faced personally and monetarily. For a film that seemed so real, this book's brutal truth hits even harder.
I recommend this wholeheartedly to anyone interested in not just horror but films themselves as it's an eye opening look into how a $3,000 budget stretched to international acclaim and infamy. RIP Gunnar Hansen.

Gunnar Hansen is a poet & English professor who also happens to be Leatherface. Recommended for fans of the movie, anyone interested in low budget filmmaking, and people interested in the philosophy of horror.

My family's always been in meat

This is a solid production history for one of the greatest horror movies ever made, written by the actor who played its star villain. Gunnar Hansen was a smart and capable writer, and as well as offering his own memories he has interviewed many other cast and crew members to get their thoughts (as well as John Landis, who seems to represent the movie's fan base). Hansen doesn't linger too long over any aspect of production, and unlike a lot of these sorts of books he doesn't skimp on post-production even though he obviously was not present for it.

Hansen had a pleasant speaking voice, though sometimes a little monotonous. An easy listen.

If you're a fan of Texas Chainsaw Massacre then this is a must read. Gunnar Hansen (Leatherface) gives us the backstory on every facet of making TCM, from casting to distribution. What the cast and crew had to endure while filming in the sweltering heat of August in Texas is possibly more frightening than the film itself. A definite recommend.

It was perfect and inspiring, Gunnar Hansen is a perfect narrator and he sets the tone perfectly

A Haunting and Intriguing Look Into Making TTCSM

Would you consider the audio edition of Chain Saw Confidential to be better than the print version?

Having the author read the book is always a plus for me. The author can properly add the correct inflection and make the story more intriguing. If the audiobook was narrated by someone else, I would have said no.

What other book might you compare Chain Saw Confidential to and why?

I haven't read many books like Chain Saw Confidential before. It definitely stands alone as one of the best books I have ever heard/read about the making of a motion picture.

Which character – as performed by Gunnar Hansen – was your favorite?

This book definitely shows you the absolute hell these people went through to make this film. There were many parts where I just pitied those poor people. But hey, they made a damn good movie.

it's great so far I love Texas chainsaw massacre and getting a behind the scenes look so to speak is great. I'd like to play leatherface someday but it'll never happen haha

If u have ever wondered why Texas chainsaw o.g. Is so amazing but can’t exactly put your finger on it, this book gives good insight to why that is. I extremely enjoyed this book to one of my all time favorites.

Fantastic insight. I had to dig out the movie

Loved it. Great insight into a movie that had so much more. Definitely worth a second listen.

Really enjoyed the real story of the Texas Chainsaw Massacre from the man himself. Really funny at times and shows how the mind can insert things into a movie that just aren't there. Hilarious but also a chilling sign of today's Social Media times, that people can be completely fooled into thinking this really happened lol. Gunnar Hansen's narration, easily flows you through this great audiobook.

the texas chain saw massacre has long been my favourite horror film, and this book not only reinforces that, but enhances it. i cant wait to watch it again having listened to Gunnar Hansen's insightful, no nonsense book. well spoken and never cheesy, his cool voice and attitude made this book for me. so much trivia and insight into what made chainsaw a great movie, along with a great chapter on what horror is - cannot recommend this book enough. ESSENTIAL for fans of the movie and horror in general.

Brilliant story from the perspective of Leatherface and other cast members. The only problem is the quality of the recording, which is terrible. You have to turn it up really high if you are anywhere other than at home or in a library and when you do, Gunnar's voice becomes muffled and difficult to understand. Shame because it really is a very interesting listen.

Absolutely amazing informative and gripping Gunner Hansen (leatherface) we miss you .He was very descriptive and never slagged anybody off even though he had good reasons to.

The story of a classic

Fascinating story read beautifully by the late Gunnar Hansen. Well worth a listen, especially if you're a fan of TTCSM. Full of great insights and brilliant stories.

As a filmmaker myself I absolutely love this book and what it says about horror and cinema in general. It is a perfect testiment to how pushing the boundaries can lead to scrutiny as well as praise.