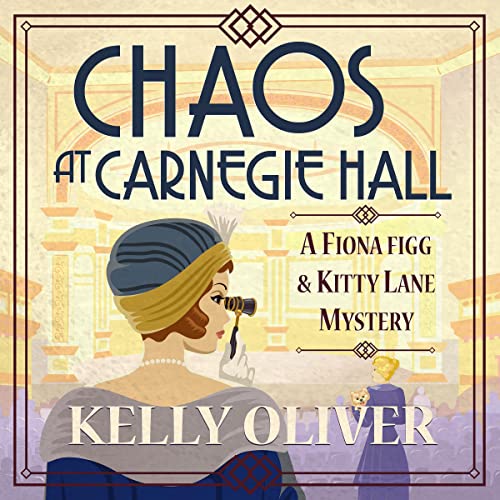 Can Fiona catch a killer and find a decent cup of tea before her moustache wax melts?

Notorious spy, Fredrick Fredricks, has invited Fiona to Carnegie Hall to hear a famous soprano. It’s an opportunity the War Office can’t turn down. Fiona and Clifford are soon on their way, but not before Fiona is saddled with chaperon duties for Captain Hall’s niece. Is Fiona a spy or a glorified babysitter?

From the minute Fiona meets the soprano aboard the RMS Adriatic it’s treble on the high C’s. Fiona sees something—or someone—thrown overboard, and then she overhears a chemist plotting in German with one of her own countrymen!

And the trouble doesn’t stop when they disembark. Soon Fiona is doing time with a group of suffragettes and investigating America’s most impressive inventor Thomas Edison.

When her number one suspect turns up dead at the opera and Fredrick Fredricks is caught red-handed, it looks like it’s finally curtains for the notorious spy.

But all the evidence points to his innocence. Will Fiona change her tune and clear her nemesis’ name? Or will she do her duty? And just what is she going to do with the pesky Kitty Lane? Not to mention swoon-worthy Archie Somersby...

If Fiona’s going to come out on top, she’s going to have to make the most difficult decision of her life: the choice between her head and her heart.

What listeners say about Chaos at Carnegie Hall

Fun characters in a light yet clever cozy mystery. Just the right entertaining listening experience to distract from the woes of world news.

A good edition to the Fiona Figg series

It took me awhile to get used to the new narrator but I really enjoyed the story and the new characters.