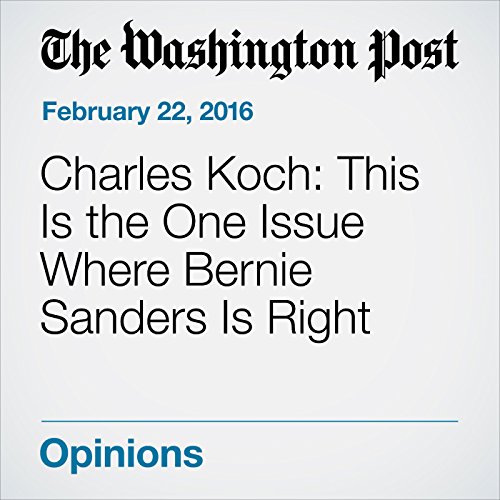 Charles Koch: This Is the One Issue Where Bernie Sanders Is Right

"Charles Koch: This Is the One Issue Where Bernie Sanders Is Right" is from the Opinion section of The Washington Post. It was written by Charles G. Koch and narrated by Sam Scholl.
©2015 The Washington Post (P)2015 Audible, Inc.

4 stars for admitting he is a "have" and the majority of us are the "have nots".

Wow! This ALMOST made me respect Charles Koch... That says a lot because I am a staunch Bernie supporter and Koch obstructionists, particularly when it comes to their efforts to stack local school boards with candidates that want to defund and break our public schools... However, this article made me take a step back and understand that they are not Evil people, they are just misguided. As a recent graduate with a bachelors degree in economics, I understand the problems involved with bigger government and the harm that happens when the government picks winners and losers. Even Bernie would agree that BIG Government is not a good thing, because too much regulation hurts small business and is a waste. However the C. Koch's vision is for NO Government, and that is where he is misguided.... Even Ayn Rand admitted that her Atlas Shrugged society was not achievable because it was would be utopia and That's not how real life works.... It is interesting how the pot is calling the kettle black.... C. Koch suggests that Bernie wants the government to run everything and take away all your choices... Bernie is not that extreme.... He actually wants to roll back a lot of regulations that harm people... The extremist is C. Koch, who would allow our education systems fail this generation of Innocent children, to make sure that the government fails. He must make all government look bad... Nice try Koch! 4 stars for a great effort to manipulate economically ignorant people into liking you.