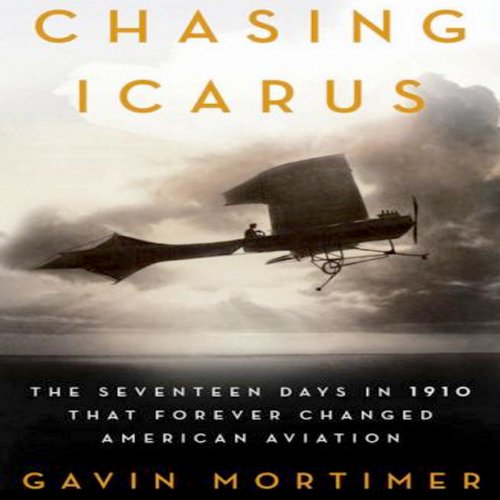 In October of 1910, only four years before the outbreak of World War I, nobody knew whether planes, dirigibles, or balloons would prevail. Within a period of 17 days, this question was on prime display, as the dirigible America tried to cross the Atlantic; huge crowds gathered at horse-racing tracks to watch airplanes race around overhead; and ballooning teams from around the world took off from St. Louis in pursuit of the Bennett International Balloon Cup, given to the balloon that traveled the farthest. The dramatic denouement would stun the country and lay the foundation for the air force. In Chasing Icarus, Gavin Mortimer has plumbed original and primary sources to paint a vivid picture of the launching point of flight, and an indelible portrait of the late-Edwardian world about to explode into war.

What listeners say about Chasing Icarus

Not bad but terrible reader

What would have made Chasing Icarus better?

Having someone read it that might have been excited about his job?

What was one of the most memorable moments of Chasing Icarus?

We're not in high school.

Having someone read it that expresses even a hint of excitement. This book was interesting in story but the person reading it made it the most depressing book I've ever listened to.

If you are going to charge me to listen to books you should actually get people good at reading and not people that have names. I could care less what the persons name is that reads your books, only that they do a good job.