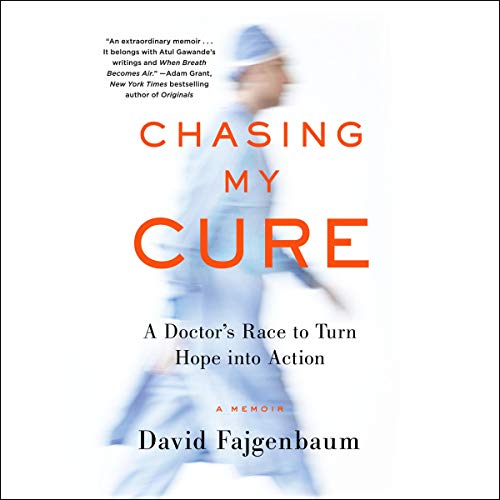 The powerful memoir of a young doctor and former college athlete diagnosed with a rare disease who spearheaded the search for a cure - and became a champion for a new approach to medical research.

“A wonderful and moving chronicle of a doctor’s relentless pursuit, this book serves both patients and physicians in demystifying the science that lies behind medicine.” (Siddhartha Mukherjee, New York Times best-selling author of The Emperor of All Maladies and The Gene)

David Fajgenbaum, a former Georgetown quarterback, was nicknamed the Beast in medical school, where he was also known for his unmatched mental stamina. But things changed dramatically when he began suffering from inexplicable fatigue. In a matter of weeks, his organs were failing and he was read his last rites. Doctors were baffled by his condition, which they had yet to even diagnose. Floating in and out of consciousness, Fajgenbaum prayed for a second chance, the equivalent of a dramatic play to second the game into overtime.

Miraculously, Fajgenbaum survived - only to endure repeated near-death relapses from what would eventually be identified as a form of Castleman disease, an extremely deadly and rare condition that acts like a cross between cancer and an autoimmune disorder. When he relapsed while on the only drug in development and realized that the medical community was unlikely to make progress in time to save his life, Fajgenbaum turned his desperate hope for a cure into concrete action: Between hospitalizations, he studied his own charts and tested his own blood samples, looking for clues that could unlock a new treatment. With the help of family, friends, and mentors, he also reached out to other Castleman disease patients and physicians, and eventually came up with an ambitious plan to crowdsource the most promising research questions and recruit world-class researchers to tackle them. Instead of waiting for the scientific stars to align, he would attempt to align them himself.

More than five years later and now married to his college sweetheart, Fajgenbaum has seen his hard work pay off: A treatment that he identified has induced a tentative remission and his novel approach to collaborative scientific inquiry has become a blueprint for advancing rare disease research. His incredible story demonstrates the potency of hope, and what can happen when the forces of determination, love, family, faith, and serendipity collide.

Praise for Chasing My Cure

“A page-turning chronicle of living, nearly dying, and discovering what it really means to be invincible in hope.” (Angela Duckworth, number-one New York Times best-selling author of Grit)

“Inquiring physicians have discovered much from studying patients with rare diseases, but rarely has the physician been the patient. Dr. Fajgenbaum tells his own remarkable story of fighting a mysterious, nearly fatal multisystem disease, and of his brilliant deduction that a long-known drug may be the cure. This book - part detective story, part love story, part scientific quest - shows how one indefatigable physician can bring hope to patients who suffer from a rare disease that is barely on the radar screen of medical science.” (Michael S. Brown, MD, recipient of the Nobel Prize in Medicine, 1985)

“This is a remarkable and gripping story of how a potentially fatal rare illness inspired the patient to commit himself as a physician/scientist to search for its cause and cure. Dr. Fajgenbaum’s description of his journey is a tale of courage, dedication, and brilliance that will enthrall and fascinate its readers.” (Arthur H. Rubenstein, professor of medicine, Perelman School of Medicine, University of Pennsylvania)

"“Moving... A powerful, highly personal chronicle of a doctor’s feverish rush to find a cure for the disease that afflicts him. Fajgenbaum writes with consistent urgency and great emotion.... Offering a distinctively uncommon perspective on disease and doctoring, Fajgenbaum also writes earnestly and frankly about the unique brand of humility one must accept as a medicinal healer with a mysterious, possibly deadly malady.” (Kirkus Reviews)

What listeners say about Chasing My Cure

Could have been far better

The author/narrator is college football player who went to medical school, came down with a mysterious, nearly-fatal illness, and participated in research that led to a treatment. The subject matter kept me listening until the end. However, young Fagenbaum is seemingly unaware of the world beyond football, his family and his church, and unable to place his experience in any interesting perspective. Worse, he is incessantly self-congratulatory. I don't recommend it.

Should be mandatory reading for all physicians

This outstanding book, a true story about the author, should be read and incorporated into the mind, body and soul of all physicians: those in premed, medical or DO training, GME residency or fellowship, academic or private practice. It should also be read by lay persons, insurance company executives, legislatures at the state and federal level, policy decision makes and health care management and pharmaceutical and biological corporate executives.
The message is delivered in a hopeful fashion. This should be embraced by all who have the honor and privilege of reading this amazing narrative.

I listened to this book and found it fascinating. It was horrible to hear of his disease, but also very enlightening. Since the author read his own book, I felt as though I was with him while he told his story. It was inviting and engaging. This book has left my mind reeling with thoughts about iMCD and other orphaned diseases out there. Thank you for spreading the word and sharing your story.

As a physician I found this book fascinating and totally compelling. Perfectly crafted, no extraneous words, a page turner. Shockingly good writing. Performance by the author, who reads the story, also perfect. I learned a lot about Castleman's and I was motivated by the book to read journal articles to learn more. Dr. Fajgenbaum's work is awe inspiring, and he may unlock the secrets of immune dysregulation.

Great story of one man's struggle with life and a rare disease. This story hits close to home. Wont be the last time I listen to this story.

An inspiration for those diagnosed with rare diseases

Especially those of us that share that diagnosis with being a healthcare provider ourselves. Thank you David!

Wow, pretty incredible tenacity and courage! I have a rare disease myself and this has inspired me to work hard to figure it out.

The book is narrated by the author which feels like a personal conversation . He is an excellent narrator which presses even more the need for medical research in all diseases .
A non medical person gains insight into the complexities of diagnosis , therapy , and still needed research of rare diseases .
The book is full of heartbreak but hope .

Anyone with an autoimmune disease will find David's story inspiring and the book a great resource.

The doctor faces rough odds and through pure grit and ingenuity, is able to create a new paradigm to find an already approved treatment for a life threatening disease. Admittedly not everyone would have the brain power, training and tenacity required to get this done. He is a Georgetown, Wharton guy. it's his resilience and relentless optimism that gets him through it.