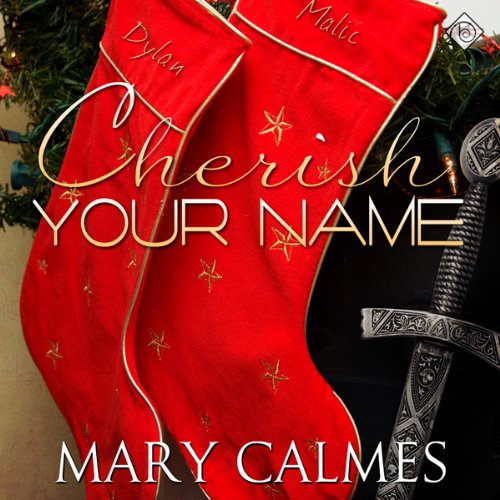 Malic Sunden is in hell—only not literally... yet. As a warder, Malic is used to fighting demons and squaring off against all kinds of creatures from the pit, but this year he’s facing a new and terrifying prospect: Christmas holidays with his much younger boyfriend and his family. He loves Dylan, his hearth, but Dylan’s parents, the Shaws, are another story. They think Malic is a cradle-robber, among other things.

At least their neighbor, Brad, seems to like him. Then again, maybe not. When Malic gets offered to a demon who wipes his memory of everything but Dylan’s name, it will take all Malic has to escape his new life in a hell dimension and return to the man he calls home.

What listeners say about Cherish Your Name

This was narrated by Paul Morey, not Schwartz.

I only recommend this for people who've read the first 5 books or at least the second book since you have to at least know how Malic and Dylan met.

Would you be willing to try another book from Mary Calmes? Why or why not?

I've already read several of her books, so yes. As long as the narrator isn't Andrew Schwartz.

When Malic was ensnared within the Demon's trap.

Who was the most memorable character of Cherish Your Name and why?

Ryan. Simply because he's my favorite warder and wasn't even featured a lot in his own book.

The metadata for this audiobook is incorrect. It says it was narrated by Andrew Schwartz, it wasn't. This was narrated by Paul Morey who is a million times better. If you hated the narrator in the first 4 books, don't worry... This was not done by Schwartz.

I have the set in audiobook format. I must admit to listening to them often. They are a fast read with great story development. Action and romance. My favorite is Cherish The Name. To get the most out of it read Tooth And Nail for character development. 5 books in all. I hope Mary Calmes adds to the series in the future. Especially with Malic and Dylan.

I love this series!!

This was a wonderful addition to a wonderful series. I loved that they showed more of this couple as well the first book of them seemed a bit rushed but this one fixed it and fleshed them out a bit.

you guys are going to love this story

the narrator was amazing I have read this story before and Paul Morey did great with narration for the story. Mary Calmed is one of my favorite authors and I can't wait to read more of her stories keep up the great work.

Not a memorable romance involving 'warders' who keep the world free from demons. Not recommended.

Best Narrator in this Series- Love Mal and Dylan!

Malic and Dylan are a couple but they still have a long way to go. Malic still worries that he’s too old for Dylan. Dylan worries he’s too young.

When they go home to Dylan’s family for Christmas, Dylan’s family isn’t exactly welcoming and Dylan ends up hanging out with his buddies more than Malic.

Mal, on the other hand, ends up hanging out with the neighbor – a seemingly nice guy with a broken leg in need of a helping hand.

But… he’s actually trying to lure Malic in for a demon’s purpose and it’s up to Malic’s love of Dylan to save him from the pit.

We get to see the whole gang again and get a really super sweet HEA.

Paul Morey does this narration and I loved it! I love his voice for Dylan and Mal and for the other warders.

I highly recommend this series and this narration.

If you could sum up Cherish Your Name in three words, what would they be?

What was one of the most memorable moments of Cherish Your Name?

The fight with the demon at Brad's house.

Have you listened to any of Andrew Schwartz’s other performances before? How does this one compare?

Yes and I like his voice so it was just as good as the last book.

If you could rename Cherish Your Name, what would you call it?

No Place Like Home. or Home is were your Hearth is.

Glad to see Malic and Dylan again...from "Tooth and Nail". Great addition to the Warder series!

I loved these two characters Dylan and Malic from "Tooth and Nail". I'm glad Ms Calmes wrote a second story about them. It shows background for Dylan, its simply a nice short story and I have listen more than once.

Would love 💘 more , but I suppose it would be hard to keep writing just about these guys when your brain will be full of more other worlds ... Thank you

Christmas expansion of Dylan and Malic's story. There is a lot of relationship growth and maybe some character development but mostly from Malic's side. Dylan was still willful, annoying and a kid.

I get Dylan's family having issues with Malic being 10+ years older than Dylan but no one made an effort to make it better. Not Dylan's parents and sister (like she had room to talk), NOT Dylan and not Malic, not that Malic could do much since he was a guest!. The 180 that happened after Dylan talked to his family was too quick.

The best part of the story was seeing how Malic starts to depend more on his fellow Warders and even better we get hints about the series not ending just yet. We can only but wait.

Very good narration by Paul Morey with distinguishable voices for the multitude of characters and feelings coming across.