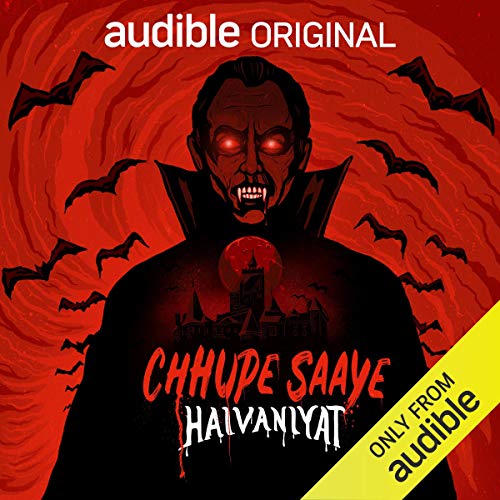 Chhupe Saaye, in its second season, continues to explore the terror and the darkness of the human spirit. In its quest for power and immortality, these demonic forces attempt to transgress the laws of nature and morality. The dramatic and grim conflict between Man and the Monster will keep you on the edge this time around too!

Season 2, Haivaniyat (D for Dracula) features a modern, dramatized adaptation of the Dracula. The lives of television anchor Meena and solicitor Jatin Dharkar are jeopardized after Jatin's encounter with Mr. Dracula. Is the enigmatic Dracula just a business tycoon or a sorcerer? Or is he something even more dangerous: a blood-sucking vampire, out to infect the world?

Chhupe Saaye: Haivaniyat is conceived and created by Indrani Chakrabarti, written and directed by Vinay Sharma and produced by EmVeeBee Media (P) Ltd.

Disclaimer: The show is for Adult listeners. This show is entirely fictitious and inspired in parts by classics, literary works, and any resemblance to real persons (dead or alive), places and/or events is purely co-incidental. This show is not intended to outrage, insult, defame or hurt any religion or the religious sentiments, belief or feelings of any person, entity, class or community, and does not encourage or propagate any superstitious beliefs, black magic and/or witchcraft. Listener discretion is advised.

awesome story since its basically from an English

mir was as usual awesome..but need to update some hindi words e.g bataunga can be used instead of batlaunga. and many more. but awesome job ...keep it up guys.

Dracula is a cinematic strory. Already the likes of bram Stoker , Stephen King and Francis ford Coppola has crafted a great work. For audio that to for hindi listners bring ing this story is a task in itself. Kudos to the team for a good effort.

I am disappointed with the storyline. Last season was far better than this. poor performance by actors.