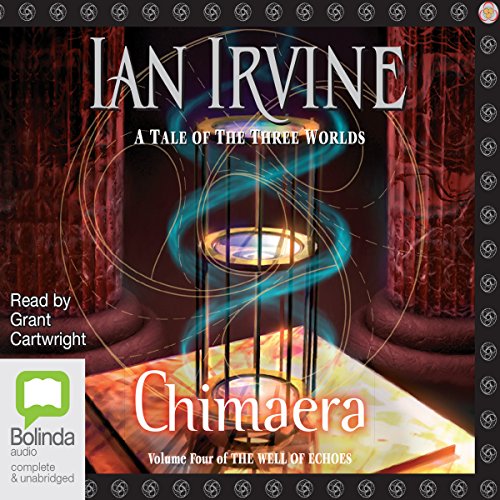 All resistance has been crushed. In a few minutes of overwhelming violence the Council's air-dreadnought fleet has destroyed Fiz Gorgo's defences. Xervish Flydd, Irisis, and their allies have been condemned to die in a brutal aerial spectacle designed to reinforce Chief Scrutator Ghorr's power and majesty.

Nish is their one remaining hope. But Nish is trapped in a burning watchtower, and hunted by both the scrutators and his former lover, Ullii, whose twin brother he accidentally killed. Before Nish can hope to rescue his friends, he must convince Ullii to spare him, then overcome the most powerful cabal of mancers in the world as well as the Council's 400 crack guards.

And even if he succeeds, to win the war the allies still have to defeat the scrutators and overthrow Nennifer, the corrupt Council's dread bastion, before the rampaging lyrinx overwhelm all Santhenar.

What listeners say about Chimaera

It gets very tedious, instead of being riveting. A longer book isn't always better if doesn't have substance. The performance was good.

The story is interesting but the narration really hurts the overall feel of the book. pronunciation drives me nuts like pronouncing melee as "My-Lah" I also have issues with recognizing characters because there is no real variation between characters making it more work than I would prefer when listening because I end up trying to figure out who said what. The ending doesn't really feel like it's a close of a chapter but it's interesting enough.

I enjoyed this series, although some of the characters can be quite painful in their attitudes. The story came to a good conlcusion. Then the author tried to restart the whole thing. Jal Nish reappears with no explanation of how he escaped the battle, survived and came to control the 'tears'. Too much for me, won't be reading any more of this series

I started this series in the third quarter of it, which I just figured out. Now going back to he beginning!!! Heck ya!

They were all amazing, couldn't pick a favourite!

Have you listened to any of Grant Cartwright’s other performances? How does this one compare?

Yes. He is an an amazing reader, love his accent too!

Loads of them, I cried and laughed with the characters all the way through.

not a hero by what you see a first glance

I am not sure if I dragged out finishing this book because I was sad to leave the characters or because there were a few slow bits. But it was still a great story and I am so pleased to have found Ian Irving, because there are lots more books to read. I like that none of the characters are perfect and those that seem the most flawed by usual heroic measure turn out to do the great deeds.