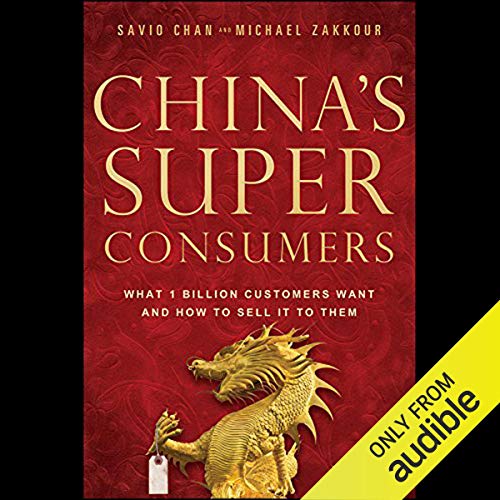 What 1 Billion Customers Want and How to Sell it to Them
Written by: Savio Chan, Michael Zakkour
Narrated by: Kevin Stillwell
Length: 8 hrs and 16 mins
Categories: Business & Money, Commerce

China has transformed itself from a feudal economy in the 19th century, to Mao and Communism in the 20th century, to the largest consumer market in the world by the early 21st century. China's Super Consumers explores the extraordinary birth of consumerism in China and explains who these super consumers are. China's Super Consumers offers an in-depth explanation of what's inside the minds of Chinese consumers and explores what they buy, where they buy, how they buy, and most importantly, why they buy.

The audiobook is filled with real-world stories of the foreign and domestic companies, leading brands, and top executives who have succeeded in selling to this burgeoning marketplace. This remarkable book also takes you inside the boardrooms of the people who understand Chinese consumers and have had success in the Chinese market. A hands-on resource for succeeding in the Chinese marketplace. Filled with real-world stories of companies who have made an impact in China. Discover what the Chinese consumer wants and how to deliver the goods. Written by Savio Chan and Michael Zakkour, two leading experts on the Chinese market. This book is an invaluable resource for anyone who wants a clear understanding of how China's super consumers are changing the world and how to sell to them.

Many good examples and case studies, very nice book for western audience to refresh the image of contemporary business world in China