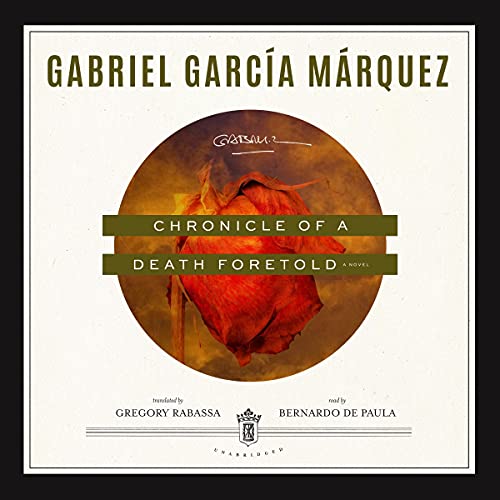 Chronicle of a Death Foretold

A man returns to the town where a baffling murder took place 27 years earlier, determined to get to the bottom of the story. Just hours after marrying the beautiful Angela Vicario, everyone agrees, Bayardo San Roman returned his bride in disgrace to her parents. Her distraught family forced her to name her first lover; and her twin brothers announced their intention to murder Santiago Nasar for dishonoring their sister.

Yet if everyone knew the murder was going to happen, why did no one intervene to stop it? The more that is learned, the less is understood, and as the story races to its inexplicable conclusion, an entire society - not just a pair of murderers - is put on trial.

What listeners say about Chronicle of a Death Foretold

Death that was always there

It was great, but not so great to read this craftsman again, rather listen to it, after having read it 25 years agio, while I was in JNU, as by listening it's impossible to attach one end to the another. it's best to read classics, more so the creator of magic realism that Morquez is known for!

What am I not getting here?

Very straight ahead story of a murder. Not overly graphic, no plot twists or mystery, no real suspense. It reads like a police report. I was excited to pick it up based on the reviews, but honestly there just wasn’t a lot here to enjoy. Still tho, it has great reviews (other than mine), so maybe I’m just missing something?

Short read and interesting story, especially if you like murder mysteries. Also, interesting cultural and societal exploration. Not my favorite story overall.