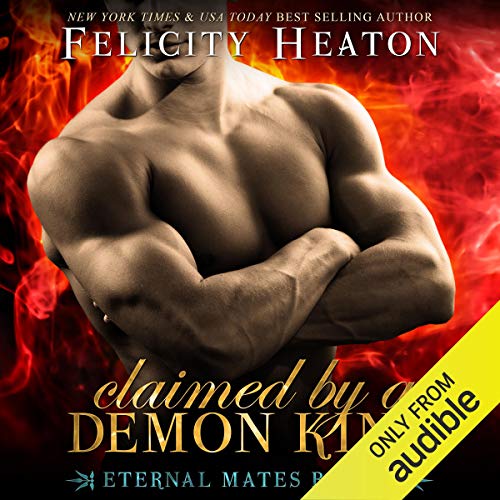 Claimed by a Demon King

The moment the demon King Thorne of the Third Realm set eyes on the mortal huntress, Sable, he knew she was his fated one. The fiery, dangerous female awakened hungers he had never experienced before, a dark craving and passion that has consumed him in their time apart. As the lunar cycle wanes, she enters his world again, and nothing will stand in the way of him claiming his forever with her - not the relentless assault from the Fifth Realm or the dark elf male determined to seduce her out of his grasp.

Intent on achieving the coveted position of commander at Archangel, Sable leads her small team into the dark underworld and the Third Realm, to a war where her allies are the very creatures she normally hunts - vampires, werewolves, and demons. Her eagerness to lead the deadly mission has everything to do with winning her promotion and nothing to do with the kingdom's brash, lethally seductive demon king - a king who stirred fierce desire and wildfire heat in her with just a look and an innocent touch when they first met and has been in her wicked dreams ever since.

As the gathering storm between rivals unleashes irresistible passion that flares white hot and the heat of the battle brings life-shattering realizations, can Sable place her duty before her heart? Or will she surrender to her deepest desires and be claimed by a demon king?

What listeners say about Claimed by a Demon King

AN ANGEL AND DREAMLAND IN HELL

I really like the books, however the female voice doesn’t change for any of the characters. It’s very hard to follow the story. Unfortunately I had to skip a lot of chapters when listening. I did go back to read my book. Very muck enjoyed the story.
I will try the 3rd book in the series since it a male narrator. Hopefully it’s better. If not then I’ll return all 3 books. The first 2 were horrible to hear.

Overall score: 3 1/2 stars.
This is book 2 in this series; the story of the demon king, Thorne and Sable, a human (or is she?)
Looking at this from a narrator’s perspective, Charlotte Wright’s voice is okay for the female parts but is lacking when it comes to reading ANY of the male roles.
I think I would have enjoyed this book more if I had just read it.

I liked the first book more, found the female lead annoying and at times stupid

Hard to keep up

the story felt incomplete. We never find out if Sable gains full access of her abilities. I hope it will continue in the next book. the ending was rushed.

Each book has its own wonderful love story, and keeps in touch with the characters of the earlier books. Very enjoyable. Recommend to anyone who enjoys paranormal romance.

I was intrigued, but Sable and Thorn are even better than I could have imagined. Highly enjoyable and surprising, this is a fast paced romance that I enjoyed even more as the storyline progressed. I highly recommend this unique love story.

great story building and characters , action packed, hard to put down. loved it, would recommend

I liked the main couple because the female is kind of a tomboy, a fighter not used to romance, while in the other hand you have a big guy doing whatever he can to be less scary and become close to her.

My favorite book so far!!! I love that I can get lost into the world felicity has created and wish we could be apart of. It was too funny and too hot!!! And a lot of action! I definitely recommend this series so far. I’m loving the characters and hope they all find their eternal mates. Can’t wait to read and hear more!

love the story of Thorne and sable .one of the best love story's I have listened to also have it in written form

An Explosive Paranormal Romance I Was Hooked!

I am already a fan of Felicity Heaton's writing style and I loved this story. We had already met our romantic couple in the previous book but it's within this story that the emotive romance really kicked off - what a ride!

Great world building as always, multi dimensional strong characters that I want to find out more about and a gripping background story! I really enjoyed Charlotte Wright's narration and feel that her reading pace, the subtle tonal variations she used during the different scenes and the way she slightly adjusted her voice for the characters' dialogue all did the book proud.

Claimed by a Demon King is a tale of inner and outer strength, of duty and responsibility and consuming passion, however, the beauty of the romance cements this as an epic love story.

As with all of Ms Heaton’s books, due to the graphic violence and sexual content, I’d recommend this book to adults only who are fans of relationship and romance stories with a bit of fire and passion.

i loved every word 😁 i enjoyed the reader too even if they where writing it was horrible...i liked her instead

Absolutely love this series of books

Where does Claimed by a Demon King rank among all the audiobooks you’ve listened to so far?

I really enjoyed this book. Looking forward to reading the rest of the series.

The detail in how everything looked allows you to picture the place and characters.

When the king was cooking hang over food

Some parts were funny as you could almost picture the reaction and expression on blue's face.

Well worth a read.

NOT SUCH A DEMON

Another fantastic read by Felicity Heaton
Where We see the HEAT that is on the War Field of the Third Realm & as HOT well maybe HOTTER in the warmth of his firs.
In this episode we see the heated connection between Archangel warrior Commander Sable (who we find out she's not exactly far off from her job title) and King Thorne who asks for his neighbouring Kingdoms to side with him against the Fifth Realm....

Claimed by a demon king

2nd time around listening to the audio of the eternal mates still as good as the first time around...