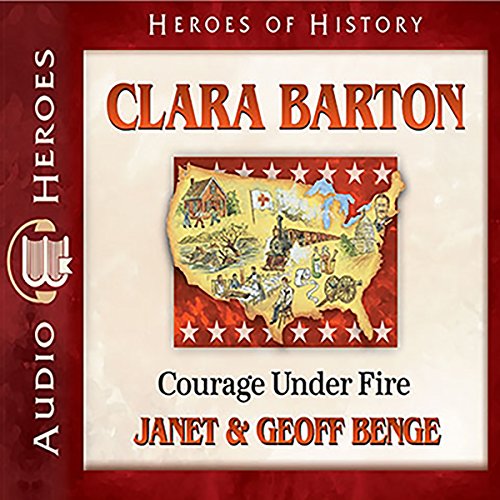 Clara pushed herself to work faster. She had to get the wounded soldiers onto the train before the Confederates came over the hill. A messenger galloped up just as the last man was loaded aboard. "You have to go now!" he shouted. "The enemy is breaking over the hills. If the train is stopped, you will have to escape across country!"

Known during the Civil War as the "Angel of the Battlefield", remarkable Clara Barton risked everything to save countless lives on the frontlines of battle. Once a painfully timid child, Clara was as bold as a lion when it came to helping others, whether wayward schoolboys, natural-disaster victims, or dying soldiers. Clara fought for US approval of the Geneva treaty for the care of war wounded, organized the American Red Cross, and tirelessly dedicated her life to its service. Her courage and compassion impacted thousands of people around the globe - black and white, Christian and Muslim, Spanish and American, Confederate and Union. An incredible story of service and sacrifice (1821-1912).

The stories of Heroes of History are told in an engaging narrative format, where related history, geography, government, and science topics come to life and make a lasting impression. This is a premier biography line for the entire family.

What listeners say about Clara Barton

Just goes to show you that God loves everyone.

It's beautiful how God shows his love for us, not caring about your skin color, your nationality, or weather your rich, middle class or poor. He loves you because he created us, and die for us. We show also give a helping hands to those in needs just like Clara. B. There is a well insight in this story about caring, loving, our neighbors and those in need. Just go out there and show people that there is still others Clara Barton out there, that they are not alone, God is there and he sends his children's to help those in need regardless who you are.

Clara Barton goes down in my book as one of the most amazing women in all of history! Instrumental in creating the American Red Cross, not to mention the thousands of lives that she saved on the battlefield herself.