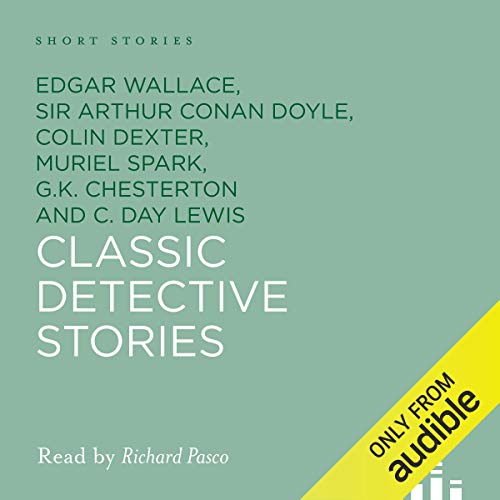 This collection features some of the greatest fictional detectives ever, including: Sherlock Holmes, Hugh "Bulldog" Drummond, Father Brown, Morris Klaw, and Inspector Morse, amongst others. Reader Edward Hardwicke, who played Watson to Jeremy Brett's Holmes in the early 1990s, makes an ideal reader for the genre.

The unabridged stories here are:
"The Green Mamba" by Edgar Wallace
"The Poetical Policeman" by Edgar Wallace
"The Dying Detective" by Sir Arthur Conan Doyle
"The Burglar" by Colin Dexter
"The Man in the Passage" by G.K. Chesterton
"The Assassins' Club" by C. Day Lewis writing as Nicholas Blake
"The Case of the Tragedles of the Greek Room" by Sax Rohmer
"Chimes" by Muriel Spark

What did you love best about Classic Detective Stories?

I liked the narrator a lot. I liked the more classic, country stories rather than the detective stories of less refined characters!

I liked the Sherlock Holmes stories.

A fun segment of short stories. I recommend for casual or leisurely listening or an intro to classic mysteries.

Pause between the stories, please!

Pause between the stories, please! I needed a little time to digest one complex case before rushing on to the next, and there wasn't even a second's gap in which to hit the pause button. Otherwise excellent.