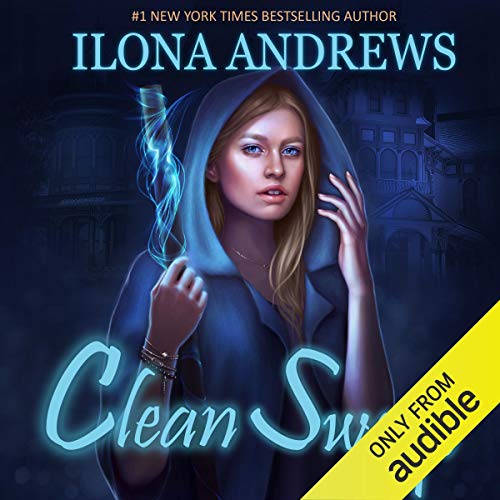 On the outside, Dina Demille is the epitome of normal. She runs a quaint Victorian Bed and Breakfast in a small Texas town, owns a Shih Tzu named Beast, and is a perfect neighbor, whose biggest problem should be what to serve her guests for breakfast. But Dina is...different: Her broom is a deadly weapon; her Inn is magic and thinks for itself. Meant to be a lodging for otherworldly visitors, the only permanent guest is a retired Galactic aristocrat who can’t leave the grounds because she’s responsible for the deaths of millions and someone might shoot her on sight. Under the circumstances, "normal" is a bit of a stretch for Dina.

And now, something with wicked claws and deepwater teeth has begun to hunt at night....Feeling responsible for her neighbors, Dina decides to get involved. Before long, she has to juggle dealing with the annoyingly attractive, ex-military, new neighbor, Sean Evans - an alpha-strain werewolf - and the equally arresting cosmic vampire soldier, Arland, while trying to keep her inn and its guests safe. But the enemy she’s facing is unlike anything she’s ever encountered before. It’s smart, vicious, and lethal, and putting herself between this creature and her neighbors might just cost her everything.

What listeners say about Clean Sweep

This is a good storyline and I enjoyed it. I'm not one to even write reviews but I have to say, the narration is really hard to listen to. This narrator has this soft whisper voice that almost puts you to sleep. It also doesn't match the main character at all. This narrator sounds like an old southern woman and the main character is supposed to be under 25. I'm trying to decide if I can get used to it enough to listen to her in the second book.

The narrator is tedious and ruined the story for m

I love the writing team that is Ilona Andrews and their Magic series. Kate is a strong, smart female lead who is also balanced with humor and softness. I expected something similar coming into Clean Sweep. The idea is a good one - a magical inn and innkeeper who is supposed to maintain neutrality amidst the magical goings-on outside her property's boundaries.

I just never felt invested in this story or any of the characters. Dina is in no way equal to Kate (from the Magic series) - this character is markedly weaker and wishy-washy with none of the sarcastic humor from either the Magic or Edge books. Additionally, the narrator was verging on ridiculous and obnoxious constantly which definitely took me out of the story. She has an overly fake sweet tone that grates and then she over accentuates the Southern accent to the point of parody - almost as if she were trying to be offensive. I found myself just not wanting to finish the book at all as a result. I may try again later

Juat a mess all round, way too any lines going on at once, too many planets, dramas, plot points. It was messy and nothing was really completed, just left to change tac again. I live for ilona's books but this was a monstrosity....the narrator plays everyone off as far older than they are. No 24 year old would speak with those inflections for example. All round a very disappointing book.

Story was good, narrator did not fit.

I had first read this book when it came out. I loved the premise that it was an "urban fantasy" with a sci-fi twist. I am a big fan of the author, so when I saw that the second book of this series was coming out, I decided to brush up on the first one by listening to the audio version. I was a bit disappointed in the choice of narrator. Looking at other audio books from the same author, it appears as though they contract the same woman to do all their books. While she is a very fine reader, her take on the character and the accent she used just did not fit. The main character of this story is a young girl in her twenties. Although she originated from Georgia and settled down in Texas, I would almost rather the narrator not use an accent then try a southern one. Between her accent and her cadence, she sounded more like a matriarchal southern belle than a young woman in her twenties. It was hard for me to believe this character was a young woman just starting out and rather an older woman who wanted to serve lemonade and cookies to the neighborhood kids. I think that, although she may have been fine for other books, they may want to rethink this narrator for the next installment.

I'm a avid fan of Andrews and Raudman. After giving this book a 2nd listen, I hate to say it... I'm ...disappointed. The story is interesting, but in my opinion, Ms Raudman's narration is a complete miss. The reading is excruciatingly slow, drawn out even further by a rhythm that drove me to turn it off many times. The main character, written to be a sharp young Southern woman in her early 20's, is brought to life as a vague old Southern granny. I just couldn't stay focused. IIona Andrews, you're terrific. I'll definitely get the print version of the next one. Renee, thumbs way way up on your other narrations.

A MUST LISTEN. Promising start for a new series.

I put off reading the Kate Daniel's series by husband and wife writing team, Ilona Andrews, for years for a reason that I can not recall. The series is now one of my favorites, and their new Innkeeper series is off to a very promising start. Intelligent, likable characters portrayed in a believable world of fantasy, what is there not to like? Really, really looking forward to listening to the next book in the series.

If you like Urban Fantasy, you must check out the work of this talented writing team. AND let's not forget Renee Raudman, she is an awesome narrator! She makes the characters come to life as if you are overhearing a conversation, not having someone read you a story!

The narration volume going so quiet practically whispers I couldnt hear it and that means I probably missed alot of important info. oh well, not about to go back and listen again anytome since I am still recovering from the anooyance with how she said "wuff" or "woof" instead of wolf. seriously, by the end I cringed and groans aloud every time I heard it. The story was interesting a good start to a new series didn't grab me as much as the Ilona Andrews Kate Daniels series.

What a new concept, an Inn for paranormals to stay, during their travels. A sentient Inn which is also considered neutral ground and a sanctuary. So any intergalactic or non intergalactic guest can stay here.The story opens with the death of a 3rd dog in the neighborhood. The deaths are vicious, with the animals being eviscerated. Dina is our heroine and Sean is our reluctant Hero, who is also a former Navy seal and a shifter, and is very ignorant of his world, and Arland a vampire who has the makings of being another love interest for Dina.
The world building is unique, presently the inn only has one guest, and she is quite scary. There is also a back story regarding the Inns and Dina's parents, that I am hoping will be further explored in the next book.
My favorite character though was Dina's dog, a lil shi tzu name Beast! LOL This was a fun, engaging book and with some LOL moments.

The concept of this series -- a magical inn and innkeeper with a symbiotic relationship -- is a very interesting one. I found the back story of vampires and werewolves coming from other planets with complex histories to be too much. It was just excess baggage and not particularly interesting.

The innkeeper/heroine is aged 24 but the narrator sounded at least twice (possibly three times) her age. Because of that, the voice and the story line never meshed for me. I'm sure the narrator would be fine for other books, but she was a terrible choice for this one.

Couldn't get past the narrator

I'm sure the story would've been great but the narrator sounded like an old woman and the dissonance was just too much.

I found this book so slow, calm and uneventful. The world and characters was limited, as well as the story. Throughout the book, you have a feeling that there is a prequel or otherwise necessity for an explanation as the characters and their circumstances. It's not that it was so dry and boring, it's just that it was slow.

Having read a range of other sci-fi books, this one lacked sufficient imagination and the allure of sci-fi books in general. I've attempted to read other books by this author and I have come to the conclusion that her style is not appealing to me. And as for the narrator, her slow monotone and slight twang make the book even slower. I gave the book 3 stars only because somehow, I was persuaded to read/listen to it till the end (i.e. finish it).

I was bored. Not for me. I didn't feel I cared about the characters or the story.

different to the magic series and you fall i love with it just the same. Team Sean!!

Lively and fun, full of surprises.

I bought this on the basis of the blurb, which made it sound like fun, and the large number of good reviews.

The reviews are fully deserved, and I’m delighted to add my own. Imaginative, entertaining, full of surprises, blending elements from the supernatural, fantasy and science fiction genres.

I really enjoyed this, an excellent start to a series with three interesting characters. Ilona has a clearly-imagined fictional world full of detail, but I enjoyed her writing style which left me to fill in the visuals. She avoids information dumping by taking the reader along and giving them enough to figure things out along the way.

I bought the Audible audiobook version, well-narrated by Renee Raudman. The second book in the series will be in my possession soon, and the third as soon as it’s available from Audible.

Ilona Andrews is a superstar

One of the best fantasy writers ever...
As for all of the books by this story has it all.. Great storyline, depth and details..

The narrator is doing a great job...

Full house on all parameters..

narrator put me to sleep!

not for me, did not like narrators drawl. story content not enough to compensate. gave up after 2 hours.

If you can get past the awful fake Southern draaaawwwwl of the narrator, the story did start well. The accent and painfully slow speech of the reader was just unbearable, so I gave up after a few minutes.

I enjoyed the storyline and the characters were very believable. Got the next book lined up ready to go.

This book had an interesting concept, an Innkeeper who runs a mystical, sentient inn that welcomes every magical creature. Lighthearted and enjoyable.

Read all this series and loved it... thought I’d revisit by Audible. Soooo disappointed with the narrator, I’m sorry but the narrator sounds like an much older lady when Dina is so young. Just doesn’t gel with the whole story. Hope it’s redone in the not too distant future.