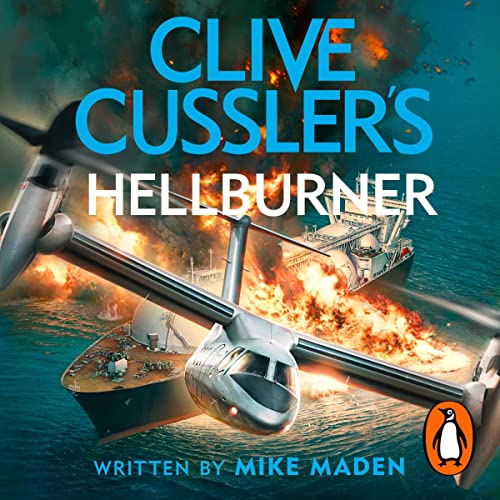 When Juan Cabrillo fails to capture the leader of Mexico's most dangerous drug cartel and loses an Oregon crew member, he wants revenge. But the explosion he narrowly escaped was merely the latest from a decades-old machine of war.

Cabrillo's Corporation may have finally met its match in The Pipeline—a criminal syndicate with a torpedo so deadly it could level entire cities. With millions of innocent civilians under threat, the Oregon's crew must unravel a tangle of drug-smuggling routes and international conspiracies spanning from the Aegean Sea to the Indian Ocean, and find the weapon before its countdown hits zero.

Death of the series

This story was D.O.A. when I started listening. This author just did a pick and mix from the rest of the series. Repeating character backgrounds and just changing the bad guys names and the name of the super weapon that was to be defeated.

This is my favourite series and I love the characters.
this was a new twist and I enjoyed it very much.

thanks, can't wait for the next one !

Mike tells a good yarn complicated with lots of characters with names easy to confuse. I would not recommend for listening while driving.

Phew, I loved this.

I think Mike Maden did it outstanding job of keeping the Oregon Files latest saga alive. So much so it was hard to see any change. Jan Cabrillo is still 007 Jason Bourne and all the rest of the heroes
sewn into one which I absolutely love and if it wasn't the case I wouldn't read these stories. Superb escapism.
Scott Brick is always a pleasure to listen to such a great narrator. and highly recommend this and others he's worked on.

Clive has a Second

Maybe it was because the narrator was the same, or maybe it was because Mike had collaborated with Clive before, but.,..... I didn't notice any change at all.
I had been worrying that I had lost a few "friends" with the loss of CC.
I look forward to more from these characters.

Nearly as good as the originals.

Almost as good as Cusslers. Some slight character and wording changes but nothing serious to worry about. I was nervous about it being a disappointment but I shouldn't have worried.

I guess I will give up on Cussler's legacy. Writer missed out. I know won't get my money back, sadly.

Not as good as the rest.

Unfortunately you can tell we have a different writer here.
There was no build up to the story, Some of the scenario's were so far fetched they couldn't be believed JC nearly always had a plan AB and C. Hux is Hux not Julia, Murph and stony are nerds and always have been but now all of a sudden they have other roles. There was always a description breakdown of the Oregon capabilities but nothing and being a NEW OREGON we was still in testing faze on the last book of her new armament so i was looking forward to finding out how she faired as always recapped previously in other books.
Somehow JC has turned into suoerman i mean how superhuman can someone be to hold on to a nuc travelling underwater whilst doing his stuff.

Its just all wrong and didnt appeal to me at all, and after reading all other Oregon files more than once, this one will be my last unfortunately.

Scott Brick as always did a great job but you could tell even he had to change the way he narrated the Story.

As for the Story itself it seems to go back and forth far to much with to much description at times and also finishing a scenario prematurely .

Considering the total book time 90 odd chapters is too many and i dont think any other CC book has that many.

Its a shame but it's a push for 3 stars from me.

Brilliant in the tradition of Mr Cussler. Thank you for keeping the stories alive. Highly recommended for Cussler fans.

Loved this new story, brilliantly written and read
Looking forward to more from Mike Maden and his contributions to the Cussler legacy

Great story, great narration by Scott Brick wish it didn't take so long to produce. looking forward to next one.